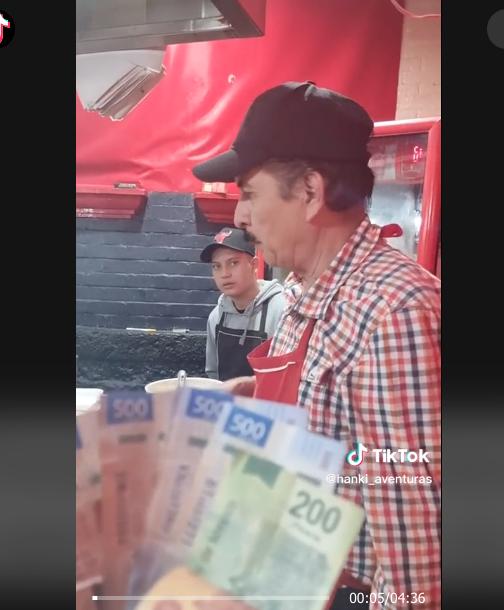 Undoubtedly, one of the best and most representative dishes within the national territory are tacos, since this food is part of the basic diet of millions of Mexicans, who, due to its practicality and flavor, consume it on a regular basis, which is why in the last few hours, a taquero goes viral, for a short video in which he is challenged to prepare as many tacos as possible, in a minute.

It should be noted that tacos are one of the most traditional foods, since their origin dates back to pre-Hispanic times, it is said that they were used as a plate, spoon and food, also becoming the most practical way to transport food from one place to another. other.

According to specialized gastronomy media, it can be estimated that on average a person in Mexico consumes around 5 tacos, which is equivalent to an intake of at least 375 grams of food per occasion.

It should be considered that the role of tacos for Mexicans is not only due to a simple gastronomic whim, since they play a very important role within the Mexican economy, since it is estimated that there are little more than 46,983 registered taco shops, of which 2,862 are in Mexico City, 3,088 in Jalisco, and 970 in Nuevo León, making these three cities taco mecca.

Read:  Philip Morris does not give up and goes for the business of snuff and chewing tobacco

An important part of this national dish is the practicality and speed with which it can be prepared, which is why it results in one of the main foods for both workers and students, ease of preparation, which has been put to the test in a viral video, in the one that challenges a taco maker to prepare all the tacos he can in less than a minute.

Without a doubt, tacos are a fundamental part of the national economy and gastronomy, so much so that these, together with Tequila and the catrina, are part of a graphic representation within the collective, social, and current unconscious, for which, in addition From being a highly consumed food, its figure has been chosen to illustrate all kinds of products.

Mauricio Gutiérrez, new ambassador of Corporate Excellence – Center for Reputation Leadership in Mexico
AMLO thanks businessmen for joining the anti-inflation plan to stop the rise in the basic food basket
Brazil Senate Cites McDonald’s and Burger King for Misleading (Very Misleading) Advertising
“Thanks to these videos you can save at Bodega Aurrerá”; user thanks community