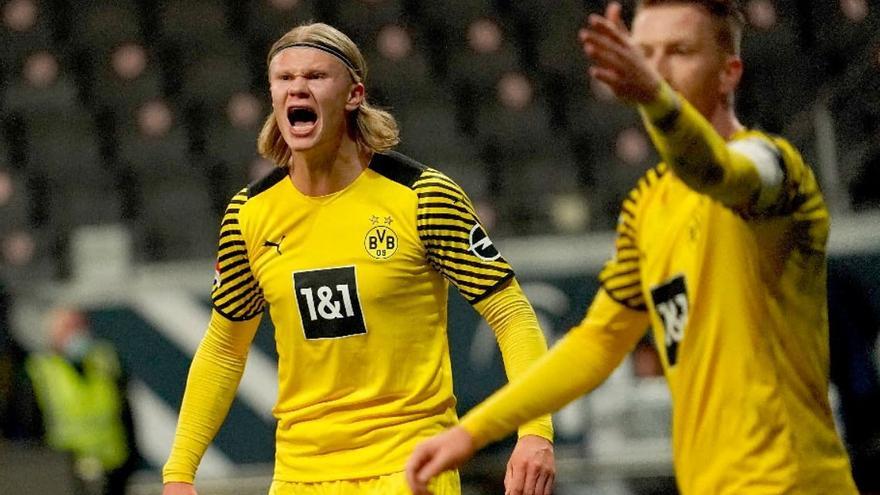 Bayern Munich fell to Mönchengladbach last Friday and opened the door for Dortmund to reengage in the title fight. Everything seemed to indicate that Borussia was not going to take advantage of the Bavarian gift but a comeback in 20 minutes, in the closing stages of the game, gave three gold points to the ‘Borussers’ who are six points behind the leadership.

Erling Haaland spent the afternoon in white, but he did an assist and played an important role in the winning goal, by winning a decisive duel before Mahmoud Dahoud’s shot.

Dortmund were in control of the game for the first 15 minutes and then Filip Kostic and Borré appeared and completely reversed the commitment. Kostic put the ball into the center of the area where Borré put his right leg to beat goalkeeper Georg Kobel.

It was the first shot on goal for Eintracht that gained confidence with the goal and began to have control of the actions. Kobel had to deflect Kostic’s shot for a corner kick. But Borré reappeared to mark the second. The play started again at Kostic’s feet with a cross from the left who was left swimming in the area after Kamada missed a first rebound opportunity. Borré stole the ball in the middle of the disorder and defined.

Things could have gotten worse for Dortmund in the 29th when Ndicka slammed a ball into the post. Dortmund seemed to have lost the north. Only towards the end of the first half did he manage to bring danger back to Trapp’s goal from a corner kick.

In the second half, Dortmund continued to have the ball more but the 3-0 had been too close again and the game seemed to be on track for Eintracht. After the first hour of play, however, Dortmund began to have more presence in the area. Dortmund’s first shot in the second half came in the 60th minute, a deflected shot from Haaland. It was Hazard, who had entered minutes before, who laid the first stone of the comeback.

In 87 the tie came, with a header from Jude Bellingham to the center of Meunier from the right and Dahoud unleashed the ‘borusser’ madness with the winning goal.