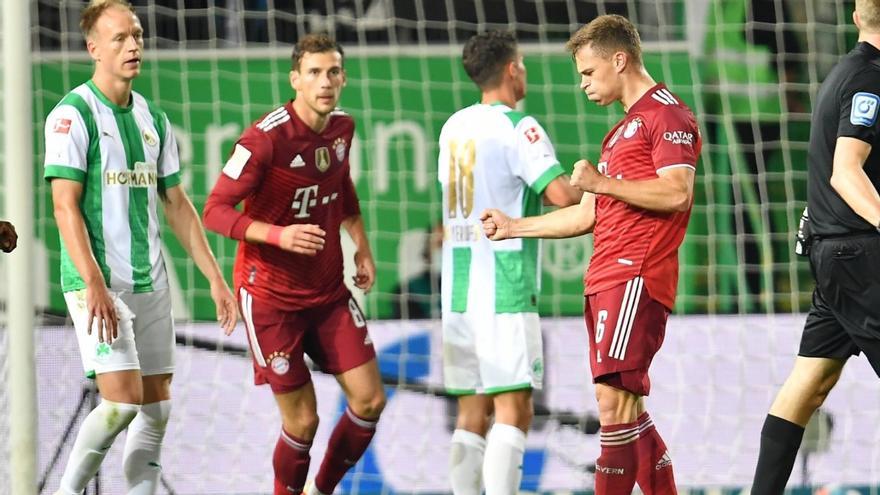 Bayern did their homework against the bottom of the Bundesliga but Lewandowski was left to zero. The Pole did not score with the Bayern shirt and to get an idea of ​​the paranormal that this event is, it had not happened since February 5, 2021 against Hertha in Berlin. 19 matches in a row scoring, the twentieth did not achieve it. Messi’s record at Barça was 10 games in a row, Cristiano’s at Madrid was 12. A madness for ‘RL9’.

Bayern opened the can after ten minutes of the match. The offensive faith of Greuther Fürth punished them and the Bavarians took advantage of the defensive nakedness of the locals. Sané’s speed, even more than a Davies who occupied a position of extreme left and center back It was picked up by a Müller who finished off first at the bottom of the tights.

Naglesmann’s men were at half throttle, but the superiority was enormous against a newly promoted team. Bayern worked to achieve 0-2. A combined play in the front of the area that ended Kimmich in the purest Kroos style. That pass to the net with such a traditional thread from the Real Madrid midfielder. Adjusted to the stick. A great goal in every rule.

Read:  The 30 most admirable photos from matchday 10 of the Tokyo Olympics

Lewandowski was able to maintain his streak minutes before the break but the wood spat his shot. The Bavarian peace ended within three minutes of returning from the holiday. Pavard saw the red card direct for an unnecessary entry being the last man and leaving Bayern with one less. It was no longer worth going to half gas.

Nor is it that the bottom of the Bundesliga changed the picture much. He was more dedicated to avoiding a win than trying to close the gap to put Bayern in trouble. And that never works out against Munich. The third fell in a goal that, at first, It looked like Lewandowski but no. It was Griesbeck who touched the leather to score the own goal.

With the 0-3 the local team was released and even added the goal of honor, the work of Itten. Bayern have scored 41 goals in their nine official games so far. A greased machine.