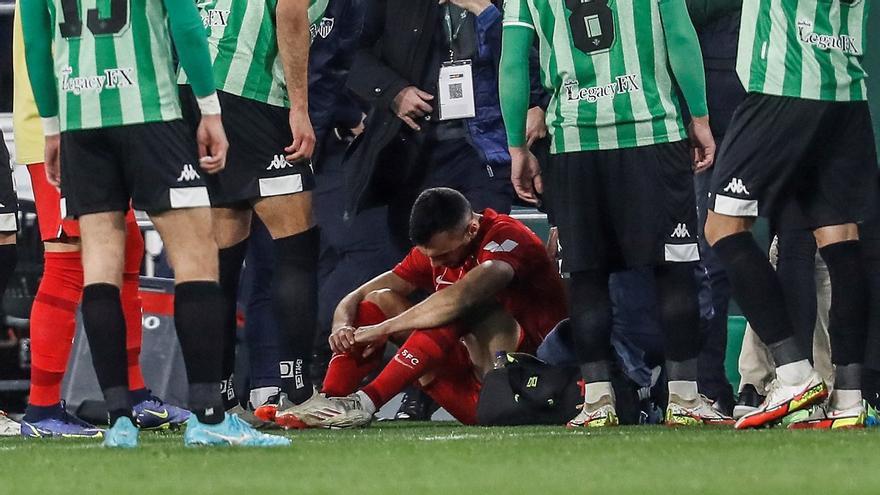 It had to be a beautiful football night. Like all those with duels between Betis and Sevilla in between, but it was dyed black by a madman from the stands throwing a plastic bar that hit the head of the Sevilla footballer Joan Jordán and forced the referee of the match, De Burgos Bengoetxea, to suspend it.

The vandalism act occurred in the 38th minute of the match, just after Betis managed to neutralize Papu Gómez’s initial goal with an Olympic goal. After a few minutes of uncertainty, De Burgos Bengoetxea ordered the two teams to go to the entrance to the changing rooms and later the decision was made to suspend it.

Fortunately, Jordan was able to walk off the field under his own power with no visible damage, albeit slightly shaken. Now, it remains to be seen what will happen, although the logical thing is that the duel resumes behind closed doors in Benito Villamarín himself and the verdiblancos receive a fine as punishment. It should be noted that the behavior of the Betis fans was impeccable after the attack on Jordán with chants of reproach to the fan who threw the plastic bar on the Sevilla player.

Before the shame there was a Great Derby. And Betis was better, although the scoreboard did not finish reflecting the superiority of Pellegrini’s men over the second-placed team in the League. The Cup is something else and the verdiblancos came out to bite into the pressure carried on wings by a crowd that still did not know what was going to fall on them.

Read:  Corrientes: they shot a deputy from the Frente de Todos in the middle of the campaign

In the warm-up he had been injured Koundé, who forced Lopetegui to delay the position of Gudelj and give input to Oliver Torres at eleven. From his boots, despite not being seen much, was born the goal that put Sevilla ahead on the scoreboard. He stole a ball on the right wing and enabled the papu gomez at the front of the area, from where the Argentine put it into the net close to the left post of Rui Silva’s goal.

Until then, Betis had been better, but they were screwing up in the final meters. Edgar, Canales had had it and they had even annulled a goal against Borja Iglesias for offside. But it was necessary to hit the center of the target. and i would Fekir just three minutes after Papu’s goal from a corner kick that the Frenchman magically converted into an Olympic goal. It’s what geniuses have. The former Lyon player celebrated his renewal with a flag goal.

And then, fade to black. The fool threw the plastic bar into the field and the party came to an end. Fortunately, according to the latest information at press time, the aggressor has been identified and has already been arrested by the Police. Jordán, meanwhile, was transferred to the hospital at the end of the meeting to undergo medical tests. It is not the first serious incident in a Great Derby: Juande being bottled, assaulting a security guard with a crutch, punching Toni Prats, fights between ultras… But let’s hope it’s the last. For the good of football.

Starbucks pulls out of Russia three months into conflict with Ukraine

Phishing Scam Steals $438,000 in Crypto and NFT Due to Beeple Account Hack