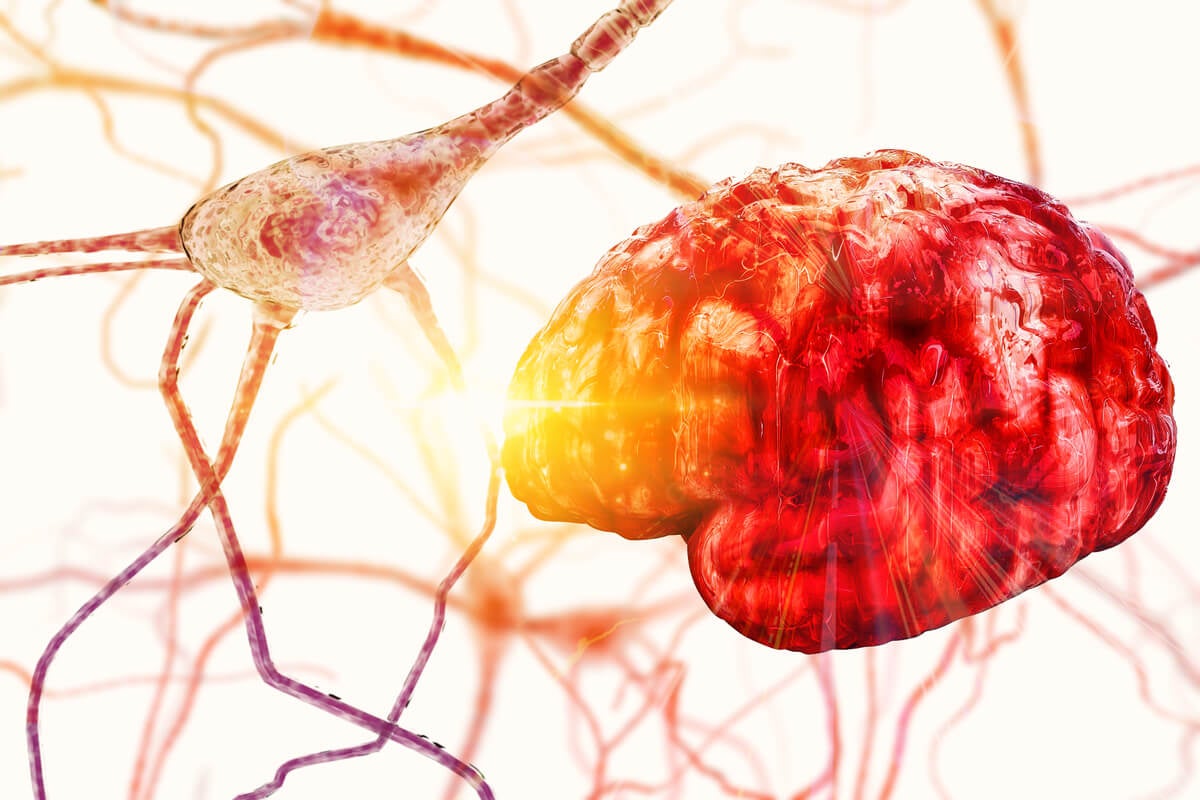 Neurons are highly specialized cells that form a kind of “information highway.” Their signals travel at the incredible speed of 250 miles per hour and all the time they are connected, although they never touch each other.

Neurons are the cells that make up the nervous system. They are highly specialized and fulfill the function of transmitting information throughout the body. They do it through electrical impulses: a true wonder of nature.

Due to neurons it is possible to perform several of the basic functions of intelligent life. They play a fundamental role in movement, perception and reasoning. To do this, they use a very specialized structure, which we will talk about below.

Parts of neurons and their characteristics

Neurons are the functional and structural unit of the entire nervous system. They are composed of different parts and each of them has specific characteristics and fulfills very specific functions. Let’s see what those parts of the neuron are.

It can be said that the soma or cell body is the “control panel” or “command center” of neurons. It is the widest area and houses the cytoplasm and nucleus. It is oval in shape. There is also all the genetic material of this cell.

The processes necessary for the neuron to stay alive are carried out in the soma and those so that it can fulfill its function of transmitting electrical signals adequately to other neurons.

Dendrites they are small extensions that are born from the body or soma. Together they make up a kind of network that covers the entire center of the neuron. What they do is capture the chemical signals sent by the neuron that precedes them.

After this, the dendrites send that information to the body of the neuron. This causes the cell to become electrically activated. In sum, receive chemical information and transmit it so that it becomes electrical signals.

The axon is an extension, like a kind of tail, that comes out of the body of the neuron. Its length varies, depending on the area of ​​the body in which it is. It is located at the opposite end of the dendrites. Its function is to take the electrical impulse and lead it to another area called the “synaptic button.”.

The nucleus of neurons is the structure that contains DNA of this; that is, the genetic information of the cell. Therefore, from there control is exercised over everything that happens in the neuron. In general, it produces the energy that the cell requires in order to function.

Myelin is a layer that surrounds the axon of neurons. It is not continuous, but is present in pieces, with a gap between them that is not more than one micrometer in length. It is made up of proteins and fats, and its function is to allow the electrical impulse to travel through the axon at the correct speed.

It is also known as “Nissl bodies.” It corresponds to granules that are present in the soma of neurons and dendrites, but not in the axon. It is a true protein-producing factory. The latter are essential for the transmission of electrical impulses.

READ:  The care that your baby's girdle needs

Ranvier’s nodules are the areas of the axon that are not covered by the myelin sheath. That is, the spaces between one portion of myelin and the other. Through these, sodium and potassium enter the neurons. This helps the electrical signal travel faster and smoothly. through the axon.

The synaptic buttons They are branches that are in the final part of the axon. These they take the electrical signal coming out of the axon; then they emit chemical signals that must be picked up by the dendrites of the next neuron. They are also known as “axon terminals.”

This zone is morphological, but not functional. In other words, it must be mentioned as a part of neurons, but it does not have a specific role. It is the narrowest part of the body of the neuron and gives rise to the formation of the axon.

There are some components that, strictly speaking, are not part of the neuron. Nevertheless, are essential for its operation. These components are other cells such as the following:

Not all neurons are the same. They differ from each other by the function they fulfill and, from that point of view, there are four types, as we will see below.

These are the neurons that receive stimuli from the external environment. Such stimuli can be perceived through the five senses: sight, smell, touch, taste and hearing. They are also responsible for transmitting the signals emitted by the internal organs to the brain.

Motor neurons emit the signals from the central nervous system to the muscles. In response to these electrical impulses, movement occurs in the body, according to the specific needs in each situation.

This type of neurons is responsible for carrying out an intermediation function. What they do is transmit information between sensory neurons and motor neurons. They ensure that messages are transmitted and received in the correct way.

Relay neurons are large. They fulfill the role of transmit information from one part of the central nervous system to another part of it, without the need to go through the peripheral nervous system.

How does a neuron work?

Neurons function as an information highway through electrical signals that are transmitted from one cell to the other. The process is cyclical. When the information reaches the end of the axon, it passes to the synaptic buttons.

There, particles called neurotransmitters are released.. Some of them are lost, but others enter the dendrites of the next neuron. When this happens, the dendrites transmit that signal to the body of the neuron. That activates the electrical signal, which goes to stop the axon to start the cycle again.

Neurons and their complex system of connections

It is estimated that a single neuron can have between 5,000 and 200,000 synapses with other neurons. In fact, it is through a complex system of trillions of neural connections that the brain can organize and process information all the time.

On the other hand, the human brain is believed to have between 67 and 87 billion neurons. Although the basic classification of these cells is of four types, as we explained before, but up to 10 000 different types of neurons are spoken of in other classifications.

The states of Mexico that offer the LOWEST salaries to doctors