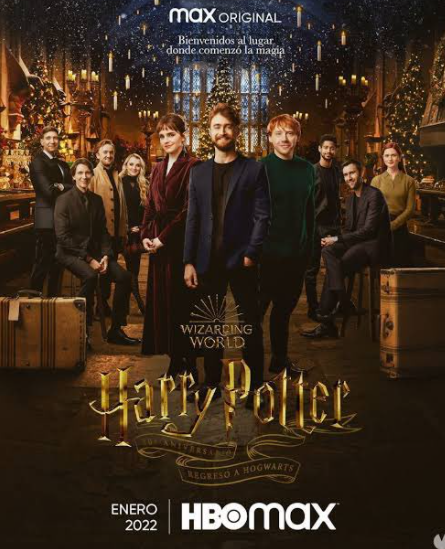 2022 came with a trip to nostalgia for Harry Potter lovers, and the HBO Max platform was the train that took them back to the most famous School of Witchcraft and Wizardry in the world.

After 20 years since the first film in the series was released, and 10 years after the last film came out on the big screen, the Harry Potter cast returned to its origins.

Just as HBO did with “Friends: The Reunion” -but much better-, we were able to see together Daniel Radcliffe, Emma Watson, Rupert Grint and more than a dozen actors and actresses who gave life to a character in history .

The same scenarios in which the magic was born were filled with memories, anecdotes and filming secrets, resulting in close to two hours of exclusivity for the fans, who manage to review each of the films and learn about part of the creative and cinematographic development that exists. behind them.

No matter how scripted the special is, every minute makes you feel the true magic that accompanied a whole generation and marked an era; it’s like watching a condensed version of the classic eight-movie marathon and feeling like you’re using the “time turner”Well, they are 20 years of physical and internal transformations of the interpreters who also grew up with you.

And, although it was already known, the lack of the writer JK Rowling is noticeable during the two hours of longing, her very brief appearances did not go unnoticed by the fans, who felt her exclusion from the set, as if she had not received the invitation to Hogwarts.

However, despite that great gap, the reunion of Harry Potter was as magical as expected and with the dazzling Christmas atmosphere that we all know, where a tribute was even made to those who are no longer with us as Richard Harris (Albus Dumbeldore ), Alan Rickman (Severus Snape), John Hurt (Garrick Ollivander), Dave Legeno (Fenrir Greyback), Roger Lloyd-Pack (Barty Crouch Sr.), Robert Hardy (Cornelius Fudge), Richard Griffiths (Vernon Dursley), among others .

January 1 is a holiday that is regularly lived as a family and it is customary to continue with the previous festivities, with the famous “reheated”; therefore, few invest time in watching television series and streaming … but this year was different for fans of Harry Potter.

In the early hours of the day “Harry Potter: Return to Hogwarts” went viral on different social networks, as many woke up early to see the special and many others did not even sleep or interrupted their meetings to be the first to see the reunion of the actors and filmmakers of the saga.

Animated gifs, memes, images of the special and phrases of remembrance have filled Facebook, Twitter and even TikTok and, among them, the Mexican influencer most loved by fans, “Invisible Cloak”, could not be missing.

I love you so much special from Harry Potter, you are a nice New Year’s gift. #ReturnToHogwarts pic.twitter.com/FaerlnC07B

Haha I felt the same … 👵
It is one of the most beautiful things that Harry Potter has … it crosses generations … # HarryPotter20thAnniversary pic.twitter.com/0BItQ51qAr

I’ve only been 2min of Harry Potter, 20th anniversary and I’m already crying 🥺

The Harry Potter special is very emotional for those of us who carry this story in our hearts and I have found it a beautiful tribute to all those who contributed to bring this saga to life through the films. # HarryPotter20thAnniversary pic.twitter.com/Y35HYKe5G3

When I read the first Harry Potter book, I was 9 years old and I was part of the generation that waited for the books, that grew up with the characters, that lived through adolescence with the protagonists of the films and that identified and learned from history . (one) pic.twitter.com/9b9yYuI8Wx

In an event without a sorting hat, in addition to the golden trio, well-known characters such as Gary Oldman, who gave life to Sirius Black, or Helena Bonham Carter, the terrifying Bellatrix Lestrange, narrate their best and worst moments during the filming of Harry Potter.

Although many fans have waited years for Emma Watson and Tom Felton confirm an old romance, on or off the set, finally the interpreters of Hermione Granger and Draco Malfoy clarified the type of love they have … and dropped a bomb that not many believed.

The rumors between the two actors never stopped, so much so that the alleged relationship was baptized as Dramione.

And it all started when, in the first films, Emma looked every day for Tom’s shooting number, 7, to see if they would share scenes, because she was completely fond of him.

“The task we had been given was to draw what you thought God was like, and Tom had drawn a girl with a cap pulled back on a skateboard. And I don’t know how to say it: I fell in love with him ”, says the actress.

Despite this, it is also said that love was not reciprocated; however for a moment Watson clarifies that “never, never, never” nothing happened between them, but the smiles and looks that both actors share increased doubts among the fans, who consider that it is as false as the kiss that Emma and Rupert gave each other in the eighth film, because a couple of years ago a photo on Instagram of both in their pajamas and playing a guitar had raised hopes of seeing them together.

Adolescence for Emma Watson was so hard that she even thought about leaving Harry Potter on more than one occasion. The actress sadly recalls how her mood and the spotlights in her life made her feel lonely.

“I have re-read my diary… maybe sometimes I felt lonely. The fame thing came home in a big way “, narrates the young actress.

However, all his companions remember that time and even admit that it was something that was almost never discussed on set, as they were only children.

“People definitely forget what they took on and how gracefully they did it. Dan (Radcliffe) and Rupert (Grint) had each other. I had my cronies, while Emma was not only younger, she was alone, says Tom Felton, recalling that most were 11 years old when they entered the franchise, while Emma was 10 and more introverted.

The loneliness stayed for a while and, although they already had a brotherly friendship, for the filming of “Harry Potter and the Goblet of Fire” Emma Watson She had already made the decision to leave her role as Hermione Granger, but thankfully she gave up.

“The fans really wanted me to succeed and they genuinely supported us,” explains the woman, thanking the real potterheads.

Impossible loves from the set

It’s not a secret either, but the way these stories were told caused some fun for Harry Potter fans.

On the one hand, we remember the most difficult scene to shoot for Emma Watson and Rupert Grint: Ron and Hermione’s kiss in “Harry Potter and the Deathly Hallows Part 2”, where they put aside their brotherly love to fake an intense romance in one of the most anticipated scenes in all of history.

“It was supposed to be a dramatic kiss, but you and I lost focus, we couldn’t stop laughing and I was very afraid that it would never turn out well because we couldn’t take it seriously. Kissing Rupert was one of the hardest things I had to do“Revealed the famous 31-year-old.

Also impossible, but not false this time, Daniel Radcliffe confessed his infatuation with Helena Bonham Carter, to whom he even wrote a letter thanking him for having the opportunity to work with her and declaring his deep love, despite the fact that she is 23 years older than him.

“I love you and wish I was born 10 years earlier. He could have had a chance, I send you a lot of love and thank you for being great, “read the note that his co-star still has.

Tiktoker blackmails and humiliates the waiter during a live show; “They go to the jugular” in networks and returns to apologize

He insults his boss, threatens his colleague … and wins a lawsuit for wrongful termination!