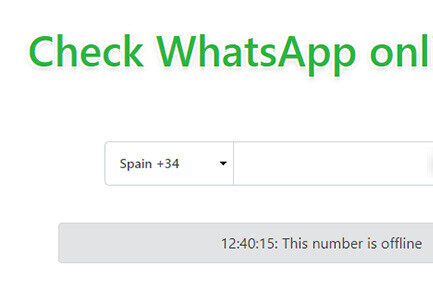 WhatsApp has been reinforcing its privacy options for a long time and we can, for example, decide who can see our profile photo or who can know what was the last time we were connected. But the data of whether we are online or not was public until now and anyone could consult it. They could spy on us with relative ease.

But WhatsApp has decided that it is now fine and has restricted access to this data, namely whether or not we are connected at that time, with which all the websites that promised to tell us whether a user was online or not have been loaded with one stroke. by entering your phone number. Nothing will change for our contacts with active conversations, be careful, this is just so strangers don’t spy on us.

No more spying from the shadows

As we said, anyone who has an active conversation with us, whether it is recently open or old, can easily see if we are online or not, because in the conversation itself we can clearly see the ‘online’ at the top. But that data was also public for those who had not interacted with us. That is to say, it was possible to spy on us from the shadows.

WhatsApp has taken measures against the latter and, as it has officially communicated, it is making checking whether we are online or not more difficult than ever in its application. It is a security and privacy measure for its users who prevents this data from being checked from outside the application or no active conversations. That is, either you talk to me or forget about knowing if I am talking to others or not.

Read:  The dinosaur widget comes to Google Chrome in its stable version: this is how you can install it

“To improve the privacy and security of our users, we are making it more difficult for people you do not know and with whom you have not chatted to see your last connection time and online connection status on WhatsApp. […] This will not change anything between you and your friends, family and businesses that you know and have exchanged messages with before. “

There is a whole ecosystem of web pages and applications that until now promised (and continue to promise until closing) to tell us if this or that contact was online. It was enough to enter their phone number and, by consulting this data that is now restricted, they would tell us if that user had the session and the app open at that time. All of that is over now.

As our colleagues at Engadget Mobile indicate, perhaps the most appropriate thing would have been to offer users a new setting that would allow them to decide which users could see our online status and which users could not, instead of such a radical cut. But the truth is that It is a piece of information that should have been more private for a long time and it already is. Better late than never.