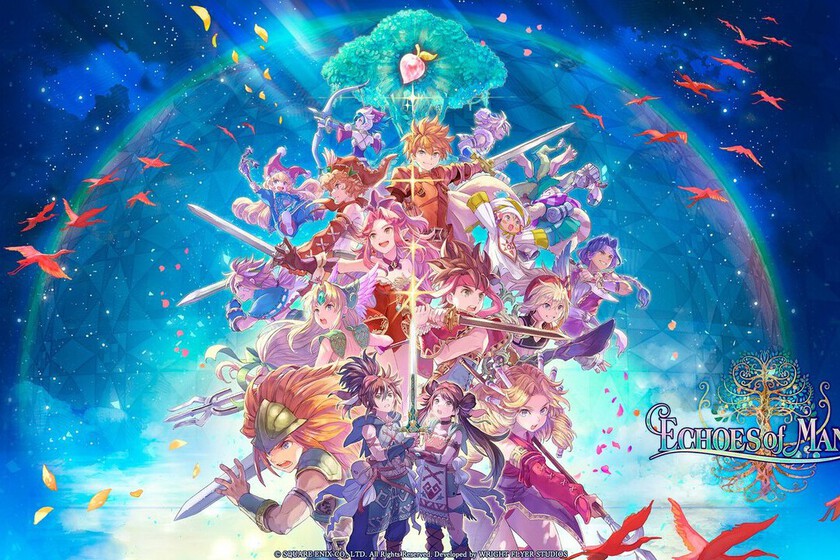 If you’re a fan of Japanese-style RPGs, you’re in luck: Echoes of Mana, the newest game in the acclaimed Mana series for mobile devices, is coming to iOS and Android next week. The adventure that will bring together all the heroes of the saga will be played next April 27. And nothing like an anime trailer to round off this announcement.

Echoes of Mana It was announced in the summer of 2021 along with Trials of Mana, although its departure has been much more expected. The premise: to offer a game that manages to connect with lifelong fans and new players through mobile devices. Which, translated into the gaming experience, implies house brand turn-based fighting on behalf of the best known faces of the franchise.

In fact, the heroes of each and every one of the previous installments are the true protagonists of the piece of animation created for the occasion. Almost two minutes that make it clear the master touch of the MADHOUSE studiowho have produced series such as One Punch-Man, Death Note or the Perfect Blue movie.

Regarding the game, Echoes of Mana It will offer a completely original story in which the characters of the saga will be guided by a powerful deity to find a sword that will be the key to save all forms of life. A premise as epic as it is diffuse, of course. Although, being fair, Seen in motion, the game already points ways.

And despite the fact that we will have to wait for the next one to undertake this adventure, it is worth remembering that the pre-game registrations are already open in the Apple Appstore and Android Google Play Store. Something to consider since when exceeding the mark million registered users 100 Summon Orbs will be given to all players.

Read:  Among Us trophy guide for PS4 and PS5

It may not be a new main installment, but it is clear that the saga continues to grow. And that, whichever way you look at it, is good. And the best thing is that no matter what your favorite Mana game is, its characters and enemies will be present in this new mobile RPG. An Echoes of Mana to which in just 5 days -counting from today- we will be able to lay down the glove.