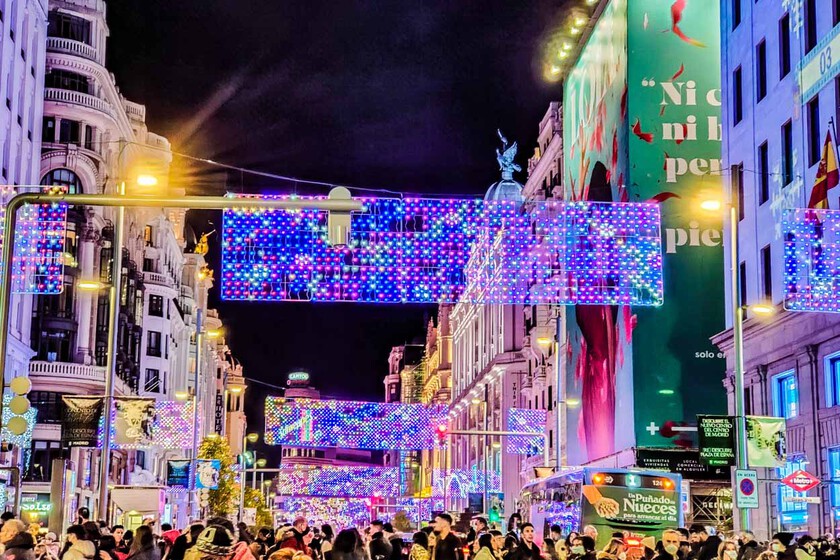 If there is something inherent to Christmas that raises passions (or blisters) every year in Spain, it is the Christmas lights. On certain dates, the streets of our country are filled with brightness, color and music to celebrate the holidays. However, for more than one, the bad taste of the municipalities does not go unnoticed. As the journalist Michael McLoughlin pointed out on Twitter, “The competition that has started in Spain for Christmas lighting has become the Horterism World Cup”. You are not wrong.

Málaga, which welcomed Christmas this Saturday with the switching on of the new lighting in Calle Larios, has been the subject of jokes for the 16 ‘Heavenly Angels’ (all the same, by the way). Four meters high, the figures, designed by Iluminaciones Ximénez, shine every day to the sound of music between 7:00 p.m. and 10:00 p.m. in a show that little or nothing has Christmas. If you told me that we are talking about Valencia in Fallas, I would believe you.

And be careful, because the decoration chosen this year by the City Council, apparently, is inspired by Regent Street, the famous street in the British capital that, since 2016, has been decorated in December with angels they call “The Spirit of Christmas”. They have been the same.

The competition that has started in Spain for Christmas lighting has become the Horterism World Cup. https://t.co/0ZJZMaK2NX

And wait, because the music that accompanies the show hosts songs by the Dominican Henry Méndez or even justmo by Chanel Terrero. Although there was no lack Sweet Caroline, a little Christmas is missed under that dizzying golden ceiling. And on the other hand, there are the crowds. Good luck if you lose a relative, a friend or your grandmother. You may lose the night to find him because the mobile coverage in the area is simply a utopia.

But let’s go back to the Christmas lighting that is so popular in Spain. Up to 111 million led lights cover the city of Vigo today in a great effort by its mayor, Abel Caballero, to bring another year the Christmas spirit to the streets of his city. As is well known, Vigo’s romance with Christmas lighting overcomes all barriers. And each year their desire for more and more is undeniable, generating a great media and economic impact, although some residents consider that all this spending is simply a waste of public money.

In total for this Christmas, the approved expense is 929,052 euros, which includes both decoration and light bulbs as well as their installation, maintenance and removal. And it is worth noting that in the same document that includes the contract its cost is justified due to the “broad repercussion at the national level”. Although when they speak of “national impact” it is not clear if they are referring to its hippie and mesmerizing giant Ferris wheel or its tacky lighting.

Read:  Shielding of works is to speed up construction, not to hide data: AMLO

And no, the Vigo Christmas party does not finish convincing its population. In fact, a multitude of neighborhood associations have denounced the noise they suffer and have started a patronage campaign to go to administrative proceedings against the City Council. They complain about the loudspeakers that surround the entire city and play Christmas carols non-stop. And of course, if you add to this the noise and shouting of thousands of people who come to see the lights, you have a big neighborhood problem, especially for those buildings that are close to the most touristic attractions.

Let’s go now to the capital. Madrid did the same. If the office already surprised us a couple of years ago with its most anticipated Christmas novelty: 27 “giant meninas” Y a ball that looks like something out of Back to the Futurethis year surprises us with lighting that can only be defined with one word: dry.

At least we have been luckier than the residents of Alicante, who woke up with this marvel lighting a few days ago:

while in #Alicante go on and on like batteries #Tudor controversial 😠 by absent, when not tacky, lighting #ChristmasThis is how the square and City Hall look #Xixona😀. Come on up and soak up the Christmas spirit 🎄 and repeat, if that, with #nougat freshly made🍯🍫
👉https://t.co/Hl1ahhKwBW pic.twitter.com/FAVurI4Waa

Or those of Palma, where Christmas-Aquarium has arrived.

And in this who do we copy? Please, can it be more seedy? Those bows in the trees, the goldfish… Incredible, if the center is already sad with so many closed premises, raised tiles… The icing on the seedy Christmas fish-lights was missing pic.twitter.com/WiFQglJByQ

Although La Rioja takes the cake:

In La Rioja we congratulate the holidays in elfico 😂😂
(They are the lights of Ausejo) pic.twitter.com/DSDsHNAqsV

The Christmas lights of Ausejo, a town in La Rioja, have gone viral on social networks after the publication of a video showing lighting that is literally unreadable. What was intended to be the phrase “Merry Christmas” has been blurred by having some blown light bulbs and has given rise to hundreds of jokes and memes.

As long as we don’t get to this point, everything will be fine.

Our village Christmas lights are designed by the local primary kids and they are the single best thing about the festive season. pic.twitter.com/kDhfLk3Dcb