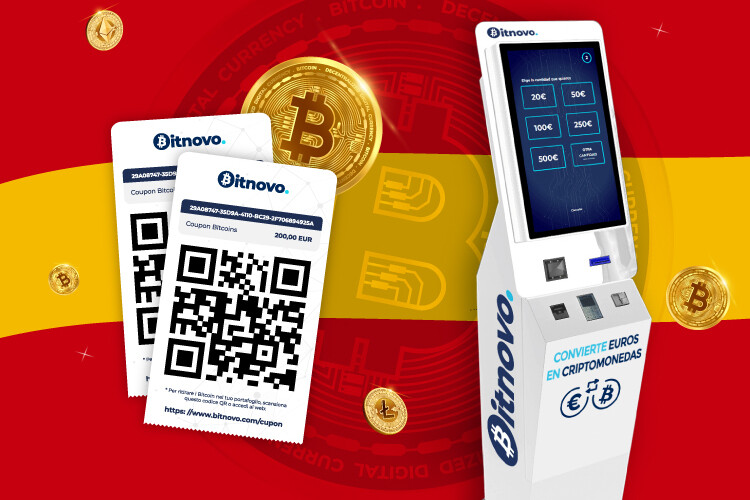 Bitnovo and Eurocoin have signed an agreement to install more than 100 cryptocurrency ATMs in Spain. This will make Spain the country in Europe with the most ATMs. According to Bitnovo our country will be the third country in the world in the supply of ATMs for cryptocurrencies.

These ATMs allow operations in cash and without the need to resort to transfers or use cards. According to current data from Coin ATM Radar, Spain will be the third country in the world with the largest number of crypto ATMs in the world, only behind the United States and Canada.

A great interest in cryptocurrencies in Spain


For these companies, Spain is “one of the countries where interest in cryptocurrencies reaches surprising magnitudes and according to the latest Statista Global Consumer survey, ## is the second country in Europe in the number of people who claim to use or possess cryptocurrencies.”

With these novelties, people will be able to get currencies like Bitcoin (BTC), Ethereum (ETH), Monero (XMR), Tether (USDT), among others. “Cryptocurrency ATMs, also called crypto ATMs, allow anyone to have access to Bitcoin and the main cryptocurrencies,” according to Bitnovo officials.

According to the CEO of Eurocoin Spain, Fernando Dumont: “this is a strategic move by the company to expand our niche market from traditional and digital payment systems to blockchain and cryptocurrency ecosystems. We believe that the future of payments in all its forms will coexist with the crypto universe in the short term. ”

Read:  The price of the POCO X3 Pro collapses in this Ebay offer, which leaves it at 179 euros for the first time | Technology

A study by Eurocoin Pay states that “a vast majority of (Spanish) investors, specifically 82.1%, they look at the price of cryptocurrencies at least once a day, and 54.6% of them look at it several times a day, which shows the great interest of this sector among Spanish investors ”.