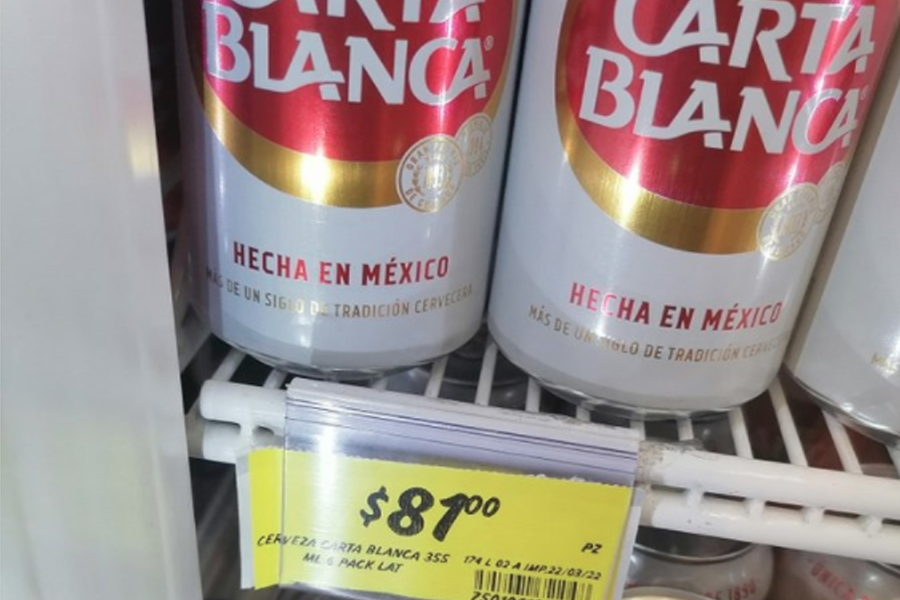 A consumer claims Soriana for selling six of Carta Blanca in 81 pesos when, according to what it expresses, in other places it is cheaper.

Whether due to consumer preference or simple convenience, the truth is that Soriana is currently one of the most popular stores and one of the fastest growing in recent years.

According to information from Statistical, the Mexican supermarket chain Soriana Organization was the second supermarket chain with the largest number of stores in Mexico among industry leaders in 2019, trailing only Walmart. Of a total of 810 stores operated by the organization, 380 were Soriana Híper, the format with the largest commercial space.

Despite the fact that these are times in which there has been an increase in digital shopping experiences, for a few months, it has become clear that the consumer is still looking for personal treatment in stores, a traditional shopping model that has prevailed for years.

That is why, today, we continue to see department and self-service stores with a great agglomeration, checkouts with long lines of consumers, making it clear that the face-to-face experience continues to be the main trend.

Nevertheless, the complaints of the consumers themselves have not ceased to be part of the different shopping experiences and in these times of an important boom in social networks, the claims are increasingly notorious.

Six of Carta Blanca at 81 pesos in Soriana; consumer claims

To mention an example, a Soriana consumer communicated with the brand through his Twitter account, where he expressed his disagreement with the fact that a six of Carta Blanca beer is priced at 81 pesos, since, according to what expresses, this costs much less in “other places”.

Hahaha now they sucked @TiendaSoriana. In any other place it does not exceed 45, they are quite idiots, haha. pic.twitter.com/V8SdG70cwe

One of the reasons why the consumer chooses a store or a particular brand is the prices; It is well known that, in general, consumers are looking for lower prices, and that is the main claim of the user.

Read:  The Latino group that hacked Nvidia claims to have hacked Microsoft

According to what @RafaCannavaro expresses, the price of the Carta Blanca six does not exceed 45 pesos in other stores, fact that gives rise to think that, in Soriana, the same product is sold for almost twice as much.

However, in times of economic reactivation, supermarkets are of vital importance, above all, for a considerable part of the population, which offer a much more personal shopping experience, where customers can move between long aisles and choose between a wide variety of products for your convenience, whether in terms of food, beauty products and household items, among many others.

Nowadays there is a wide variety of this type of stores, giving the consumer the difficult situation of choosing between one brand and another, where the offers are, in general, the hook to buy their products.

An example of the latter can be seen when, in Bodega Aurrerá, an offer of 8 pesos a beer was launchedwhich is why one of your customers wanted to make a massive purchase of said product.

Wanting to quench his “thirst”, the store customer decided to take more than 10 units, which is why, when he wanted to pay, he was met with a refusal by the employees of Bodega Aurrerá, who argued that he could only take 10 bottles and not all the ones you put in your cart.