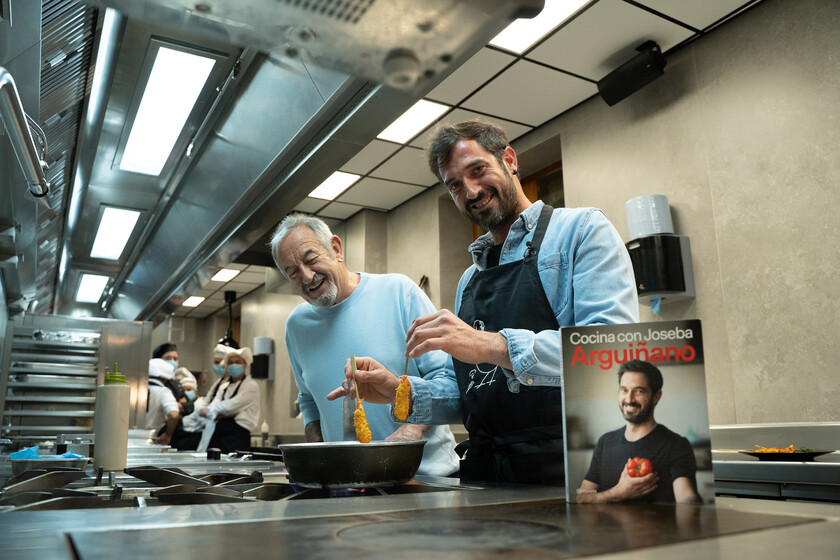 The greyhound comes from caste, we could say Joseba Arguinano (Zarautz, 1985), the youngest of the seven children of Karlos Arguiñano and the one who, curiously, is following in his footsteps the most. Although youthful temptation led him, as he says, “because of the engine, the noise and the motorcycles”, he ended up parking a dream on two wheels to follow part of the family footsteps.

First studying at the Aiala cooking school and then entering the family restaurant, where he held all kinds of items, until replacing her aunt Eva in charge of the pastry shop and bakery. From there he created his own workshop (JA, in Zarautz itself) and, meanwhile, made his debut on Basque television with a cooking program (Joseba Arguiñano Sukalerrian and Escapadas con Joseba). He now releases a cookbook Cooking with Joseba Arguiñano (Kitchen Planet) and, under a paternal influence, we could say that history repeats itself.

However, Joseba Arguiñano does not tell jokes —luckily or unfortunately—, but he shares a character with his father that endorses a devotion to traditional cuisinefor the family, for saying what he thinks and, above all, for keeping his feet on the ground.

Being an Arguiñano were you predetermined to end up in the kitchen?

It could not be said that it has come unintentionally because I was born in a kitchen, some stoves and we have always been linked to the restaurant. When I was 14 years old, like almost everyone, I wanted to be a motorcyclist, an artist or a firefighter, but then I passed it and after ESO I studied cooking, I was good at it and I ended up heading for it.

You’re a millennial or almost, the limit is never clear, do you think that the new generations cook less?

Every time there is a more industrial kitchen and yes, I think that less and less is cooked. There are no stews, broths or stocks, everything that takes time in the kitchen is made less and it’s a shame. When you make stews, legumes, broths and take the tripe, it’s not so much work. In the end it is to put on and you learn almost without wanting to.

What kind of people is your recipe book dedicated to?

It is a book for people who enjoy or who want to give a special touch to recipes. Traditional cooking is always the base, but I didn’t want to just make lentils or beans. It is more to look for a touch on special days or when you have guests at home. It is a book for little cooks who do not know what to do when someone comes home or who has to receive the in-laws.

Your father has written more than one cookbook. Has he given you a hand with him?

No, I have been making them myself because I was already writing my recipes when I started on TV, only I have been adapting the quantities so that they are recipes for four or six people. In the end you have been on TV for so long, you have done so many and in the end you realize that it is a format that was suitable for a book. There are things with little touches that I like, like making a different guacamole, a ramen or some pakoras.

For many years you have been making sweet cuisine, how has it been to return to savory cuisine?

The truth is that when I studied cooking I only made salty. Then came the practices in Akelarre and Kirkilla and then the home restaurant in all the games. when the aunt [Eva Arguiñano] he was going to leave the restaurant to go to school, he taught me all his art and I kept that game, but I never lost the link with salty.

Is it dizzying to get into a cooking show on ETB, even more so when chefs like Ander González, David de Jorge or your father have been there?

More than vertigo is respect, but I have always been throw up palante. I am there to learn from them and I have a lot of relationship with all of them, they help me, they make me feel good and it is an honor to have them as references and friends.

Is it difficult to be the son of Arguiñano or have you ever noticed a differential treatment for being ‘the son of’?

It doesn’t matter because in the end I have always been Arguiñano’s son and he is who he is, what he has been and what he will be. He is the most popular chef in Spain and I have always taken advantage of those doors that we had open.

Read:  Ubisoft would have four other games in development still unannounced

Even though someone says it can be a plug?

There is always a plug, but then you cook it and you eat it. People tell me that I have taken advantage, but how could I not take advantage of the good things and the open doors.

Doors open, but then you have to keep them open…

You are seven brothers and many times your father was away. In Mexico, in Argentina, in Madrid… How did you deal with his absence at home?

Do you think you would have been a cook if your father hadn’t been?

It would be difficult to have been a cook without the aita as a cook. I really liked the motor, the noise, the motorcycles… In fact, my father told me “if you were Catalan, you would be a motorcyclist”, but here it rains so much and we don’t have many circuits, so I think that the environment where you live make be as you are

Are you one to tell jokes?

No no, I’ll leave that to daddy, although sometimes he tells the same joke three or four times and you don’t laugh as much anymore [se ríe al otro lado del teléfono].

Did you ask him for advice when you entered TV?

He told me very clearly: “be yourself and drive miles because otherwise you have to spend your whole life doing the paripé”. I am quite wild and natural, I think that with that I have reached people, always saying what I think.

The fish also dies through the mouth…

The one who speaks sometimes messes up. He can’t always be talking without screwing up. That it never rains to everyone’s liking. I try not to hurt anyone with what I say, but always being honest.

Do you think there are things your father said 30 years ago that he couldn’t say now?

People are more sensitive now and luckily [vuelve a reír]. In the end you have to adapt to the times and you see that some dirty joke or things like that are less and less funny. In any case, I think that black humor also exists and that in the end we make humor out of our shortcomings, like jokes about Basques or chefs.

Joseba Arguiñano, in addition to having a cooking program on ETB, also maintains his workshop JA (in Zarauz) and enjoys skateboarding as a hobby. ©Ruben Blyth.

Returning to the kitchen, what dishes does your father embroider at home?

It is the king of soups, whether garlic or fish. At home we have always been a spoon and soup at the table, and he is also good at baked fish.

A chef you admire—other than your father—?

Hilario Arbelaitz convinces me [del estrella Michelin Zuberoa, en Oiartzun, también Guipúzcoa]. For me he is number one among Basque chefs. It is the authentic Basque cuisine with its special and wonderful touches, but always without stepping on tradition.

Do you think part of the traditional cuisine has been lost?

Yes, and it is a brutality that goes up. I think that more cooking should be done like Hilario and less spherifications and so many stories. Give the special touch to the dishes, but with the basis of a traditional cuisine with product. Of course you have to surprise, but you also have to eat to feed yourself and to enjoy. There are places where you can’t be eating like this every weekend. Maybe one day a year or once in a lifetime, but we all want some good baby squid, a good shellfish or a good soup.

Apart from Zuberoa, where do you like to eat when you lose weight?

I go to produce restaurants when I go out, like Getaria, to places like Kaia, which have a shellfish farm below the restaurant, the freshly caught fish or the red mullet that the fisherman has just brought.

In DAP | Karlos Arguiñano turns 70: this is the story of the most beloved chef in Spain
In DAP | David de Jorge: “From time to time I let out the fat man inside me, but I try to tame him in the best possible way”