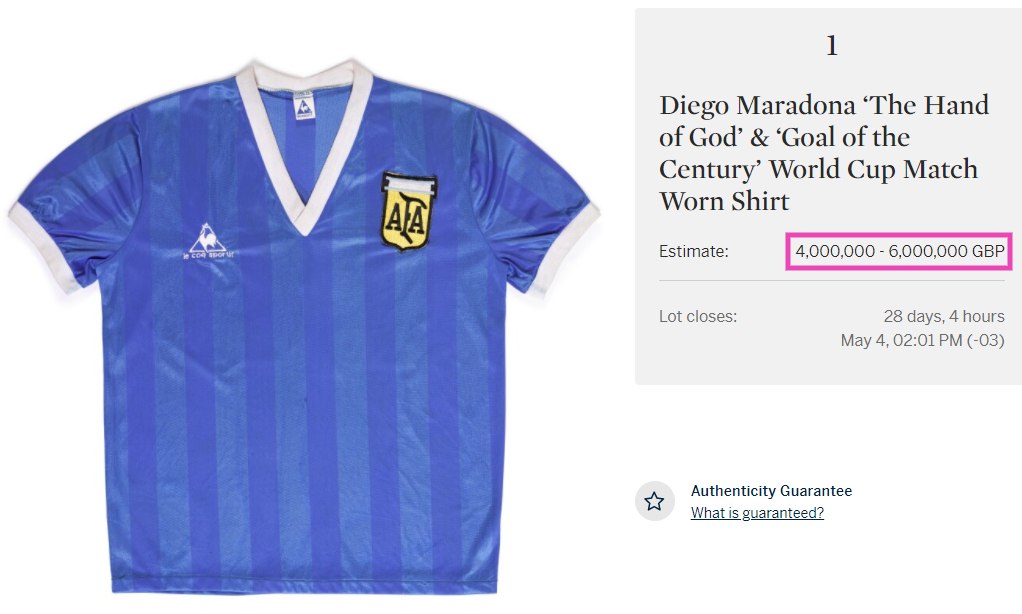 The Le Coq Sportif brand shirt with which Diego Maradona converted what was later cataloged as “the best goal of the 20th century” will change hands.

It will be when the auction that has already started ends and for which they hope to obtain about 7 million dollars.

With that shirt, blue and with the number 10, he also starred in the other goal in that same game: the one that the ill-fated Argentine star also scored with his hand (“The hand of God”, they said later).

Its owner is an English soccer player who was present at the Azteca in that game that ended 2-1 in favor of the Argentine National Team, which weeks later was world champion.

The shirt with which Diego Maradona made “The Hand of God” and “The Goal of the Century” against England in the 1986 World Cup is on sale for the first time in history. The idea is to raise between 4 and 6 million pounds sterling, something like US$7 million if it is sold for the highest amount expected.

Who owns the Le Coq Sportif shirt that Maradona wore?

The shirt belongs to former English footballer Steve Hodge and since 2003 it has been exhibited in the Manchester Museum as one of the main attractions.

A year and a half ago, when Maradona died, Hodge said that he was not going to sell it in those days, taking advantage of the worldwide interest in the objects that belonged to the former player.

However, over time, he understands that the time has come.

Read:  Inflation in Mexico refuses to yield in April

The auction is already started on the website of Sotheby’s, a specialist in luxury items.

Hodge told how he got Maradona’s shirt

After the defeat against Argentina in the quarterfinals of the FIFA Mexico 86 Cup, the midfielder directly asked Maradona for the shirt.

“I thought, I’m not going to be here again, I’m going to try to get some jersey. I shook hands with Maradona, but he was surrounded by his teammates, so I thought: ‘It doesn’t make sense’”.

According to Hodge, on the way to the Azteca locker room, he ran into Diego Maradona again. “While he was going down, Diego was walking with two other players from Argentina. I looked into his eyes, tugged at my shirt as if to say ‘Is there any chance of swapping them?’ Maradona approached me and said yes, ”he detailed.

According to Sotheby’s published on the web, before putting it up for auction they worked with Resolution Photomatching to analyze if it is really the shirt with which Maradona played in Mexico against England.

Using a special process, various elements of the product were analyzed, including the crest patch, stripes and numbering.

The result: Maradona played with one shirt the first half and with another the second. And it was with this last one that he converted the two historical goals, the same one that is for sale now.