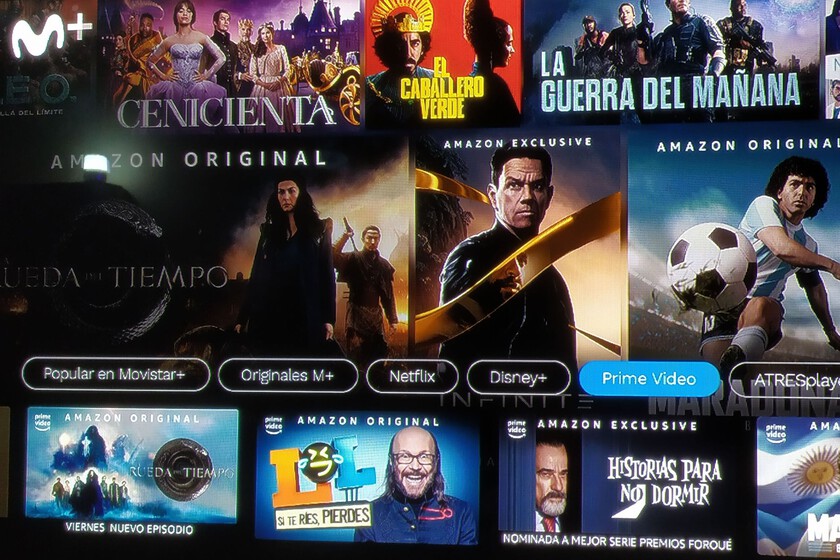 Some days ago Movistar and Amazon announced that the streaming video service Amazon Prime Video would reach Movistar + customers in the form of a own application for UHD (4K) decoders of the operator.

In this way, the Amazon service would thus cover its direct access from the three major Internet operators in Spain after the previous arrival on the Vodafone TV and Orange TV platforms.

The Prime Video integration process in Movistar + has been carried out in the last seven days and right now should already be available for the vast majority of clients with a UHD decoder installed at home, both at the level of direct access from the app and from the aggregation of content on the Movistar platform at the same level as those of Netflix, Disney + and DAZN.

Index hide
1 How to access Amazon Prime Video from Movistar +
2 Integrated content and an interface that complies, although it can improve

In order to access the Amazon Prime Video content from Movistar + we must first be subscribed to the service, currently not counting on any promotion or special “launch” offer for Movistar customers, so the price is maintained at 36 euros per year or 3.99 euros per month.

We can also contract Amazon Prime to enjoy free fast shipping, priority accessory to offers, services such as Prime Music and unlimited photo storage and thus we will have 30 day free trial from Prime Video (after that it will cost those 36 euros per year).

Once we are already Prime Video customers we can access the platform directly dialing dial 102 on the Movistar + decoder control, pressing “OK” and identifying ourselves with our service credentials. It should be noted that, if we do not have an account, still we can enter the application to navigate and take a look for the content offered (something that for example is not possible with Netflix or Disney +), see how the interface works, what configuration options there are, etc. Everything except logically see the contents.

Read:  Spotify introduces the "Expand" function that allows you to add up to 30 songs to the lists in the form of suggestions

The Prime Video catalog includes the original “Cinderella” movies and “The war of tomorrow”, Spanish programs such as “Stories to not sleep”, “GEO Beyond the limit”, “LOL: If you laugh, you lose”, “The Legend of Sergio Ramos”, “El Cid” (T2), and “El internado: Las cumbres “(T1), in addition to exclusive Amazon sports productions such as” Maradona: blessed dream “,” Rafa Nadal Academy “,” Another way of understanding life “or” Fernando Torres: the last symbol “, renowned series such as “The Marvelous Mrs. Maisel”, “Fleabag”, the Emmy nominees “The Boys” and “The Underground Railroad” and the long-awaited premiere of “The wheel of time”.

Integrated content and an interface that complies, although it can improve

In addition, as is already the case for example with Netflix, the contents will be accessible individually in the general menu of the decoder, in the searches we do And in the personalized recommendations that appear to us, which will allow us to access them more easily and quickly in some cases.

As for the user interface, from what I have been able to test in the last two days, in general it is fast, clean, fluid and works well, although in some specific moments I have been somewhat “pensive” with certain delays that I do not know very well what they are due to.

Presumably with later versions of the app these minor inconveniences are resolved and we have access at least as effective as the one already offered for Netflix.

the best way to prevent it from sticking or getting dry