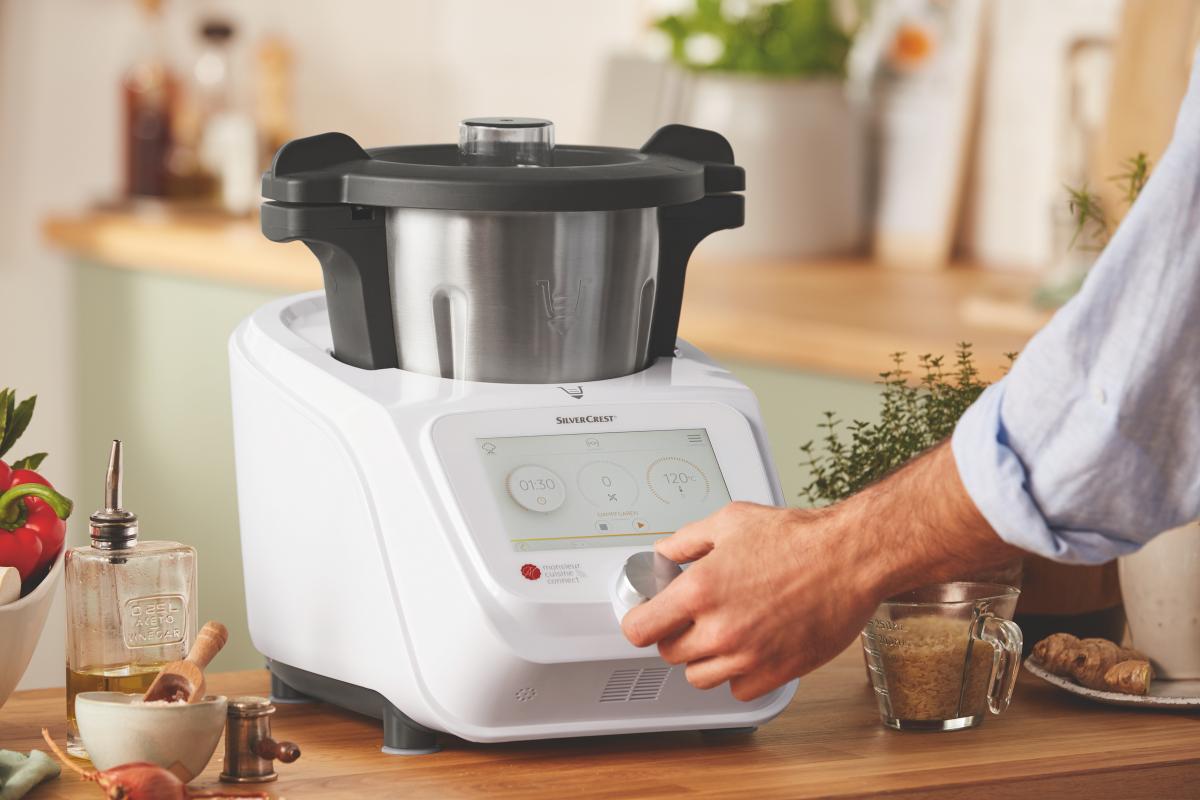 It never fails: every time the Lidl food processor is put on sale, it sells out with astonishing speed. The last time the German supermarket chain announced its availability was earlier this summer. It first went on sale through the official website, and in just three days the 40,000 units that Lidl allocated to this channel were sold out. A few days later, SilverCrest’s Monsieur Cuisine Connect reached physical stores, where the nearly 30,000 available units also lasted a very short time.

But what is so special about this appliance? The Lidl kitchen robot (there are actually two models: a basic one that costs 199 euros and an advanced one that costs 359 euros) became famous because of its good value for money. Compared with the models of other brands, it offers similar benefits and costs considerably cheaper. In fact, many people consider that It is one of the best cheap alternatives to the Thermomix.

The food processor is not Lidl’s only successful appliance. SilverCrest is the white label of the German chain dedicated to household appliances, and in recent times many of the devices with this seal have become a success of sales.

Among them are the bakery that caused such a sensation during confinement, the ironing mannequin that has triumphed in recent weeks, the 9-in-1 oil-free fryer, the portable air conditioner, the vertical ironing center or the electric window cleaner. And these are just a few examples: SilverCrest’s catalog of appliances is extremely extensive and many appliances hang the Out of Stock sign on the web and in physical stores when they go on sale.

If you know about SilverCrest devices and you have any of them at home, surely you have ever wondered who manufactures Lidl appliances, what is the secret of their success and how is it possible that they have such an attractive value for money. You have come to the right place: in this report we are going to try to solve all these doubts and clarify where the home appliances that are causing such a sensation come from.

The secrets of Lidl appliances

Index hide
1 1. The ingredients for a great sales success
2 2. The opacity of Lidl
3 3. The companies behind Lidl appliances
4 4. The scandal that uncovered the origin of Monsieur Cuisine Connect
5 5. Vegan Milker by ChufaMix plagiarism points to manufacturing in China

1. The ingredients for a great sales success

Before starting to inquire into the provenance of SilverCrest appliances, first of all we are going to stop and analyze what are the ingredients of your best-seller. Today, thanks to platforms such as Amazon, eBay or AliExpress, we have at our disposal an immense catalog with products of all kinds and very competitive prices. So why do Lidl appliances sell so well?

One of the points to keep in mind is that, unlike eCommerce platforms, Lidl has physical establishments to which consumers go to make the purchase of food products. The company’s marketing strategies are responsible for taking advantage of this opportunity to ensure that its customers, in addition to buying food, also take their white-label appliances, as well as other of the many items from its bazaar.

We analyze Monsieur Cuisine Connect, the most sought after Thermomix alternative kitchen robot. Worth? This is our opinion of the Lidl food processor.

These marketing strategies consist, on the one hand, in a very aggressive pricing policy. Compared to equivalent models from other brands, SilverCrest home appliances and electronics cost very little, and in many cases it is not even possible to find an equivalent product at a lower price on Amazon.

On the other hand, the sensation of scarcity of the products is another of the ingredients that encourage users to make the purchase. SilverCrest appliances are not available on a continuous basis, but can only be purchased on certain days of the campaign. Customers have the feeling that the items can be finished at any time, and they buy them thinking that it is a great opportunity that they cannot pass up.

Today, the online sale of the bazaar’s products also has a lot of weight, and a good part of the sales of household appliances are made through this channel. In fact, without going any further, in the last campaign of the kitchen robot Lidl allocated 10,000 more units to the online store than to physical establishments.

To this we must add that, in addition, Lidl appliances have made a name for themselves with consumers. As we said in the introduction, for example the kitchen robot is considered one of the cheap alternatives to the most recommended Thermomix, and in general SilverCrest devices get good ratings from users.

2. The opacity of Lidl

Based on the great success achieved, More and more users are wondering who makes Lidl appliances under its SilverCrest white label. But finding out this information is not easy at all due to the opacity of the corporation.

Each company has its own values ​​and philosophy. While there are companies that are committed to transparency in all aspects of their business, there are others that are more reserved and prefer to disclose as little information as possible.

We can find examples of these two extremes in Mercadona and Lidl. While the Valencian supermarket chain details who are the suppliers of its white label products, the German one does the opposite, so Knowing who are the companies that supply these items is in many cases an impossible mission. Due to this secrecy, knowing who makes SilverCrest appliances is no easy task.

3. The companies behind Lidl appliances

Many consumers think that, since it is a private label of the German chain, Lidl’s appliances are manufactured in Germany, but the corporation neither confirms nor denies this in any of its official communications. The only thing that makes it clear is that SilverCrest is its own brand of appliances.

Kompernass, a German company that deals with electronic products of various kinds (including household appliances) is one of the companies behind SilverCrest appliances. In fact, in their website It sells accessories, spare parts and even some complete products from this Lidl white label.

Lidl has put on sale in its online store a cheap ironing mannequin that dries and irons upper garments for you, such as shirts, blouses or T-shirts.

Another of the companies behind SilverCrest appliances is Hoyer handel, In whose Online store It is also possible to find parts, spare parts and accessories for the brand’s appliances.

4. The scandal that uncovered the origin of Monsieur Cuisine Connect

But the fact that at least two German companies are behind Lidl appliances, this does not mean that the appliances are made in Germany.

The demolition price of the products in the SilverCrest catalog makes us suspect that the manufacturing takes place in China. Hoyer Handel has two purchasing offices in the Asian country, one in Hong Kong and now in Shenzhen, and Kompernass also has operations in China.

But, as we said before, Lidl is a very opaque corporation, so Nothing is clear or its business network if the origin of many of the products of its wide range of private labels.

Nevertheless, the Lidl kitchen robot scandal that took place in June 2019 shed some light on where SilverCrest appliances are made. If you don’t remember the event, what happened was that two French users completely disassembled the appliance and discovered a hidden microphone inside their Monsieur Cuisine Connect.

This microphone is inactive but is fully functional and can be activated. In the official specifications of the Lidl kitchen robot, this component does not appear, which set off all the alarms among users. And, since the Monsieur Cuisine Connect has internet connectivity, this microphone can be hacked to spy on consumers, putting security and privacy at serious risk.

Lidl muddled through explaining that the kitchen robot is equipped with an internal microphone and speaker because the developers hoped to offer support for voice control with Alexa. Eventually this feature was not included, but it was too late to remove the component and the company decided to make it inactive.

Can we already classify the kitchen robot as one of the best inventions of humanity in recent decades? In this buying guide you will know the best models.

This scandal caused the international press to set their eyes on Lidl, and it came to light that the Monsieur Cuisine Connect is produced in China.. Therefore, it is likely that many other SilverCrest appliances (if not all) will also be made in the Asian country.

5. Vegan Milker by ChufaMix plagiarism points to manufacturing in China

Another scandal Lidl has recently been embroiled in is the plagiarism of Vegan Milker by Chufamix, an appliance patented by a Valencian company. Andoni Monforte, inventor of the device, has taken the German chain to court for launching a copy of his device, which is his own patented invention. German justice has agreed with Monforte, while the trial in Spain is still pending.

The Vegan Milker by Chufamix is ​​a device that allows you to prepare vegetable drinks from seeds. While the original can be purchased on Amazon from 35 euros, the copy of Lidl, marketed under the white brand Ernesto, was sold in Spain for only 9 euros.

Such as stand out Chufamix on his blog, among the reasons for this huge price difference is the fact that the Lidl appliance “It is manufactured by a German company owned by Lidl in China “. Therefore, we are facing further proof that Lidl’s private label appliances are produced in the Asian country.

Qatar 2022: this is the technology with which they cool the stadiums in the middle of the desert

NASA sent a tablet with advanced technology on the Artemis I mission: What do you want to prove with the device?

This is the incredible technology behind the Netflix series ‘1899’