Shows personality in the INE and users indicate risk 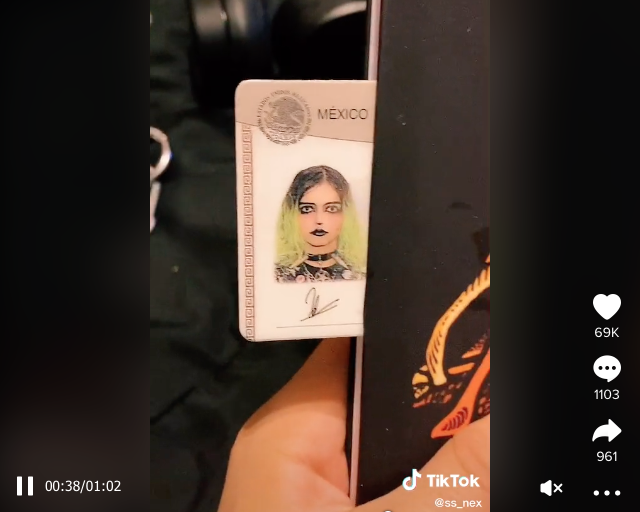 The identity of a person in an official document is very important throughout the world, since it allows us to enter schools, access basic health services and social security, among other things, from our childhood. Recently, an Internet user showed how he showed up to get his INE, where his appearance reveals his taste for punkgetting to appear in the official image with strong makeup and accessories and causing criticism before the digital pulse, where “free expression” was pointed out as a risk to his identity.

When we carry out any type of procedure in the world, it is common that among the requirements is to present some official identification, this in order to verify that our data and image agree with what is stipulated in said document.

In Mexico, the official document in force throughout the country and for any procedure is the Elector’s Credential, issued by the National Electoral Institute (INE); however, other documents such as passport, professional ID, national military service card, consular registration certificate, unique military identity card, driver’s license, credentials issued by federal, state and municipal authorities or proof of identity issued by municipal authorities , are also official IDs.

According to the page of the National Electoral Institute (INE), “The recognition of identity is a human right, which is associated with a set of rights, that is, for a person to be able to fully enjoy their civil, political, economic, social and cultural rights, it is fundamental and It is essential that their right to identity be guaranteed.”

Likewise, 92 million 805 thousand 424 Mexicans have this official document to vote.

Shows personality at the INE

In all countries of the world there are different rules to request an official document and one of them is the appearance or clothing you wear in the photo. Many times it is normal that they send you to remove accessories such as hats, earrings or necklaces, which can attract people’s attention or distort your image in the document.

However, free expression has reduced this, as demonstrated by a young man who went to the INE and asked to be allowed to appear on his identification with various studs, very pronounced makeup on his eyes and mouth, and a nose piercing.

“They shouldn’t tell me anything because of the right to free expression of personality, so they can’t force me to go a certain way in the INE photo,” says the young netizen in his recording.

The right to free development of personality is the faculty that each individual has to autonomously choose their way of living. This right guarantees subjects full independence to choose, for example, their profession, marital status, hobbies, physical appearance, studies or work activity and is only limited by respect for others and the general interest. Through this prerogative, the State recognizes the power of every person to choose to be and act in the way that best suits them to fulfill their particular preferences, goals and life expectations.

Read:  "it is a risk for the climate transition"

This right is enshrined in the Universal Declaration of Human Rights, in its articles 1, 22 and 26, which address, respectively, equality and human freedom; the satisfaction of economic, social and cultural rights; and education as a way to develop the human personality. However, it is not expressly regulated in the Mexican Constitution, which has not been an obstacle to its recognition in various resolutions issued by the Supreme Court of Justice of the Nation (SCJN).

The tiktoker, who identifies himself on the platform with the user @ss_nex, He details that in the INE module they did not tell him anything and if they allowed him to take his photo as he was dressed.

His recording went viral on social networks where he records more than 60 thousand interactions and various comments, where people criticize him, since with the appearance in which he appeared in the iNE it seems that he was in disguise and it would be easier for other people to impersonate him, stealing his identity.

“I don’t know about you, but I agree that your face has to come out without any accessories or makeup, to recognize your face,” says one of the comments.

“The problem is that if people who are not very good take advantage of this right in case of stealing your INE, they could use it as identity theft,” says another comment.

In that sense, although it is an act of freedom of expression for people who want to show themselves as they are, it can also be a risk to their identity in a world where more and more complaints of identity theft are registered.

INE responds to infiltration of electoral data; they would be from 2018, not 2021

INEC: The weight of citizen consultations and the centralization of the electoral body

AMLO launches electoral reform; plans to replace the INE with the INEC