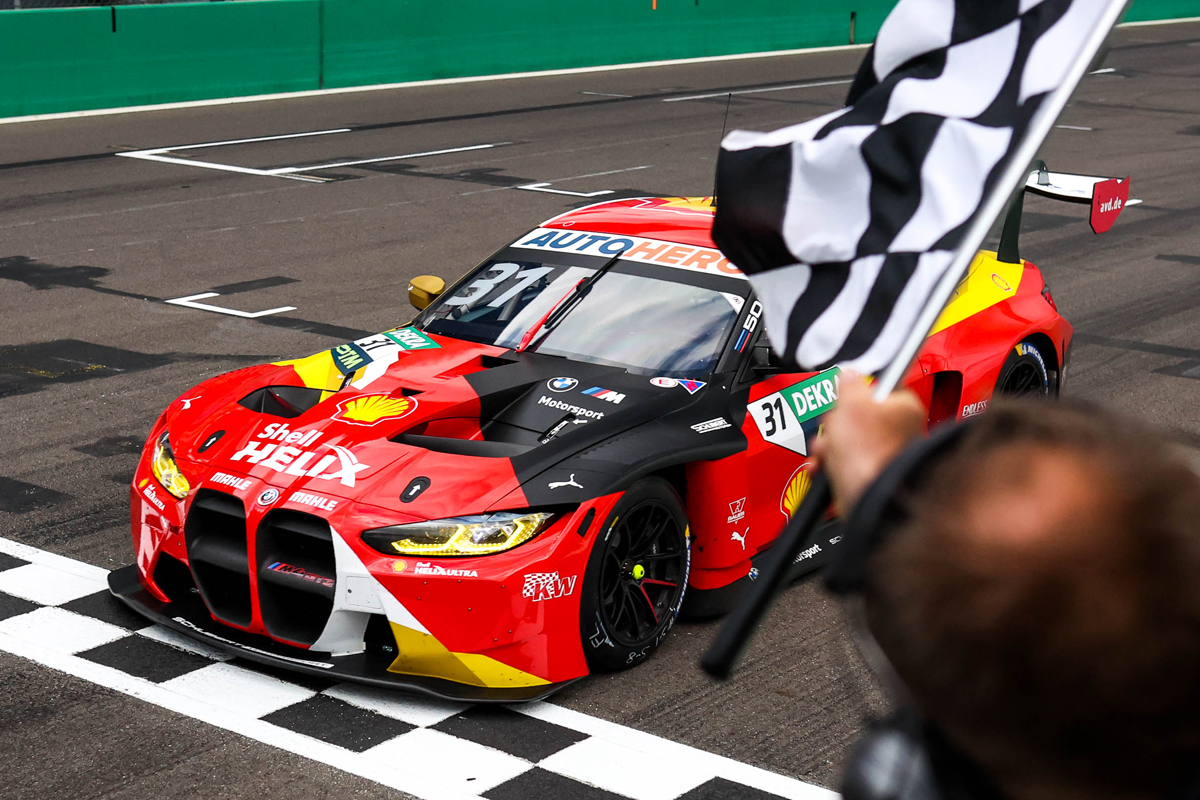 The South African Sheldon Van der Linde has not only achieved the first victory and the first pole of the BMW M4 GT3 in the DTM, but has also signed the first double victory of the GT3 of the firm from Munich. With an undeniable performance, Van der Linde wins Sunday’s DTM race at the Lausitzring to seal a magnificent double with the car managed by Schubert Motorsport. Podium for Maro Engel and René Rast in a slightly flatter race than usual. Sheldon Van der Linde is positioned as the new leader of the DTM.

Sheldon Van der Linde signed a good start to maintain the lead ahead of a Maro Engel who provisionally placed second. However, the Mercedes driver was pushed by Mirko Bortolotti at turn 2, causing him to go into the gravel. On his return to the track, Engel stopped Bortolotti in a notable way, allowing René Rast to sneak between them after a discreet start. Ricardo Feller was fifth, followed by Nico Müller and Philipp Eng. With these positions, the seventh lap was reached, also with the casualties of Thomas Preining and Mikäel Grenier.

At that moment, the first stops were made. Ricardo Feller, Philipp Eng, Lucas Auer and Luca Stolz were the first to pass through the pitlane. Eng was gaining position over Feller in the pits, despite the Swiss’s attempts to get ahead. They responded to the next turn Maro Engel, Nick Cassidy or Laurens Vanthoorbut we still had to wait a couple more laps to see the change of tires on the leader’s cars Shelvon Van der Linde, René Rast and Mirko Bortolotti. And the latter was the big loser, since he lost the position with Philipp Eng, finishing fifth in the virtual classification.

In fact, a couple of laps later Nico Müller was also winning the game against Mirko Bortolotti after stretching his stint. The Swiss was even ahead of Philipp Eng, but on cold tires he could only keep Bortolotti behind his Audi. Thus, the halfway point of the race was reached, still with Kelvin Van der Linde, Esteban Muth and Maximilian Götz with their stop to make. Behind, the duel between Ricardo Feller, Laurens Vanthoor and Marco Wittmann for eleventh place gave some color to the race.

Read:  Today you can get the Clarins Double Serum at a better price in Primor

The grid was tidy after the last stops 14 minutes from the end, with Maro Engel placing less than a second behind Sheldon Van der Linde. However, the Mercedes driver was not close enough to the leader to threaten his position and the last minutes of the race were spent between the problems that affected several GT3, including Nick Cassidy’s Ferrari. Only on the last lap did Engel appear to be a real threat to Van der Linde and his BMW M4 GT3.

However, there was no room for change. Sheldon Van der Linde closed his great weekend with his second victory at the Lausitzring ahead of Maro Engel. Three-time champion René Rast completed the podium, while Philipp Eng and Nico Müller were in charge of closing the ‘top 5’. Mirko Bortolotti stayed with the desire to sneak into the top five, but his attacks had no effect and he had to settle for the same sixth place achieved in yesterday’s race after finishing ahead of Ricardo Feller, Lucas Auer, Laurens Vanthooor and Marco Wittmann.