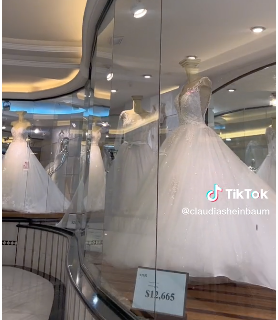 The head of government Claudia Sheinbaum shared a video on his official account TikTok where it gives promotion to Street of the Brides Historical Center, in the street of the Republic of ChileHowever, hours later he regretted it and deleted his video.

Recently sheinbaum announced in a conversation with Martha debayle that she was going to marry her boyfriend, the physicist Jesus Maria Tarriba, so it is to be expected that he is planning the event.

He also shared the news on his social networks where he has been very active, especially on TikTok, since it is known that this platform allows a great reach, because of this it is not the only one that is implementing a strategy on tiktokthere are other politicians who have joined in creating content on this social network, in which he stands out Marcelo Ebrard like Arturo Saldivar, President of the Supreme Court of Justice of the Nation (SCJN), Y Samuel Garcia.

The one who exceeds the number of followers is Marcelo Ebrard with a community of 665.7 thousand followers, exceeding half a million, then there is Arturo Saldivar with 374.8 thousand and Sheinbaum with 368.6 thousand followers.Part of the success for him to win samuel garcia as governor of Nuevo León, it was because he had a great reach on social networks, since his wife Mariana Rodriguez is a influencers with an Instagram community of 2.4 million followers, because at the time it caused controversy for being labeled privileged when she mentioned that she lost her “chancla” in addition to the “Phospho Phospho” among other things.

Their strategy politics it is to gain popularity mainly with young people for this to have an impact before the next elections in 2024, so TikTok is the perfect platform to achieve this.

The average number of people in the world who use this application is mainly in the youth, between the ages of 11 and 24, women are the ones that predominate with 56 percent. The generation Z is the most interested, although it is known that this tends to reach practically all generations.

After the news of the head of government Claudia Sheinbaum is getting married, he uploaded a video to his TikTok account where he showed the street of the brides, located in the Historic Center, on the street of the Republic of Chile.

In the video you can see that a person suggested that they show her a dress model “Carla” because she indicated that it would be the ideal one for her, so sheinbaum She is shown measuring her dress in front of a mirror, at the end you can see the purchase made, however, despite the great reach that said video was adding, it was deleted a few hours later, which shows that she felt regretful in some way.

Subsequently sheinbaum He posted another video on TikTok but in this one he showed himself dancing the famous trends by Merlinawhich confirms that she and her team are aware of the most popular trends on social networks, this video was liked by many as several Internet users commented that they liked its humor.

TikTok has ceased to be a simple entertainment platform, as now this social network is a perfect strategy to achieve a good position, both in politics, as well as in small and large companies to promote the eCommerce.

Politicians seek to reach a young community, since this platform is abundant, most young people are not reading the newspaper or watching TV, but are consuming content from platforms that show immediacy, which they do very well. TikTok.

“Merlina”: the success of Netflix sweeps the viral challenge on TikTok