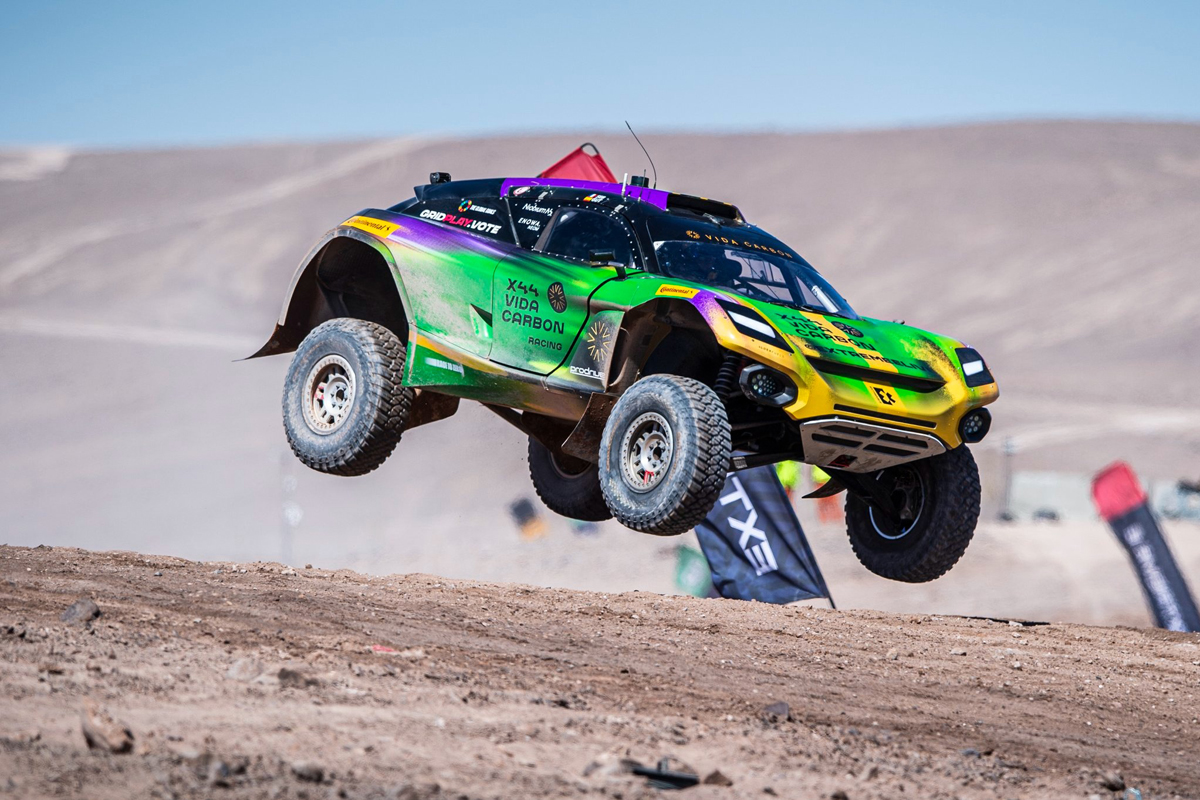 In a tight final, Sébastien Loeb and Cristina Gutiérrez have achieved their second victory in Extreme E, first this season. The X44 duo has overtaken the Ganassi and ACCIONA drivers after the sanction against McLaren.

The couple formed by Sébastien Loeb and Cristina Gutiérrez has won the Copper X-Prix for Lewis Hamilton’s X44 team. In a final that started with the absence of the reigning champions and leaders due to a problem in the Odyssey 21 RXR, the Dakarian couple achieved a brilliant victory, subject to a sanction that has prevented the first victory of McLaren XE.

Sébastien Loeb was the fastest driver at the start, but it was not easy for the Frenchman against the push of Nasser Al-Attiyah and Tanner Foust with the 4x4s of Abt CUPRA and McLaren. For its part, Carlos Sainz also started strongly, but he went long in one of the first left angles. Even Kyle LeDuc was ‘answerable’, although in the fight he hit one of the flags of ‘way point’ 11, a maneuver that finally did not carry a sanction.

Tanner Foust managed to overtake Sébastien Loeb just before the ‘Switch Zone’, although the two ended up entering the pilot change area parallel to each other. Emma Gilmour started ahead of Cristina Gutiérrez, but the Spanish overtook her rival in the first braking. The burgalesa took the lead of the racealthough Emma Gilmour did not lose the trail of the 4×4 of Lewis Hamilton’s team.

After passing through the ‘Switch Zone’, Sara Price came out in third position with Chip Ganassi’s Odyssey 21, leaving behind the Abt CUPRA and ACCIONA cars, already in the hands of Klara Andersson and Laia Sainz. Weigh a step behind the leaders, the theoretical penalty of 10 seconds to car #44 by hitting one of the flags that delimited the ‘way point’ 14 made the fight for victory open on paper.

Index hide
1 There is no sanction for X44, yes for McLaren
1.1 Spanish double podium

There is no sanction for X44, yes for McLaren

Right at the end of the race, the Extreme E stewards released a message correcting their mistake, ensuring that the #44 of Loeb and Gutiérrez had no sanction. In fact, the penalty for hitting two flags was for Foust and Gilmour’s Odyssey 21. McLaren added a 20-second penalty for this reason and fell from the first to the fifth position.

Read:  Álex Palou is not satisfied with IndyCar and opens the door to Formula 1 with McLaren

No more notifications to apply, Loeb and Gutiérrez secured victory at the Copper X-Prix from Chile with the X44 car. For their part, Chip Gannasi’s drivers took second place, a result inherited after the sanction against McLaren, but which is invaluable. In fact, Kyle LeDuc and Sara Price get into the fight for the title in the absence of an event to be played.

After finishing fourth, the sanction against McLaren allowed Carlos Sainz and Laia Sanz to access the Copper X-Prix podium. In this way, the Chilean appointment was witness to a double Spanish podium, since the triumph of Cristina Gutiérrez with X44 was complemented by third place for the ACCIONA teamaward for the great work carried out by the Spanish structure in a complex weekend in many ways.

Two seconds behind ACCIONA’s Odyssey 21, the Abt CUPRA 4×4 reached the finish line, so Nasser Al-Attiyah and Klara Andersson were left without a prizedespite the fact that it was possibly the most competitive weekend for the structure linked to the Spanish car firm.

Twitter launches an aggressive incentive plan to win back advertisers