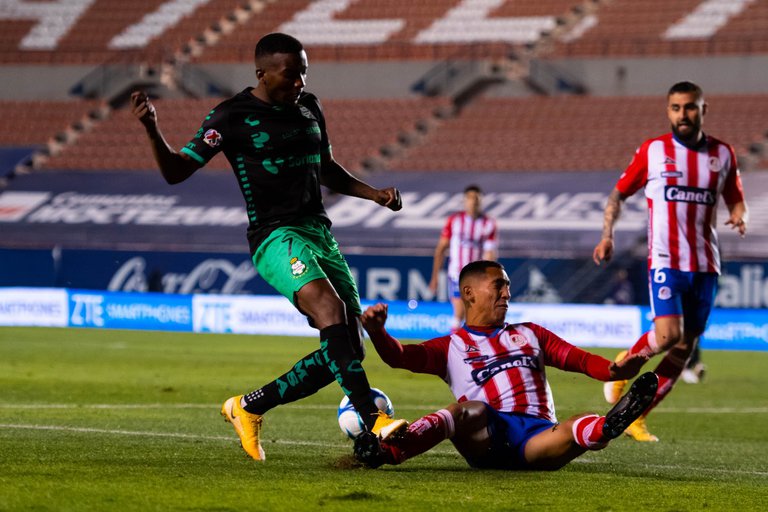 The Grita A21 Mexico will begin its phase repechage on Saturday November 20 in the court of the Estadio TSM between the Warriors of Santos Laguna and Atletico San Luis. This match will mean the pass to the quarterfinals of the Apertura 2021, both teams will seek victory to enter the 8 finalists who will seek to become Mexican soccer champion.

The match will take place in the city of Torreón, on the field of the World Cup Estadio Territorio Santos Modelo (TSM). The building has the capacity to house 30 thousand fans. The match will begin at 7:00 p.m. (Central Mexico Time) and can be seen on channel 7 of TV Azteca, channel 5 of Televisa and the pay signal of ESPN.

On the other hand, the two squads finished in fifth place in the general table with 24 points and in twelfth place with 20 units, respectively. Those led by Guillermo Almada, having finished higher in the table, will receive the game at home, it is worth mentioning that it is a single game, in case of a tie, the winner will go out in penalty shoot- out.

That is why both Laguneros and Potosinos will have a match in which they will leave everything on the court, as the work of a whole tournament is involved. Although on paper it seems the most unbalanced meeting of the whole reclassification, since it faces 5 against 12, on the court anyone can win.

So far, they have met a total of 24 times in both Copa MX and Liga MX, having a statistic in favor of those from the Comarca Lagunera. Torreón whole has managed to get the victory 13 times for only four of the set of San Luis and tied on seven occasions. In Lagunero territory, they have played a total of 12 games, with a favorable balance for the locals with 9 games won, 1 tied games and 2 lost games.

Read:  the diversification of the box to music festivals with Tecate Pa`l Norte

During the course of the week, the Mexican footballer, Omar Campos spoke at a press conference regarding this duel and what they worked on for its preparation.

“The group is very good. We have worked hard throughout these two weeks to obtain the victory against Atlético de San Luis”, mentioned Omar Campos.

Finally, these two teams met in the last match of Grita México A21, obtaining a goalless draw. The team of Marcelo Mendez arrives at this meeting accumulating five games without getting the win, getting two defeats and three draws, due to a series of combination of results given in their favor, managed to enter the reclassification.

It is worth mentioning that Guillermo Almada’s team reaches the meeting with four straight games without losing, two of them with triumphs and a couple of draws. In addition, Atlético de San Luis has one of the current scorers of the tournament with 9 annotations, the Argentine German Berterame.

The winner will immediately know his opponent in the quarterfinals. In the event that Santos wins and enters the league, he will meet the Tigres de la UANL, a team that finished in fourth place. Whereas, if Atlético de San Luis is the winner, it will face the absolute leader of the tournament, the Águilas del América.