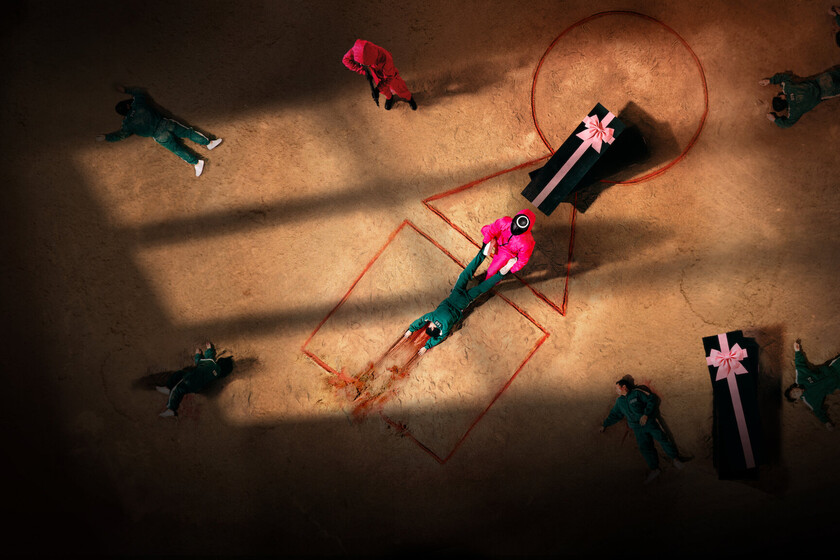 There are few occasions in which the international series of Netflix they are much more interesting than those produced in the United States. For this reason, the platform’s commitment to foreign productions is to be appreciated. Today I come to tell you about one of them, well ‘The squid game’ it has quickly become a popular phenomenon.

Following in the wake of ‘Battle Royale’ and other titles in which its protagonists participate in a brutal competition with the promise of a grand prize, ‘The Squid Game’ is a nine-episode Korean series that works very well as sadistic pastime, but it also has an aspect of social criticism that further elevates the final result.

The premise of this series created, written and directed by Hwang Dong-hyuk, who took more than a decade to get someone interested in taking it forward, is as simple as it is attractive: 456 people agree to be part of a game, since in return they can get a prize that allows them to straighten their lives. The problem is that it is a life or death competition …

This leads to violence having a great presence in ‘The Squid Game’, but always integrated within the careful visual aesthetics that Dong-hyuk endows the series -both in the use of colors and through staging and montage-, in particular in all the scenes within the sadistic game -outside of it everything is grayer, something obviously deliberate-. That’s when we are facing a more stylized work that knows how to integrate the accumulation of corpses and explicit violence without ever falling into bad taste.

To get hooked, Dong-hyuk relies on four essential elements. The first is fun, where the combination of a very characteristic sense of humor that reveals the Korean origin of the series works. Out of sheer necessity, this is something that disappears as the episodes go by, but from the outset it works very well to facilitate the access of the viewer, becoming attached to a certain point with its protagonist played by an inspired Lee Jung-hae.

The second is emotion. It is true that there is only time to really develop a handful of characters, but Dong-hyuk knows very well which keys to play to meet the needs of the series at a narrative level, but without making the mistake of turning them into mere pieces on the board. . The second episode is especially illustrative of this point, being also where its aspect of social criticism, the third leg.

It was to some extent inevitable that ‘The Squid Game’ would enter the opposition between rich and poor, with the latter little less than condemned to a horrible life that they are willing to risk for the possibility of ceasing to be so. There, Dong-hyuk’s scripts are very functional and ‘The hole’ even comes to mind, a film that did not become a great phenomenon until its arrival in the Netflix catalog.

The other key factor in ‘The Squid Game’ is the suspense. And I do not say it thinking about the doubt about what will be the next deadly game that they have to face, because Dong-hyuk takes a risk and does not leave everything related to the origins and links of the competition as a complete mystery. Of course, he does not address it from the beginning and frontally as ‘The Hunger Games’, since here it is chosen to go giving more details in parallel to the progress of the game itself.

It is true that there it can be a bit rough when he connects this aspect with his side of social criticism, but in general it is a success, since it allows giving more variety to the story, opening a different story line that may not be as engaging as watching macabre games, but it does it is big enough not to be thinking that it bothers more than anything else.

As I pointed out before, all this is seasoned by a strong presence of violence, not sparing the use of gore at all. It is becoming more and more common to see movies and series with many deaths but not a drop of blood, something that often makes them feel like something inconsequential. Here the capacity for impact is always used but without falling into gratuitousness or its glorification.

Also, Dong-hyuk knows how to move quite well with the extreme situations that it poses, since the particularities of the different tests enhance the contrast with what is really at stake. There the tension is very well managed, knowing how to create the need for the viewer to continue devouring episodes and using cliffhangers effectively but without falling into the use and abuse of them.

To all that you have to add a very well chosen cast who knows how to handle what the series needs from them, whether they are more extreme characters called to fulfill a very clear role or also those with a more elaborate evolution. And it is that sooner or later it is going to have to do whatever it takes if you want to stay alive, something that the series knows how to tackle very well, proposing different paths depending on the case.

It had been so long since a series had hooked me as much as ‘The Squid Game’, because I would have seen it in one sitting if I had had enough time to do so. It is true that it is far from perfect, but it does know how to handle the ingredients it uses very well to awaken our interest in this macabre competition.

This is how you have to clean the screen of a television so that it does not spoil, according to the experts of the...