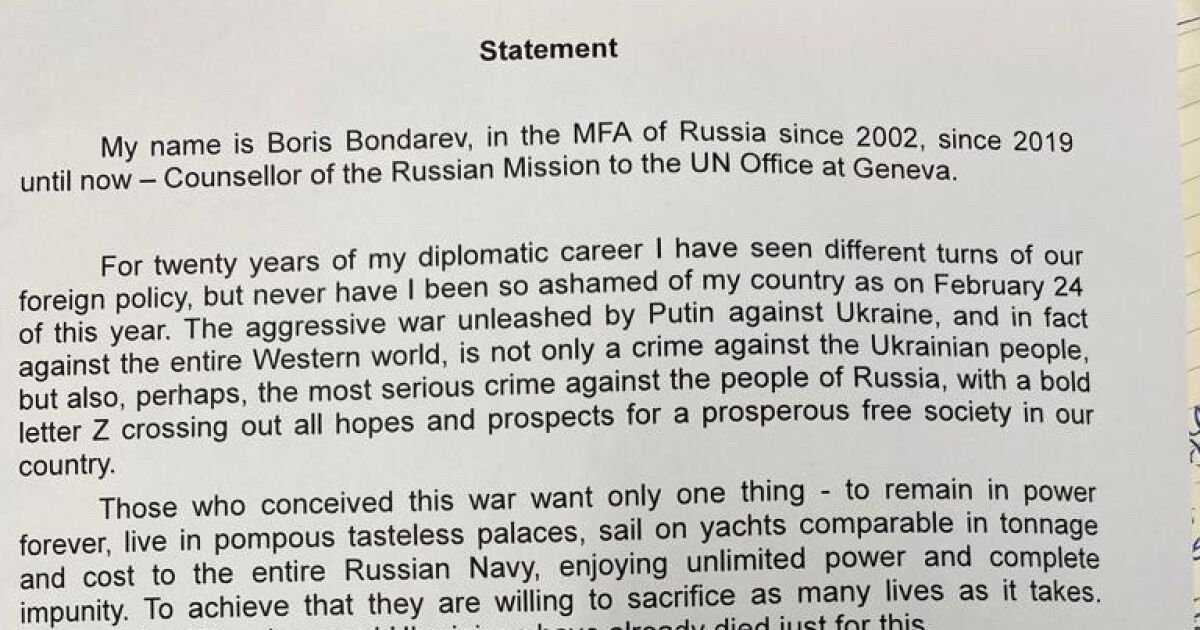 “The aggressive war unleashed by Putin against Ukraine, and indeed against the Western world, is not only a crime against the Ukrainian people, but also, perhaps the most serious crime against the Russian people,” reads the letter, published by the ambassador. Dutch Robert Gabrielse, accompanied by the message “Brave!”.

“In 20 years of diplomatic career I have seen different stages of foreign policy, but I have never been as ashamed of my country as since February 24,” the text added, alluding to the date the invasion began.

UNWatch highlights that Bondarev, who had also worked directly for the Russian Foreign Ministry, is one of the highest-ranking diplomats to “defect” since the start of the conflict.

According to Bondarev’s alleged statement, Russian diplomacy has worsened in recent decades with “an increasing level of lies and lack of professionalism”, a degradation of which the Foreign Minister Sergei Lavrov “It’s a clear example.”

“In 18 years he has gone from being a professional and educated intellectual, who was held in high esteem, to a person who constantly offers conflicting statements and threatens the world, including Russia, with the use of nuclear weapons” , assured.

The resignation, which several sources say is not the first by a Russian diplomat for the same reasons, should encourage other colleagues to follow suit, UN Watch director Hillel Neuer said.

BREAKING: 🇷🇺 Russia’s Counselor to the United Nations in Geneva has resigned.

Boris Bondarev: “Never have I been so ashamed of my country.”

UN Watch is now calling on all other Russian diplomats at the United Nations—and worldwide—to follow his moral example and resign.

“The United States, the United Kingdom and the EU should lead the free world and create a program to encourage more Russian diplomats to defect, offering protection and financial security and a place to settle for these diplomats and their families,” he added.

Read:  Sheinbaum sees the CDMX in orange, but Federal Health places it in red