Ronaldinho appears in a match and celebrates Argentina’s victory 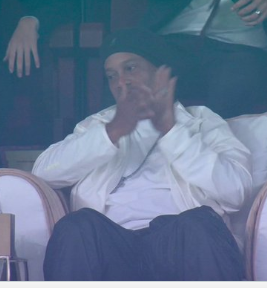 Ronaldinho He is one of the most recognized soccer players in soccer history and was caught celebrating the victory of the Albiceleste team.

The Argentina national team was victorious over Croatia defeating them 3-0, so it is already the first team confirmed to play the final that will be next December 18 at the Lusail Stadium which has a capacity for 80 thousand people.

The time to meet the winner of this edition of the World Cup is getting closer, Argentina is expected to play the final with the current world champions, France. The winning team, in addition to taking the world Cupwill also be very well financially rewarded, since the prize of the FIFA for the World Cup champion Qatar 2022 is valued at 42 million dollarsthis is the highest number of all time for a World Cup.

In the last edition of the World Cup that was in Russia 2018, France was the winning team, for which they took 38 million dollars.

It should be noted that each team that participated will also earn a profit, since they have contemplated 1.5 million dollars, although the range could be higher for those who managed to go further.

The players are a key element for the teams to stand out, such is the case of Argentina with Messi, France with Mbappé, Brazil with Neymar and Portugal with CristianoAt the time, that was the case with Ronaldinho, figured as the maximum star of the Brazilian team, like the season of Peleso it is not a surprise that Brazil is the country that has won a final the most times, it is also known as the five-time champion.

Ronaldinho appears in a match and celebrates Argentina’s victory

Despite the time that has passed, Ronaldinho He continues to be the sensation, much has been said about him since he was captured during Argentina’s match against Croatia, where the first team was defined to play in the final round.

The emotion of the second goal that was made by Alvarez, made him applaud in approval, which was to be expected since Argentina is the only country left to represent the American continent, in addition to Messi has been his playmate, as both were part of the famous team of Barcelona.

Even Ronaldinho has stated that Messi He is a good friend, in addition to affirming that since he saw him, he knew that he was going for something big.

“The first time I saw him in his debut, you could already tell the quality he had and that he was going to do something very big. She knew what it would be. We got along very well. He is a great friend “he recalled “Ronaldinho” in an interview with the Spanish radio program Quintana’s Slate.

Ronaldinho, Lionel Messi, Julian Alvarez
what a frame, Alvarez should save this clip for lifetime and so will I.🤗❤️ pic.twitter.com/Fq1uTM1HbB

In this edition of world, Messi is giving a lot to talk about, both he and his fans hope that he will be the World Champion in his last participation to close his participation with a flourish, if this happens in the not too distant future it will be the maximum representation of Argentine soccer, which managed to return the victory to his country, something that what is considered its maximum could not achieve opponent, Cristiano Ronaldo.

They create a Christmas carol with the “what are you looking at, silly?” of Messi

Martín Demichelis confesses that he likes to see Messi angry