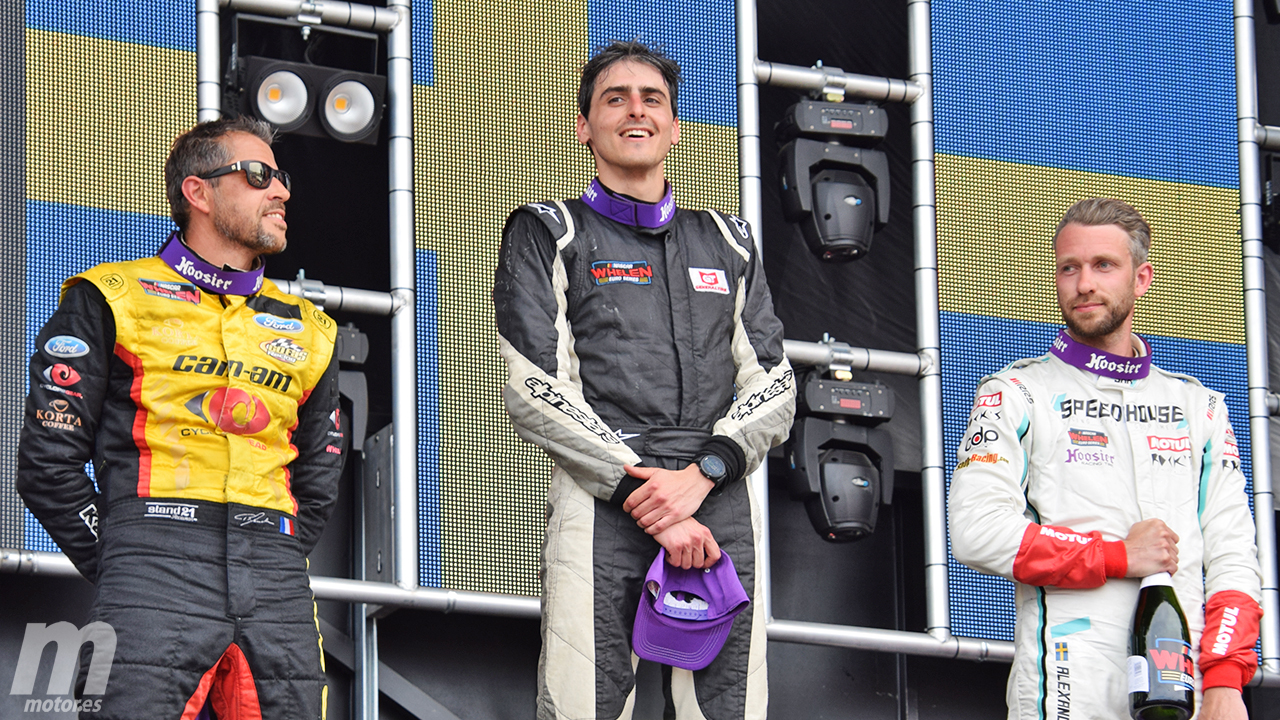 Last weekend, the Circuit de la Comunitat Valenciana Ricardo Tormo in Cheste held the inaugural round of Euro Nascar, the European franchise of the traditional American stock car championship, with the presence of trucks and the French Caterham Cup.

The Euro Nascar, let’s remember, is divided into four races per weekend for two categories, the Pro, with higher level drivers, and the 2 with a somewhat lower level. The car, however, is shared by the drivers of one category and another, so its vicissitudes in each race can affect the driver of the other category. An standard model for all with a 5.7-liter V8 engine and 450 hp which are governed through four gears.

It was the tenth time that the category went to the Valencian track, which with its stadium configuration responds perfectly to the spirit of the American Nascar. In Cheste, knowing in addition to the pull of the category, it organizes a whole series of parallel activities, which meant that both on Saturday and Sunday there was a great influx of public in the stands, which was not intimidated by the heat that devastated the track.

At 1:00 p.m. on Saturday began the first race of the Pro category, with the Swedish rider Alexander Graff on pole position, and at his side the Italian Nicolò Rocca. For his part, the most successful driver in the series, the Israeli Alon Day started from the sixteenth position of the total of 33 cars that made up the grid. With the start launched, Rocca, from the outside, took the lead of the test, while Graff fell to third position.

In second place was the German Tobias Dauenhauer, who started fourth. The race stabilized in the first laps with the first three followed by Fernando Alonso’s former teammate in Formula 3000, the Belgian Marc Goossens, the Czech Giorgio Maggi and the Frenchman Romain Ianetta completing the top six positions. But as usual in the championship, problems came.Specifically due to Dario Caso going off the track in the fourth corner of the Valencian track, which made it necessary to use the safety car.

After four laps holding off the pack while the car was removed and the track cleaned, Rocca did not allow his opponents to get excited about the possibility of taking the lead from him, while Graff did look harassed in third place. On his part, Maggi lost positions, and Alon Day, in a wonderful recovery, was placed in sixth place. The leading trio took advantage of the fights from behind to open a small gapbut rolling quite compact.

Unfortunately, on lap 13 Marc Goossens and Fabrizio Armetta went out in the first corner and motivated a new safety car regime, which in this case lasted for three laps. Again Nicolò Rocca had to face the threat of the pursuers, but showing his veteran in the championship -despite his youth-, he kept the lead. The order of the leading trio remained, but Alon Day showed off his driving and experience to rise to fourth place.

The positions would not change, with Nicolò Rocca starting the championship with a firm victory, followed by Dauenhauer, Graff, Day, the Czech Martin Doubek and the Frenchman Frederic Gabillon in sixth place. For his part, one of the attractions of the championship, the German Lucas Luhr, a veteran GT and endurance driver, had a good debut with eighth place at the finish line from fourteenth starting position. With his victory, Rocca gave the Caal Racing team victory on the day they celebrated his 100th race in the championship.

In category 2, in which pilots with a more amateur grade participate, the Cypriot Vladimiros Tziortzis started in pole position, which he did not lose at the start, nor did the Italian Alberto Naska who kept the second, but not the Czech Martin Doubek who lost third place to the benefit of Luxembourger Gil Linster. The first lap was a compendium of crashes, spins and pieces of fiberglass from the cars flying around the Cheste trackuntil the positions settled.

In spite of everything, it was not necessary to neutralize the race. And although Tziortzis had an irregular start to the race, in which he both opened a distance and was pressured by the pursuers, as the laps passed he began to set a devastating pace for his rivals. The seconds fell forcefully on Naska, who in turn had made a good escape from Linster. It was this one who was pressured by Doubek.

The Czech driver was trying to make amends for his mistake and would succeed with four laps remaining in the race. Arriving at the Doohan curve, second of the circuit, he threw the car inside and drowned Linster, who had no choice but to give in and see how, by rhythm, the Czech finally escaped. Thus the end of the race was reached, with the resounding victory of Tziortzis ahead of Naska and Doubek.

On Saturday, races from the other two categories that accompanied the Euro Nascar this weekend were also held, resulting in a very complete program on the track with hardly any waiting times. On one side was the GP Truck, the national contest in which twelve impressive tractor heads compete. It was the fifth time in the entire history of the Valencian track that trucks competed on the track. With four races this weekend, on Saturday the dominator was Pedro Marco Sánchez with his MAN, while on Sunday José Alberto Vila Sainz would take over, also with MAN, with Pedro Marco having to settle for second place. Some maneuvers were spectacular considering the weight and dimensions of these vehicles.

And at the antipodes of performance was the Cuope Caterham France, which premiered in Cheste to play the second round of his championship, after Paul Ricard. Evidently, the benefits of the Caterham 7s that flooded the track –very large participation in this event- are very different from those of the trucks. The 420R category stood out, with 210 horsepower cars capable of accelerating from 0 to 100 in 3.8 seconds. In this category, the French David Leguem and Jeremy Azar would win each of the races, while in Roadsport, with less powerful cars and designed for beginners, the two victories went to Mickael Mota. The equality in the four races was the tonic, leaving very intense battles in the twisty Valencian circuit, which was perfectly adapted to the idiosyncrasies of the Caterhams.

The Sunday, with an absolutely summer heat but the grandstands full, the other two races of the Euro Nascar would also be run. This time with the reverse order, so that at 11:15 in the morning it was Category 2 that disputed its race. Saturday’s protagonists were once again on the front row: the Cypriot rider, Vladimiros Tziortzis, on pole, and the Italian rookie Alberto Naska in second place. At the start, Tziortzis kept the lead, but was attacked in the second corner by Naska. The Italian had better traction at the start, and with a nice parallel he managed to snatch the lead from Tziortzis.

Behind them were Gil Linster, Martin Doubek and Liam Hezemans, but this trio couldn’t keep up with the leaders. The duel between the two became more and more intense, and it was obvious that Tziortzis had a better rhythm than Naska, who nevertheless defended himself with great ease. Until the fifth lap came. After exiting the first corner, the Italian rushed to protect the interior against the pressure of the Cypriot, who went to the outside in the second corner. With better braking, he attacked the apex with more traction and coming out of the corner managed to overtake Naska on acceleration, completing an aesthetically beautiful maneuver.

From there, Tziortzis began to replicate his first race, setting fastest laps to leave Naska behind, who was unable to sustain the speed of the leader. Behind them a real three-way fight broke out between Doubek, Linster and Hezemans. Especially close was the fight between these last two, which allowed Doubek to take some distance. However, Linster was repeatedly breaking the track limits, which would eventually lead to a penalty at the end of the race. Nothing changed in the lead, with victory and a double for Tziortzis, followed by Naska and Doubek who accompanied him on the podium, with Hezemans in fourth place and Uysse Delsaux finally fifth, as Gil Linster fell to sixth place. However, after the race irregularities were found in Tziortzis’s car, which meant a 10-position penalty and Naska obtained victory in his second race in the competition.

And to end the day, the second race of the Pro category, which promised quite a few emotions watching the grill. On pole was Italian Gianmarco Ercoli with Swedish Alexander Graff next to him. But behind was Alon Day in third place, Dauenhauer fifth and Rocca seventh, which allowed us to predict an offensive race. At the start, Ercoli kept his position well, but saw Day move up to second right at the start by overtaking Graff. However, the first lap would not finish and there was already a first safety car for the exit of the track at turn 4 of the Italian Davide Dallara, who stayed in the pozzolana in addition to leaving the track with pieces.

The order was Ercoli, Day, Graff, Dauenhauer, the French Romain Ianetta and Rocca. The safety car left the track on the fifth lap, which Day took advantage of to start his harassment and knock down Ercoli. The Italian resisted the pressure of the Israeli, while from behind Graff made some block to his pursuers. The race seemed to stabilize until with 5 laps to go, Dario Caso caused a safety car. It was going to be a shock to the race.

When it resumed, with two laps to go, Alon Day accelerated ahead of time and took the lead over Ercoli, who had also rushed at the start. The new leader was Day, who with his experience became untouchable and crossed the line first, heading to Victory Lane to celebrate his victory. However, being there The news of the investigations arrived: Ercoli had already received his and fell to sixth place at the finish line. To Day’s annoyance, he also received a penalty and was even deprived of the podium, falling to fourth place.

Thus the joy of Nicolò Rocca exploded, who had managed to come back to third place at the finish line, but who suddenly found himself with his second victory of the weekend. The Italian had already made a great comeback to third place, but with the appropriate penalties, he firmly climbed to the top of the championship. The podium was delayed, but the Italian could finally celebrate accompanied by Romain Ianetta in second place and Alexander Graff in third. That was what he experienced on the track, but at night, heThe organization reviewed the material at the request of Alon Day and Gianmarco Ercoli, and both were replaced in their positions at the finish line, so that the victory went to Day, the second to Ercoli and the third to Rocca.

Thus ended the first appointment of the Euro Nascar, which is now heading towards its second appointment at the Brands Hatch circuit next June 11. Rocca has started the championship regularly, but Alon Day, three-time champion of the championship tied with the Spanish Ander Vilariño, is seen as the great rival of the Italian if he wants to be champion for the first time.