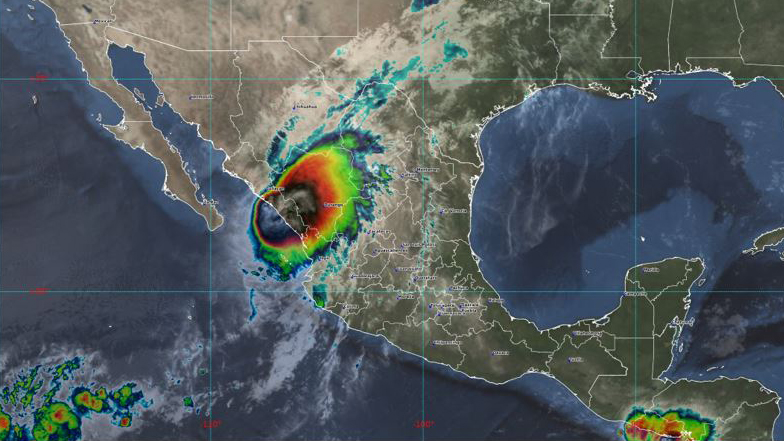 EFE.- ANDCyclone Rick evolved in the last hours into a category 1 hurricane on the Saffir-Simpson scale and advances off the coast of the state of Guerrero, in the Mexican Pacific, reported this Saturday the National Meteorological Service (SMN) of Mexico.

“Rick, now a category 1 hurricane, on the Saffir-Simpson scale, is located south of Guerrero,” SMN indicated in its most recent report.

The phenomenon moves to the north-northwest at 9 kilometers per hour (km / h) and registers sustained winds of 120 km / h with gusts of up to 140 km / h.

The SMN said that Rick’s cloud bands “will produce torrential punctual rains that could generate landslides and floods in areas of Guerrero and Oaxaca, as well as very heavy rains in Michoacán, Puebla and Morelos.”

In addition, he explained that the rains produced by the system could generate “Increase in the levels of rivers and streams, landslides and floods in areas of Guerrero and Oaxaca” and wind with gusts of 60 to 70 km / h and waves of 2 to 4 meters high are also forecast on the coasts of Guerrero and Michoacán

Because of this, the agency, in coordination with the Miami National Hurricane Center, established a surveillance zone for hurricane effects from Técpan de Galeana, Guerrero, to Punta San Telmo, Michoacán.

In addition to a surveillance zone for tropical storm effects from Tecpan de Galeana to Acapulco, both in Guerrero, and from Punta San Telmo, Michoacán, to Manzanillo, Colima.

He also asked the general population in the areas of the states mentioned to be extremely cautious due to rain, wind and waves (including maritime navigation) and to attend to the recommendations issued by the Civil Protection authorities in each region.

Read:  Netflix launches the site with the Top 10 series and movies

According to the meteorological forecast, Rick will strengthen to a Category 2 hurricane in the early hours of Sunday and it could reach category 3 after noon tomorrow when it is located about 200 kilometers south-southwest of Zihuatanejo, Guerrero.

Given the advance of the cyclone, the SMN foresees torrential punctual rains (from 150 to 250 millimeters (mm)) in areas of Guerrero and Oaxaca; very strong (from 50 to 75 mm) in zones of Chiapas, Michoacán, Morelos and Puebla; strong (25 to 50 mm) in sites in Mexico City, Colima, State of Mexico, Jalisco, Tlaxcala and Veracruz.

On October 13, Cyclone Pamela made landfall as a category 1 hurricane in the state of Sinaloa, in the Mexican Pacific, where after its passage it left 2,000 families affected, in addition to 9,000 victims in the neighboring state of Nayarit and material damage, especially in the electrical network.

Mexican authorities predicted the formation of between 14 and 20 named systems in the Pacific Ocean last May for this season, while for the Atlantic it foresaw 15 to 19 meteorological phenomena.

Dolores made landfall in mid-June, killing three from electrical storms.

In the Atlantic, where 20 named cyclones have already been recorded, the most devastating being Grace, that in August left a total of 11 dead, eight in the state of Veracruz and three in Puebla.

While Nora, who made landfall on August 28, caused the death of a minor in the state of Jalisco and seven disappeared, six of them fishermen from the state of Guerrero.