Ricardo Salinas suffers an accident and goes to this exclusive hospital

By NicolasJanuary 26, 2023No Comments4 Mins Read 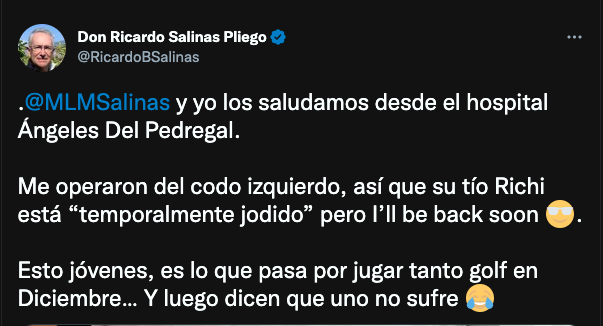 Health is not only a right but also a universal issue. Everyone is exposed because no one is invincible or immortal. Not even the world’s wealthiest people are spared from an accident and a clear example is the Mexican businessman Ricardo Salinas Pliego. To date, he is recognized for his controversial publications on social networks that generate a division of opinions.

The founder and owner of emporiums such as TV Azteca He was one of the main enemies of the measures adopted by the Mexican government during the pandemic. On multiple occasions he said that the confinement only harmed the economy and the ideal was not to be afraid of Covid-19. He even stated that “we all have to get it.”

Although paradoxically, at the end of 2020 the tycoon announced that he was infected. Although thanks to prompt medical attention he managed to overcome the disease to resume his daily activities.

Index hide
1 Problems of millionaires: Ricardo Salinas suffers an accident “for playing golf”
2 Main advantages of private hospitals
3 For now, according to your knowledge, what do you think was the real reason for the accident suffered by Ricardo Salinas?

For his part, today Ricardo Salinas was back in the news because he suffered an accident. The news was confirmed by himself through his social networks. He only limited himself to saying that he had a fractured left elbow “from playing so much golf in December.”

At the same time, he shared that he went to the Angeles del Pedregal Hospital, located south of Mexico City, to be attended. Automatically it had to be underwent emergency surgery but said that everything turned out favorably. Therefore, he is now hospitalized and recovering.

.@MLMSalinas and I greet you from the Ángeles Del Pedregal hospital.

I had surgery on my left elbow, so his uncle Richi is “temporarily screwed” but I’ll be back soon 😎.

This, young people, is what happens when you play so much golf in December… And then they say that you don’t suffer 😂 pic.twitter.com/tE4mQ3njLS

In this sense, it is worth remembering that it is the largest private hospital chain in Latin America. It stands out for having state-of-the-art technology such as a Robotic Surgery Center that few hospitals in the region have.

In fact, in the constant rankings that are carried out to know the best private hospitals in Mexico, it always appears in the first places. The podium always competes with the ABC Campus Observatory Medical Center and with Médica Sur.

However, as with most hospitals in the private sector, the main problem is that not everyone can access these types of places. The price of the services is too expensive and is beyond the reach of the income of the majority of Mexicans.

On the other hand, within the benefits of private hospitals is the immediate attention that is received because it is not necessary to queue for hours or request a file as is the case with the IMSS and ISSSTE.

Similarly, the facilities and equipment used are usually modern and state-of-the-art. While medical staff also receive more attractive salaries than in public health.

For now, according to your knowledge, what do you think was the real reason for the accident suffered by Ricardo Salinas?

Ricardo Salinas, owner of TV Azteca, has Covid-19 and says: “he has to give us all”

Ranking with the 50 best private hospitals in Mexico, do you work in one?

Amazon hired a Mexican doctor to make video reactions: This is the result