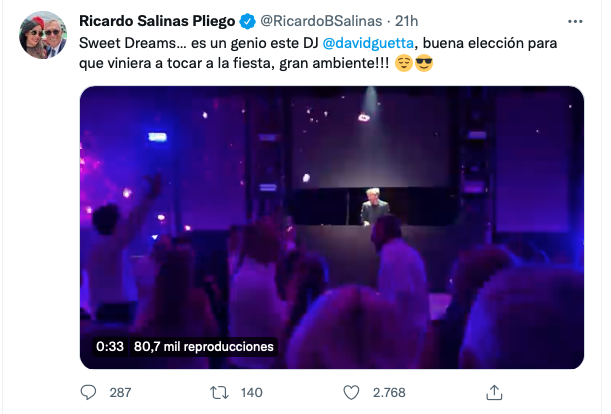 There are many celebrities or millionaires who use their social networks to document every detail of their day to day life, and many times even to promote their lifestyle to other people who may not have the same purchasing power as them. This is the case of the Mexican businessman Ricardo Salinas, who has become a relevant figure in social networks, where his latest controversy includes the promotion he made to the famous DJ David Guetta.

Social networks have become the best advertising showcase in the world, since they register 4 thousand 620 million network users worldwide, which represents a year-on-year growth of more than 10 percent, according to data from the last study conducted by We Are Social and Hootsuite.

Celebrities or public figures seem to know this fact very well, since with a single click they are able to position themselves with their promotional marketing any product, artist or even news that they share with the rest of the world in these small digital windows.

Even if it is sporadic and organic, everything that a famous person shares on their networks can become attractive to their fans and the rest of the mortals who follow them. In the advertising industry, this can be known as promotional marketing, which consists of motivating people to buy the product or service you offer through an extra action.

After documenting one of his last trips around the world, the businessman and owner of Grupo Salinas, Ricardo Salinas, once again shared on his Twitter account, where he has more than a million followers, a party that he was invited to in Slovenia, where the person in charge of musicalizing the evening was David Guetta.

Sweet Dreams… this DJ is a genius @David Guetta, good choice for him to come play at the party, great atmosphere !!! 😌😎 pic.twitter.com/Mkonm4rA9s

This action carried out by the third richest man in Mexico demonstrates the power of his personal brand in networks where on many occasions like this he has promoted his lifestyle, registering positive comments from his followers. Although many times he has also won detractors who criticize him and describe him as “presumptuous”.

What a good party Don! Greetings from CDMX

Oh sir, how aspirational you are. Showing off trips and DJs is very much from his generation of ruquitos who miss the PRI. Poor you, with so much money and so much urgency to show it… the things that you enjoy, we even forget to show them. That’s how empty his life is.

That Don mentality @RicardoBSalinas It is somewhat bizarre, showing off on social networks the life of luxuries and privileges.

There are many entrepreneurs who use their social networks to promote a service or product. We have as an example Elon Musk who is considered according to Forbes magazine as the richest man in the world, who has used his digital platforms on many occasions, especially Twitter where he has a community of more than one hundred million of users to recommend the use of the Dogecoin cryptocurrency. Given this, it is known that every time Musk promotes cryptocurrency, its value rises in the market to position itself in high numbers.

Read:  "They forgot who I am", Ricardo Salinas explains why they closed the Arena Ciudad de México

In conclusion, the influence of celebrities on their followers can be a good tool for brands or even for themselves if they manage it well. and can get to generate a good positioning of anything.