Bullfrag
Home Uncategorized Ricardo Salinas exhibits the family adding hair to food so as not... 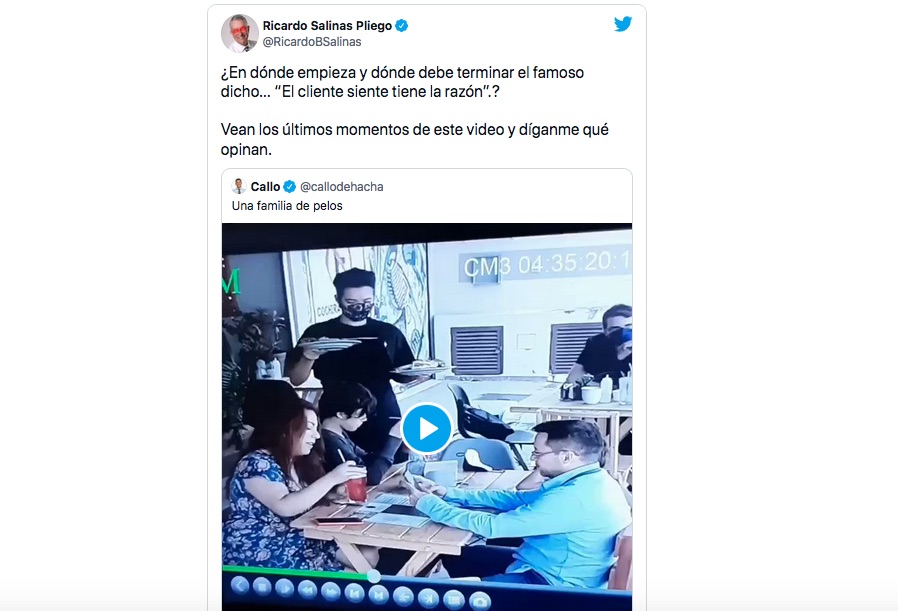 Ricardo Salinas placeholder image has joined the conversation generated by the dissemination of a security video, where a family is shown adding hair to their food in order not to pay for it.

The material is proof of how important customer service has become today and how this area has to evolve, in order to respond to all customers, especially when brands have to face bad consumers, who generally abuse of the resources available to meet their demands.

The case that has been exposed again by Salinas is made with a question and is proof of how relevant it is to understand consumption and the culture that is around it.

Between “Pelos” and diners

Ricardo Salinas has revived a debate where he shows how a family resorted to ruining their dishes to argue bad service and not pay for it. The bad experience has gone viral and the businessman has been in charge of igniting the debate by asking where does the famous saying begin and where should it end … “The customer is always right”?

If you ask, you add to the debate that already existed in networks, after the affected restaurant decided to exhibit abusive diners who created a bad experience in order not to pay for what they consumed.

The events that would have occurred in a restaurant in Mexico City show how for the second time the same family tried to accuse the establishment of serving dishes with hair, however, the evidence has shown how the woman pulls out her own hair to dirty the meal.

As part of the testimonies that have been made about this case, one of the waitresses noticed that the man who appears in the video yelled at her and accused the employees of being “pigs”.

The incident had already occurred a month before and now the videos have been reviewed showing the family’s acting signature, which has been displayed.

Where does the famous saying begin and where should it end … “The customer feels they are right”?

Watch the last moments of this video and let me know what you think. https://t.co/p9vXpPWixa

Bad consumers at all levels

Bad consumers exist at all levels, the case shown in a restaurant is similar to the one reported by an entrepreneur dedicated to designing entrepreneurship courses and who exhibited on social networks, the way of operating of one of the users of his courses.

In a video of the complaint, he begins by remembering that he was contacted by a person who said he was deceived by the course he acquired, for which he asked for his money back. When communicating with his team they pointed out that it was a recurring pattern of this person, who constantly bought courses, apparently downloaded them to profit from the information obtained and asked for his money back.

With knowledge of these details, the entrepreneur returned with the bad consumer and the warning that he would no longer buy his courses, since they would not be reimbursed, an indication that he ignored to demand the return of a course he had purchased.

Faced with the refusal of the young businessman, the aggressor told him to be very careful as he was clearly identified.

Both cases are unfortunate testimonies of a problem that brands must face right now: bad consumers who are wearing out customer service.

how they work and why use them