review with trailer, price and game experience for Windows 10 (Microsoft Store and Steam) 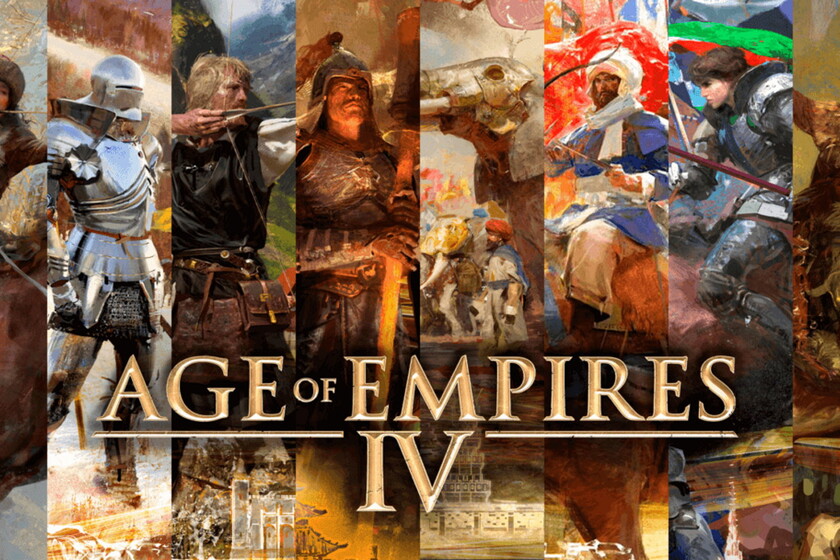 Within real-time strategy (RTS, for short) there are proper names that stand out from the rest and whose origins date back to the end of the last century. Command & Conquer, Warcraft / Starcraft and Age of Empires are, without question, absolute referents of a time of glory on PC that has been polished over time thanks to the success of each and every one of those classics.

And if we look at what has come out in the last five years, Microsoft has put a lot of effort into renewing the Age of Empires brand by means of definitive editions for his original trilogy. But you cannot live solely and exclusively from the past, no matter how much it has accompanied those releases with new expansions or special content, such as Batalla Campal, hence we were dying for a delivery that would continue its legacy. The long-awaited Age of Empires IV.

The spiritual successor to the iconic Age of Empires II

Not counting the recent (but familiar) Age of Empires: Definitive Edition, the update of The Age of Kings and the return of the risky third chapter, we were technically Without a new Age of Empires a whopping ten long years. Specifically from that ephemeral experiment called Age of Empires Online.

And the witness has had to be taken by a veteran study in the field such as Relic Entertainment, known for its Company of Heroes and Warhammer 40k: Dawn of War. With the help of World’s Edge and the support of the Xbox Game Studios brand, this Canadian studio has chosen, as it recognized in our Age of Empires Fan Preview interview, to go back to the Middle Ages. The reason is obvious: an era with huge (highly recognizable) empires across the globe.

You can see that the classic 1999’s Age of Empires II: The Age of Kings was the benchmark, but Relic wanted to disengage to offer his own vision of that medieval period. His greatest contribution in this regard? Fewer civilizations, but with more substantial differences. Or as its own creators say: asymmetric civilizations. Each one is played and feels completely different, even if there is a common base for all of them (four resources and archetypal units).

This had already been more than palpable in our first contact as a result of its two betas and playing with each civilization in the final version more calmly does nothing more than corroborate what was evident. Quality is more premium than quantity and this benefits you in the long run by requiring much more practice mastering your eight launch civilizations. And they all have their crumbs.

The most classic and simple to master is the civilization of the English, while with the Mongols we will be facing a difficult situation of being in constant movement. Not in vain this civilization stood out for its nomadic character, applied here in the ease to dismantle almost any building and transport it elsewhere. In addition, they do not have walls, which further emphasizes that restless spirit with which chestnuts will have to be sought … and stone quarries to make the most of their special building. The contrast is radical, without a doubt.

Relic has respected the essential pillars erected by Ensemble Studios, but at the same time he has wanted the way to face a game with each civilization cause a change of chip in our brain to adapt to its particular way of progressing through the ages, maximize the benefits of resources or use any of its unique units The best way possible. And it has merit being eight.

Ironically, that number of armies (viz .: English, Chinese, French, Holy Roman Empire, Mongols, Rus, Sultanate of Delhi and Abbasid Dynasty) does not correspond to the number of campaigns, which in this case remains in half. Thus, it focuses only on four historical moments: The Normans, The Hundred Years War, The Mongol Empire and The Rise of Moscow. Nothing more.

And as is logical in each of those campaigns there will be a good handful of missions (35, to be exact) against other armies of the time, covering a range of 500 years of history, from the Dark Ages to the Renaissance.

Each mission recreates in the most reliable way possible a historical battle and where, of course, there will be figures of the stature of Genghis Khan or Joan of Arc. Sometimes they will play sieges, at other times ambushes (like the famous mock withdrawal of the Mongols), but always with that Age of Empires touch so characteristic so that the bug bites us to remember our history.

The best of each of the campaigns? Undoubtedly the enormous audiovisual documentation to put us in position before each battle. Here it should be made clear that Age of Empires IV is perfectly localized into Spanish (voices and texts), which is very appreciated knowing the large number of videos, as a documentary, that will allow us to see what the areas where those bloody battles took place are now or to know the ins and outs of the soldiers or the weapons used . Very curious, for example, the process of reloading the crossbows beyond the obvious. It is as if we were before a special of the History Channel.

Many of these videos are incentives, as a reward, for completing the different missions that are entrusted to us in the campaign, having a series of documents to learn about other historical facts. In addition, we will unlock a series of distinctions for our coat of arms (the image of our profile, basically) and a monument to highlight a milestone.

Read:  Bombshell! Pikmin 4 is finally a reality and will arrive in 2023

Obviously the campaigns are enjoyed regardless of these awards, but the concern to offer a more historical veracity with each of the campaigns after the “war” that can give us some mission due to the implacable toughness of the rival AI is a detail if we rest on our laurels.

Age of Empires IV, the new stage of a legend

This cultural richness does not always manage to shine brightly within the missions of the campaign itself due to situations (sometimes) somewhat forced to accurately recreate a crucial scene (especially at the beginning, which sins as a camouflaged second tutorial), except in the face of the exposed of the great difference in the style of game of the available civilizations. For example, the Chinese with the dynasties to progress or collecting taxes with imperial officials.

Yes, the ideal would be to have eight campaigns and not just four, but in part it is by sticking to a few historical figures and respecting the factions they had to face. Now, launch does not have the section of mods (will arrive soon) and the Art of War section is somewhat lame compared to what was received in the Definitive Edition from the original trilogy.

What does not mean that this mode continues to seem like a great option to polish our style of play, from the basics to the most advanced and always with a time marker and with different objectives to see if we can achieve the long-awaited gold medal. If we want to venture into online mode it will be vital.

Because grace, and where a good part of its popularity still lies, is in the face of skirmishes in online matches. We can practice with the AI, of course, in different degrees of difficulty and controlling all kinds of parameters, but the acid test is still people and here we will have to practice a lot so that the experts do not crush us. Of course, no matter how much improved drive layouts to make them more easily recognizable Across the map, there is still some chaos when hundreds gather in combat.

And since we talk about design, Age of Empires IV launches engine in the saga with a much more advanced and polished generation of the Essence Engine released in 2006 by Relic Entertainment. It will not dislodge our jaw, but it does stand out for the endless minor details that will make the whole stand out, such as elements that appear to give the houses a showy character or simply the way in which multiple paths are automatically generated.

The latter is just an aesthetic detail that does not affect the playable section, in any case. Where there are improvements is at the interface level, with more relevant information on the screen (thanks to its HUD renewed without obstructing the vision) and not a few aids in this regard with the simple intention of facilitating any task.

If we stick to the mechanics, there is a new one and it is that of ambushes, to power camouflage our army in certain areas with lush vegetation (No, the trees felled by the villagers are not worth it; they are still obstacles), but it is not a tactic that can be properly exploited on every map. After all, the classic pattern remains the same in order to create our empire and create the subsequent offensive, although now everything is more comfortable to enjoy many facilities in this regard, both to build a wall (when the wall is made of stone we have to shoot of siege weapons to destroy it, eye) as in the face of micromanaging the army or resources, more comfortable than ever.

Relic has taken the best of each Age of Empires to shape a new direction for one of the most successful sagas in RTS. Although there will be conflict, as always: purists will continue to go for the classic while other people will embrace the emphasis on those asymmetric civilizations. And anyway this is just the beginning because it will expand its content in the future (like the addition of mods), apart from seeing how it performs in online competitions with people who are experts in the field. But we have to celebrate it falls out of the box.

Age of Empires IV: Standard | Windows 10 – Code in the box

Definitely, Age of Empires IV stands up well to comparison to iconic sequel, surpassing it unopposed in how varied civilizations are now (finally) by following the depth that my dear Mythology (still my favorite). If you have been with the saga created by Ensemble Studios since its inception there is no reason not to immerse yourself in this new adventure, especially if you are subscribed to Xbox Game Pass, coming standard with this great service.