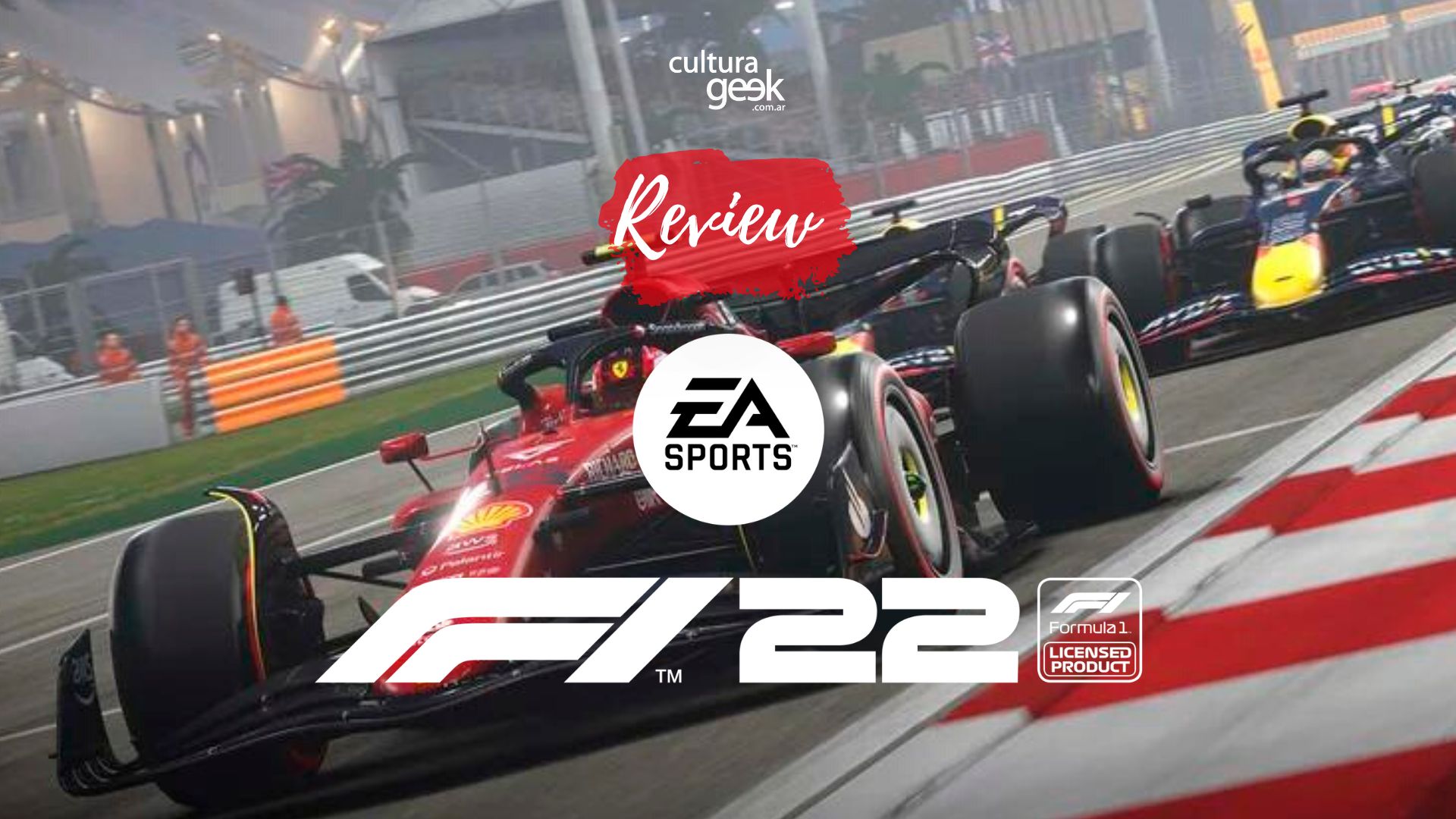 Index hide
1 F1 22 is the first game in a new era in Formula 1 regulations and under the wing of Electronic Arts, with new modes and improvements. Know all the details of its PS5 version here!
2 Life improves if you have a steering wheel at home with the F1 22
3 Changes from year to year
4 Share it with whoever you want
5 Related Posts

F1 22 is the first game in a new era in Formula 1 regulations and under the wing of Electronic Arts, with new modes and improvements. Know all the details of its PS5 version here!

F1 22 is the new name of the Codemasters Formula 1 game saga, now featuring a new “boss” after the purchase of the developer by Electronic Arts. We played this new edition on its PlayStation 5 version, where we enjoyed its realism, missed some modes and felt the changes in this new era of F1 ground effect. Every detail in this note.

Within the game we notice the new aerodynamic rules, tires and more robust cars that began to be used in this season that Max Vertappen reigns. This new handling sensation together with a much more immersive transmission in relation to previous deliveries, make us feel like professional pilots, but it should be clarified that if you are not a sim racing or an avid player of the saga, you will not notice a substantial change from year to year apart from the new circuits and cars. The parallel can be drawn with a soccer or NBA game, where the changes in the gameplay are improvements, although in the case of F1 year after year the realism adds more and more points.

But with that said, the added feel and realism is so significant that it can be both a positive and a negative at times. The developers, in their attempt to make the simulator as real as possible, generated, for example, that errors also occur when stopping at the pits or boxes and that subtracts key seconds that cause the loss of the race, something that can easily happen in real life. The only aspects of real life that they did not add, are the Porpoising and bottoming that drives Lewis Hamilton so crazy every race Sunday.

They are two phenomena that were increased by the new regulations of the single-seater, these effects produce that the cars seem to be rebounding and shaking the heads of the drivers. The decision not to include it may be the correct one, since playing with VR (in PC mode) and not having the proper training to withstand this type of movement can cause dizziness and this new function would not be used to the full. Although extreme realism is never bad, perhaps as an option. The same goes for damage, where we’ll see significant car damage, but not to the point of seeing total destruction like Mick Schumacher’s crash in Monaco, which literally ripped his car in two. We assure you that this is an advantage for us, but with the new weather system in the game, in a race in heavy rain we will not be able to achieve a single corner without destroying the entire car.

Another option that Codemasters included in this game are races type sprint. (A sprint race is basically a shortened version of a regular race, held over a shorter distance and a few times a year on Saturdays awarding fewer points than the next day’s race.) Now you will be able to run the entire weekend, with practices, qualy, sprint and race.

One of the great recommendations when playing a game like this is to see if you have the opportunity to try it with a steering wheel. Yes, the PS5 controls provide outstanding feedback and sensations, but in our case we tested the game with the Logitech G923 trueforce which gave us a sense of high quality realism. the resistance of the steering wheel, the changes in paddles, and the metallic pedalboard among other things, it was an epic sensation that any car lover will enjoy.

The steering wheel connects to the PS5 via a cable, and comes in several formats to adapt it to a table, a chair or wherever you want to place it. This is the most difficult part, but then, once armed, the advantages are very high. The curves can be taken with the angle you want, the changes are much more intuitive. All this with a build quality that stands out in the market.

Changes from year to year

The F1 22 It is the installment with the most changes in its modes, although perhaps some missing ones are missed. For example, something that hurt us to see go was the cinematic mode “Braking Point”. The growing popularity of F1 in recent years thanks to Netflix with his documentary series Drive To Survive and the exciting final season of the Formula 1made us want to relive the drama of the pilots in novel style mode, this mode would have fascinated the new audience that will have the F1 2022.

Read:  Lada Lyumos makes us fall in love with a cosplay of Kitagawa Marin from My Dress-Up Darling

Not having this story mode where we explored the relationship between teammates, the challenges in the races and learned the basic controls while playing, is something that we will certainly miss and that could be a nice entry point to the new F1 crowd.

Outside of this point, let’s look at some of the new changes. F1 2022 It will feature Virtual Reality on its PC installment (something we’d love to see on PSVR). The devices that those looking for the best experience can use are: Oculus Rift and HTC Vive. These plugins are usable in all modes, taking the immersion of the Formula 1 to the next level, where you can confirm how difficult it is to be a professional racer. Even the voice of the engineer you hear is a former F1 engineer…

And for those who wish to interact with other users we will have F1Life, a social platform that will serve as a meeting point for all virtual pilots. This is where users will be able to display their collection of cars and trophies, as well as the ability to customize their avatar and department, using the pitcoins to purchase products.

Speaking of showcasing his own cars, for the first time in the franchise, the F1 22 will have the supercars. street cars like McLaren, Mercedes, Aston Martin and Ferrari can be used in different types of races, as well as in the mode F1Life. We will have competitions where users will be able to unlock new cars, even being able to race with them. Safety Cars.

as far as My Team and Career Mode (can still be played with two players) EA Sports and Codemasters added more content focused on off-court actions as well as new interactions and questions that will directly influence the game. Inside of the career mode, we can choose to start in Formula 2 and go through a whole season so that a team signs us and change category, or directly start in Formula 1, in the team that attacks us the most, being able to choose which of the 2 current drivers of the franchise be our partner (yes, we can leave out of the team to hamilton either Verstappen).

But the season will not only be running races and making statements, but we will also have to make modifications to the vehicle (aerodynamics, chassis, engine and durability) and allocate resources to the different departments for development for the creation and evolution of modifications. . We will also have the chance to compare our cars in different areas with our rivals and see where they take advantage of us to adjust our strategy.

Finally, we are pleased to report changes in the development of the pilot to increase its status and price. The relationship with the social media team or the feedback with development engineers (by reducing engine wear) will increase your prestige per race. Players will have the option to adjust the difficulty of the new events between Beginner, Intermediate, and Title Contender.

The F1 2022 It is, without a doubt, a game designed both for someone who casually began to venture into Formula 1 and wants to feel the speed and adrenaline that the drivers feel, as well as for the veteran player of the saga, who wants to be in all the details of the cars and the team, with the addition of the VR and the lobby of F1Life.

Creating your own team will also be an excellent challenge as we saw in past editions, which gives the game a long lifespan, replayable and above all challenging thanks to its wide level of customization of the controls that range from the sensation of a bumper car from amusement parks to a realism so extreme that it becomes unmanageable where you are going to take into account everything, even how to consume the tires and your driving angle.