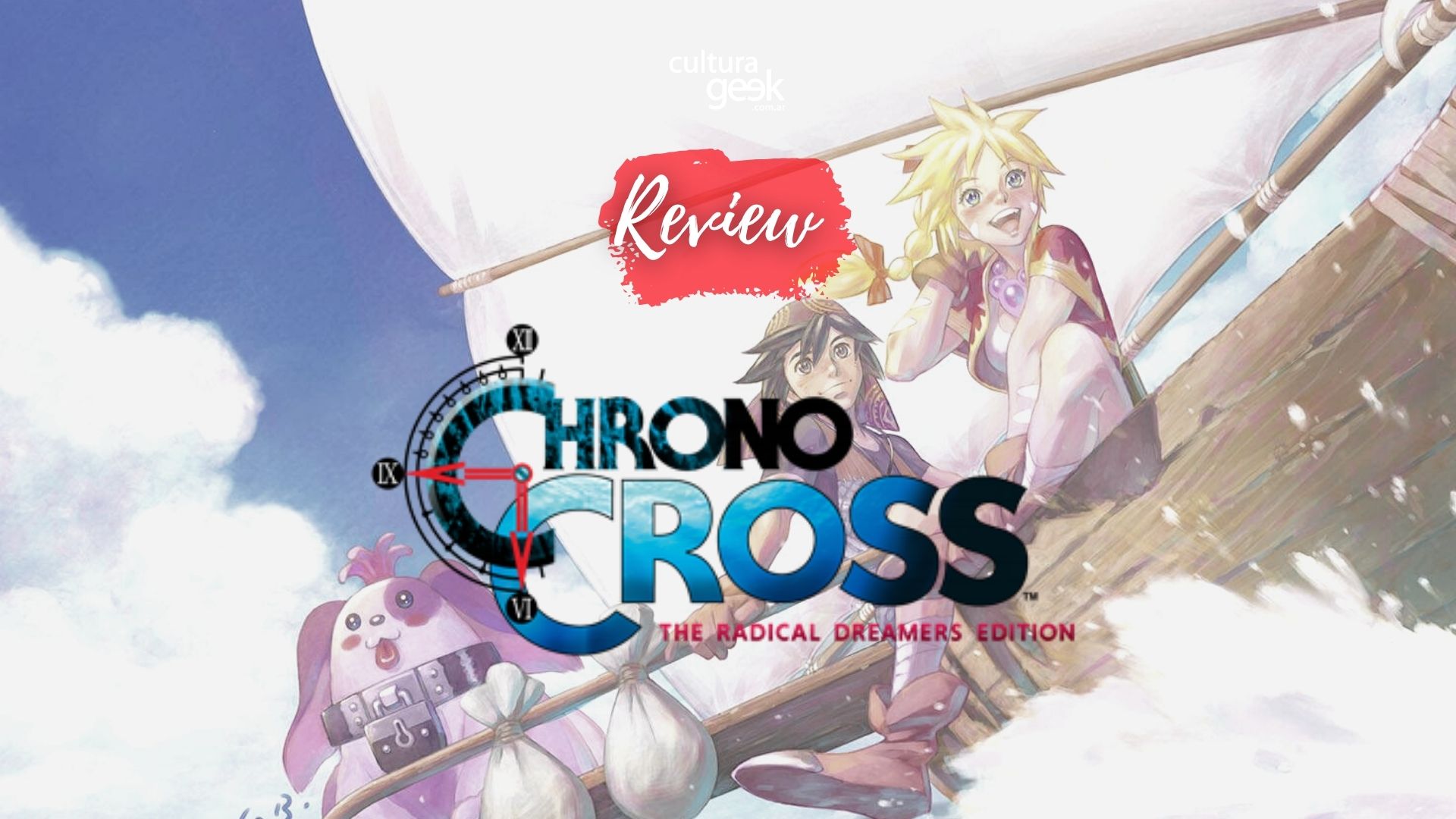 Index hide
1 Square Enix brings classics from over 20 years ago to the present with Chrono Cross: The Radical Dreamers Edition. Get ready to wander through a parallel reality in this Nintendo Switch review!
2 Share it with whoever you want
3 Related Posts

Square Enix brings classics from over 20 years ago to the present with Chrono Cross: The Radical Dreamers Edition. Get ready to wander through a parallel reality in this Nintendo Switch review!

Chrono Cross: The Radical Dreamers Edition arrives at switch with all the nostalgia of a classic combo, but with some fresh touches for the times. By the side of Chrono Crossaccompany Serge on the journey to discover an alternate reality where his life seems to have had a tragic fate, to then take turns between both planes and meet great adventure companions. On Radical Dreamers, I experienced the prequel and inspiration as a visual novel on which the previously mentioned issue was based. Find out what they are about and what changes they bring in this review for Nintendo Switch!

The story of Chrono Cross focuses on the young Serge and a plot of parallel worlds. One day, the boy meets his friend Leena on the beach and there he hears a mysterious voice calling him, before being suddenly hit by a tsunami that knocks him unconscious. Upon awakening, he realizes that no one in his village recognizes him and to his surprise he discovers his own grave moments later. He soon learns that he actually crossed over into an alternate dimension where he drowned on the beach ten years earlier, and meets the thief. kidswhose purpose is to find the legendary frozen flame.

Then a repertoire of more than 40 characters help you on your adventure around the tropical archipelago. The nestwhere he tries to figure out the events of the other plane and how they connect to his own, while being challenged by the shadowy antagonist lynx in his goal of capturing him.

As expected, the areas to go through are extensive and with double effort for the plot. Players progress by controlling the protagonist through the world, either on foot or by boat. Navigation between sectors is handled by a world map, which represents the terrain to scale in an overview. On the ground you can see villages, open air places and dungeons, through which the player moves in three dimensions. Towns and forests are more realistically represented, where you can talk to residents to get items and services, solve puzzles and challenges, or encounter enemies.

Action here and there…

The combat system Chrono Cross It is based on a typical turn-based RPG, although with some innovative elements for its time. In addition to the classic commands such as attacking, defending or escaping, there is the option of Elements. These represent abilities distinguished by colors and their respective elements: blue for water and ice, red for fire and magma, yellow for earth and electricity, green for wind and plants, white for light, and black for darkness. These are opposed to each other (red with blue, yellow with green and white with black) and can only be used once per duel.

These properties are also reflected in each character’s unique techniques and their own affinity (ie, are they stronger or weaker than other elements).
These elements are equipped in a kind of lockers or drawers, the number of which expands as you progress. The available movements also depend on the basic attacks: each physical hit has a percentage of effectiveness in relation to its damage (less damage, less chance of missing) and hitting them allows you to reach a specific range of cells (the more difficult ones give more spaces per watch). Therefore, you have to think carefully about how to arm yourself, since not carrying a skills necessary can be lethal (especially when it comes to healing).

Read:  Artificial intelligence will be the dominant technology of the metaverse, not virtual reality, says Scott Galloway

Unlike other titles, the system of leveling it’s quite quirky. There are no levels as such, but each victory gives us an increase in stats and the bosses give us a star, which counts as a kind of general level for the group when joining. And in the face of a loss with all three members down, there is no other option but to recover from the last save…

Black or white, no gray

Something that acquires vital importance are the decisions that are made. For example, depending on how you progress, you can unlock different endings. But what is really relevant and that invites us to replay are its characters, since if the company of one in particular is accepted, there is another subject or creature that will not integrate our ensemble.

Also, if they are taken to the other world opposite where they are from, the characters react to their counterparts (if available). Many of them are key to crucial events in the story, with their characteristic personalities and ways of speaking.

The beginning of the dream

The other game included in this version is Radical Dreamerswhich was the prequel or inspiration of what would be Chrono Cross years later (launched only in Japan in 1996, four years before its successor). It is a graphic novel with clear role-playing elements, although in a totally narrative way, with Serge, kids Y maguile in his attempt to enter a mansion in search of the frozen flame and of lynx.

The story is told on the screen and the dialogues are shown, with options to choose from (in some cases you have to choose quickly, because the title itself pressures you to do so with events) and very retro 2D backgrounds.

To reach a more current audience, Square Enix introduced some modifications or adjustments for this combo. For example, 3D models have been converted to HD, artwork has been polished, music is higher quality (which was necessary for such an iconic soundtrack), enemy encounters can be turned off, combat can be automatic, there’s an option to toggle the text font between pixel or HD and an adjustable screen resolution, among others.

The only issue we encountered was some FPS drops at certain times, but not much else.

Chrono Cross: The Radical Dreamers Edition It is a good way to bring two classics to the youngest or for the most nostalgic to rediscover these products from Square Enix. Stories with charismatic characters, captivating and mysterious plots, in addition to the role-playing element present to the surface in one way (turn-based combat with a striking skill system) or another (more narrative). Details were added or polished so that each player can adapt to the reality they like best. And are you prepared to go through different worlds with the impact of each decision?