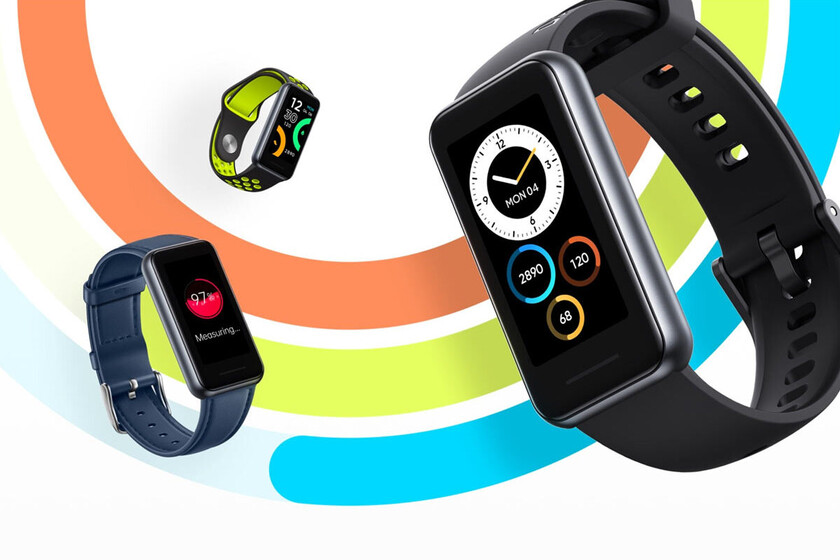 Realme has just announced the second generation of activity tracker, the Realme band 2. This new bracelet radically changes its design with a design halfway between a band and a smartwatch, in addition to receiving new functions.

The Realme Band 2 is an economic bracelet with a 1.4-inch screen with which you can record all your sports activity, analyze the quality of your sleep, stress, and blood oxygen level. All this with autonomy for 12 days and water resistance of 50 meters.

This is the Realme Band 2

Realme radically changes the design of its band on the Realme Band 2. Instead of merging with the strap, the Realme Band 2 has a rectangular design with rounded edges. It is something like a Huawei Watch Fit even more stretched out.

With this update the diagonal of the screen grows considerably, a 1.4-inch LCD panel with a resolution of 167 x 320 pixels. The display has considerable edges at the top and bottom.

As a good activity bracelet, we can use the Realme Band 2 to record all our sports sessions. Recognizes 90 different sports, although some of them will arrive later through an update. Of course, you can also use it to record your pulse during exercises or continuously.

READ:  This is how the S Pen has evolved over time

The sleep analysis is not missing and the measurement of blood oxygen or SpO2, which can also be continuous. In addition, you can also use the Realme Band 2 to record your stress, do breathing exercises, keep track of the menstrual cycle.

As is often the case with similar devices, the Realme Band 2 will keep you up to date with mobile notifications, as well as being able to use it to see the weather, such as remote trigger, control music, to find the phone or with more typical clock functions: alarm, stopwatch and timer.

With 50 meter water resistance and Bluetooth 5.1 connectivity, the Realme Band 2 is compatible with Android 5.1 and iOS 11 or higher. Its 204 mAh capacity battery represents a typical duration of 12 days.

The Realme Band 2 is official at the moment in Malaysia, where it can be purchased for 169 ringits, which are 34 euros to change current. At the moment we have no information on whether it will be sold in other regions.