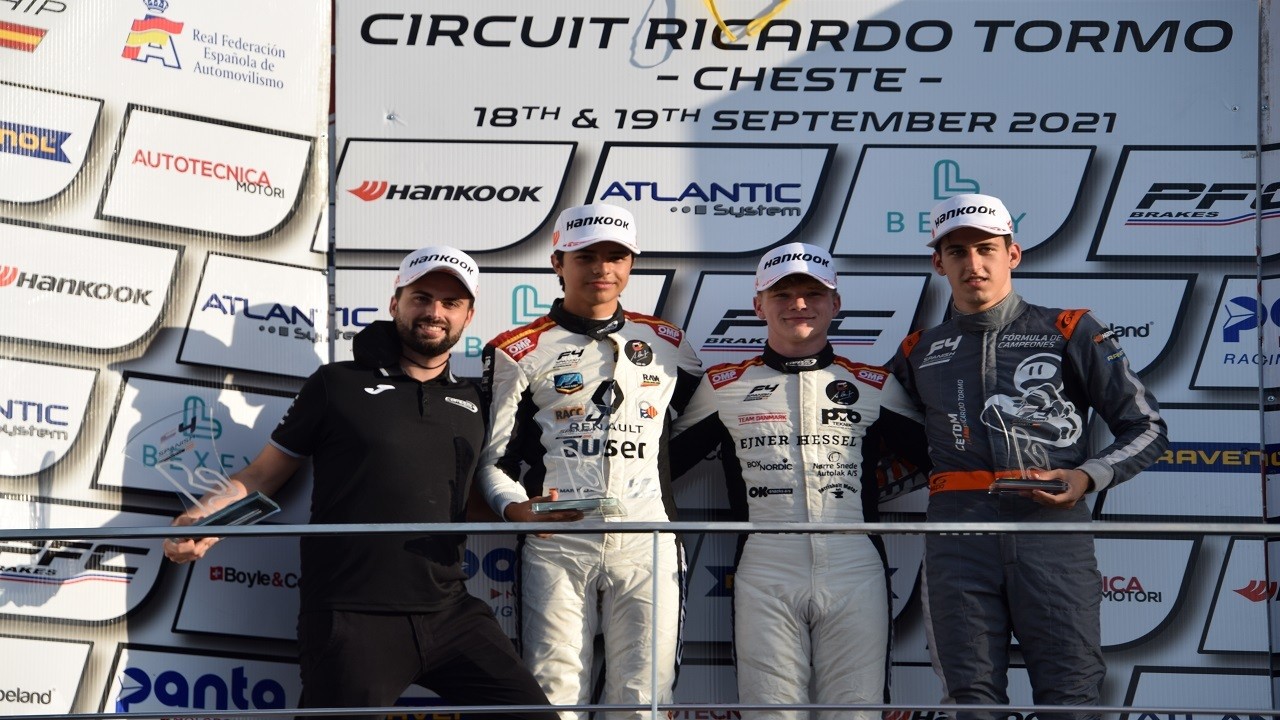 The Circuit de la Comunitat Valenciana Ricardo Tormo de Cheste celebrated its twenty-second birthday with the Racing Weekend, the format of the Royal Spanish Automobile Federation that brings together Formula 4, the Spanish Touring Car Championship and TCR, the Spanish Championship of Resistencia and, this time, also the Renault Clio Cup.

With a allowed capacity of 4,000 people that was completedThe most interesting race was the Spanish Formula 4, and a full program of activity on the track, a true nursery of the future that enjoys increasing internationalization. Proof of this is that the rookie but solid leader of the competition, Dilano Van’t Hoof, is Dutch. He could just win the title this weekend.

In the Saturday’s first race, in a day of suffocating heat, the Dutchman started from pole, but his clutch slipped and he did not have a good start, being overcome by the Campos of the Danish Sebastian Ogaard, his chaser in the championship. From the lead, he began to take some distance from Van’t Hoof. One incident caused a short safety car, after which chaos broke out for the championship leader.

Because when the race resumes, Daniel Maciá overtook Van’t Hoof who, at the Doohan corner, over-braked, breaking his front wing and puncturing the rear wheel of the Circuit’s Formula de Campeones pilot, which made Pepe Martí, with another Campos, placed second. The accident victims went through the pits, but they would not make it to the points.

In that way, Sebastian Ogaard got his third win of the year, leading an emotional double for the Campos Racing team on the land circuit of the longed-for Valencian driver, who had previously been paid tribute in his sculpture at the entrance of the circuit. In third position came Quique Bordás, from the Circuit team, but due to a penalty for exceeding the track limits, the last step of the podium went to the Russian Marsim Arkhangelskii, who thus achieved the first podium of the year for him.

That Saturday the first CET race, who saw the victory of the German Mike Halder in his Honda Civic, in the TCR category, dominating with authority over Alejandro Cutillas and his sister Michelle Halder, both very fast brothers. For his part, Félix Aparicio won the CET category with Iván Velasco and Luis Barrios on the podium. In the Clio Cup, the victory in the first race went to the Frenchman Nicolas Milan, in a race in which the track limits and penalties were the protagonists.

On Sunday, September 19, 1999, the Ricardo Tormo, perhaps in homage to whom it is named, hosted its premiere in the MotoGP World Championship with torrential rain. Nevertheless, 22 years later the sun kept shining although with less force than the day before. It was the main day of the program, with a multitude of races, including the Spanish Endurance Championship, with some spectacular GTs.

Focusing on F4, the second race it was absolutely vibrant. Again Van’t Hoof started on pole –very fast and very fine the Dutchman on one lap-, and this time he kept it. However, he was unable to escape from his pursuers, Ogaard and Maciá, and it would be in the final stages of the test when absolutely madness broke out among the leading quartet, with the Dutch Rik Koen. The Dane from Campos Racing had dominated, but first Van’t Hoof and then Maciá overtook him.

But the best came in the last two laps, with a spectacular overtaking three of Maciá on the finish line, touching the grass, to become a leader. However, in the following curves the track limits were violated several times and although Maciá crossed first, he had to give the victory to Van’t Hoof, the sixth of the year for him, with Koen third and Ogaard fourth.

The last race was held a few hours later. Again Van’t Hoof on pole failed to start, and was overtaken by Serbian Filip Jenic and Sebastian Ogaard, who thus made up the leading trio. With all of them very compacted, Daniel Maciá had an exit from the track that forced the safety car to exit for a couple of laps. When the race resumed, Ogaard did not miss the opportunity and passed Jenic in the second corner of the Cheste, and opened a slight gap.

The fight was then for Van’t Hoof, who found himself with a tough rival for second place, whom he could only overtake with a nice maneuver in the last laps: he feigned in the first corner forcing the Serbian to defend himself, he pulled better, and when he reached the second corner he had taken second place. He tried to get closer to Ogaard, his great rival for the title, but it was not possible and Campos closed the weekend with another victory, closing the gap with Van’t Hoof in the championship, who leads with 265 points to the Danish’s 172. There are six races left in the championship, but if Dilano Van’t Hoof manages to increase the lead by 23 more points in Jerez, the venue for the next three, he will be mathematically champion.

At CET, the excitement was also intense in the second race, where a vibrant final duel between Alejandro Cutillas in his Peugeot 308 and Mike Hadler in his Honda caused that the winner was not decided until the last corner, which was finally the Spaniard, who had started on pole. The German, who dominated the race, had suffered a slow puncture that allowed the Spaniard to end up approaching and finding a hole.

The third and last race of the CET saw a women’s double on the podium, with the resounding victory of Michelle Hadler, the second for the German this season, which climbs her to the fifth position of the championship, which is led by her brother. In second place came Alba Cano, in a great comeback to second place, which she had to defend to the finish line against Alejandro Cutillas. Mike Hadler, who had led from the start, was delayed by a technical problem in his Honda.

For its part, the CER contested its two races, the first won by the spectacular Mercedes SLS AMG of Eduardo Costabal and Daniel Diaz-Varela while the second saw the triumph of the brothers Arnau and Olivier Gómez at the controls of their Vortex, in a duel with the Mercedes. In the Clio Cup, victory was again for Frenchman Nicolas Milan.