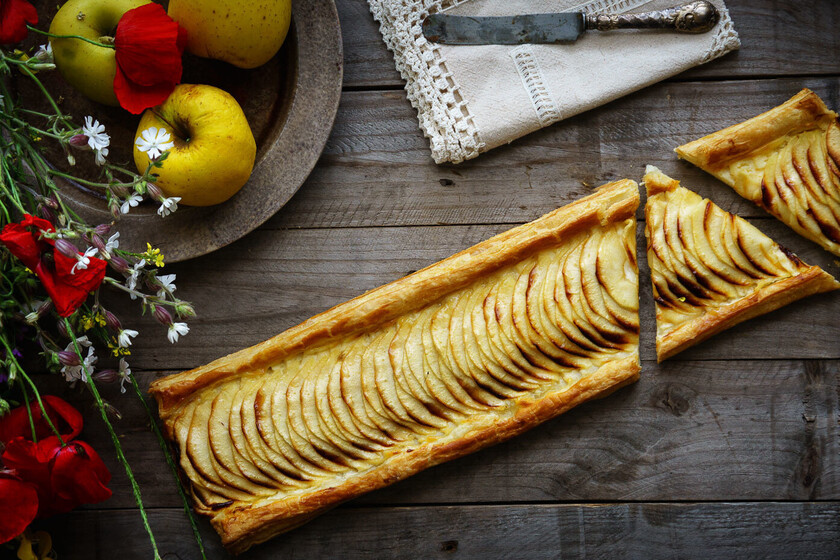 We will start preparing the filling. For the cream, in a bowl we mix the sugar with the cornstarch, add a little milk, the yolks and beat with some rods until we see no lumps. In a saucepan, add the rest of the milk, the cream and the vanilla, heat until it starts to boil.

We will cut the apples into quarters and then finely sliced. We reserve by sprinkling them with a little lemon juice.

We spread the puff pastry and cut a band about 15 centimeters wide, as well as two strips two centimeters wide and the same length as the band. We beat the egg and with a brush we paste the flaky strips, one on each side of the band. We preheat the oven to 200 degrees.

In a pastry bag we add the cream filling the space between the sides of the puff pastry. We place the apple slices in an orderly way. We bake for 30 minutes at 180 degrees or until we see the cooked puff pastry and the toasted apple.

Once out of the oven we paint, if you like, with glitter gel for cakes, homemade, here you have the recipe, or commercial.

Read:  "For a Mallorcan, a pig is a sobrasada that walks"

chocolate cake recipe, classic French pastry, that will make you fly to Paris

recipe without oven and without added sugar

Reduced yogurt makers to make this healthy dessert and, incidentally, save in the shopping basket

Tolosa beans recipe with pork rib, the spoon dish that they will ask you for

What is Genshin Impact’s Hunters and Rebels game mode about?