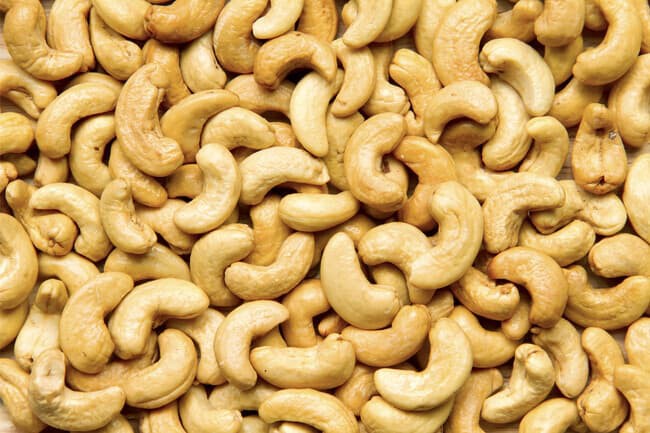 These nuts of Brazilian origin are, with good reason, the favorite of many fans to snack between meals. Either raw, fried, roasted or crushed inside a cream, cashew is really addictive. But, even though it is an abundant source of magnesium, should not go overboard with the recommended daily amount (about 15 units).

If you want to know all the secrets of this nice kidney shaped food, a close relative of the pistachio and mango, and learn how to integrate it into your preparations, read on. An absolute fan of the cashew nut in any of its variants tells you.

Index hide
1 A pseudofruit? What’s that?
2 What properties do they have? Where to sign?
3 How to use cashew in your recipes

If we go into technical mode, we have to talk about a compound fruit. On the one hand we have what is the true fruit, kidney-shaped, which we can find in any store or supermarket. But what many do not know is that the Anacardium occidentale has right on top a pseudofruit called cashew applewhich is nothing more than the thickening of the stem of the fruit.

In other words, what we call cashew is actually the seed From the tree. The germ is inside that nut and then there is the outer shell, with which you must have special be careful because it contains urushiol, a highly poisonous compound. Hence, there are those who say that they should not be eaten raw, although really raw they can only be eaten by those who are working on the plantations (even what is sold as raw is not).

Its discovery we owe, once again, to the Portuguese colonizers who took advantage of their stay in Brazil to, seduced by its nutritional properties, export it to India and, later, to some countries on the African continent. And the name is not wasted either. It was a French monk and naturalist named André Theve who, thinking that it was in the shape of an inverted heartdecided to baptize it like this (“ana” means “up” and “cardium”, “heart”).

We are pleased to inform you that this dried fruit that you like so much also it is beneficial for health (WHO recommends its consumption). Its magnificent composition provides a series of nutritional values ​​to be taken into account.

For starters, both the monounsaturated and polyunsaturated fatty acids found in cashews help decreased LDL cholesterol levels (the bad) and triglycerides, which leads us to think that people who consume them are more exempt from suffering from cardiovascular diseases such as heart attacks or strokes.

On the other hand, despite their high fat content, they can be a perfect ally in our diet if we want to lose some weight, since they have a high fiber content, healthy fats and proteins that increase the feeling of satiety and this makes us not feel the temptation to consume other ultra-processed and more caloric foods. So that thing about nuts being fattening has to be taken with tweezers, what is true is that should not abuse them (25 grams daily is a good measure).

Read:  What is lactose-free milk and what benefits and contraindications does it have?

But let’s go back to the properties of this food rich in minerals such as magnesium and copper (basic in relation to tissue regeneration and the correct functioning of the immune system). Also, and finally, it is rich in tryptophan, which is one of the essential amino acids precursor of the neurotransmitters serotonin and melatonin and of vitamin B3 or niacin (responsible for improving our mood and guaranteeing a better rest).

How to use cashew in your recipes

We come to your favorite part to discover what can be done with a cashew in the kitchenbeyond adding it to give it a touch crunchy to your salads or eat it in handfuls as if they were sunflower seeds. The possibilities are many, since it can be used both raw and fried, toasted or mashed into a cream.

For example, a highly recommended travel recipe is the Sri Lankan Cashew Curry, which will allow you to travel far without leaving the sofa. Also in this line, you could liven up with the Cashew and Chipotle Chile Dip.

Sweet lovers are also in luck if they find cashews at home, since with them you can make a Cashew Butter that you can use in many cake and pie recipes. Or this Coconut and Cashew Nut Cake that will surprise you with its originality.

If you are looking instead for a recipe healthy To the best of our ability, we propose a garnish in the form of Broccoli with mango sauce and cashew nuts. And before we say goodbye, so you don’t complain, we give you a very simple recipe that will help you lose your fear of cooking with cashews. Of course, once you have it ready (it will take you half an hour at most), remember the recommended daily amount because then there is no going back.

Preheat the oven at 125º C with a fan and prepare a suitable tray or source, covering it with non-stick parchment paper. Arrange the raw cashews in a bowl or deep plate.

Besides, beat with a fork or a few small rods the hot sauce, honey, olive oil and paprika. If it’s too thick, add a light splash of water or more oil.

Pour over cashews, add a taste of salt and stir well. Pour over the tray, trying to add all the remains of the dressing with a spatula, and spread in a single layer.

Bake for about 25 minutes, stirring halfway through to ensure more even cooking. They should be dark and golden, tan and shiny, but not crispy. Let cool before removing from the tray and serve with a little salt on top.

In DAP | Walnuts in the kitchen, the nut rich in healthy fats: properties, benefits and how to take advantage of them with five recipes