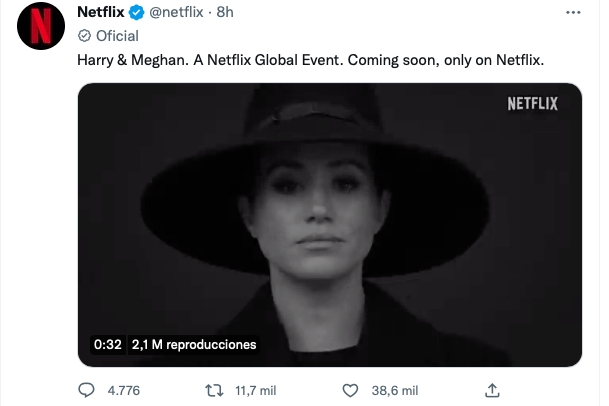 This year the British royal family has been in the public eye, and not only because of the death of the Queen Elizabeth II, but also for all the steps that Prince Harry and his wife Meghan Markle have taken, who surprised everyone this Thursday by revealing the trailer for their documentary for Netflix.

After his departure from the monarchy, the couple began a new chapter, but according to Celebrity Networth the multiple businesses have achieved add 10 million euros to his account since last March, reaching 60 million dollars in assets.

It should be remembered that Harry and Meghan signed a million-dollar agreement with Netflix, a contract that the US media have estimated at a figure of more than 100 million dollars and that has given them the opportunity to create different content through their production company and show it to the public. world.

In addition, they have signed another agreement with Spotify for 18 million euros to carry out podcasting productions.

This Thursday the couple made up of Prince Harry and Meghan Markle has gone viral and all for revealing the trailer for the Netflix documentary series of the Duke and Duchess of Sussex.

In the small preview that the streaming platform released, it can be seen in black and white for a minute and begins with a voice asking the couple: “Why did you want to make this documentary?”

The voice fades out and the sneak peek proceeds to show dramatically quick flashes of photos of the royal couple, looking up at him adoringly.

Read:  the death of the professor and six other things we need to see before the definitive end of the Netflix series

Also included in the photo album is a photo of the former actress, 41, showing off her pregnant belly, and Harry, 38, playing the guitar.

“No one sees what happens behind closed doors”, Harry narrated from behind a snapshot of Markle looking distraught. Another scene shows her sobbing sitting on a chair. A photo of the former Fab Four is shown: Prince William, Kate Middleton, Markle and Harry.

Also shown is the famous photo of the “Suits” star shedding a tear at Queen Elizabeth’s funeral in September.

The Invictus Games founder, in color, is then seen sitting down with an interviewer and ominously saying, “I had to do everything I could to protect my family.”

In the short video, you can also see a mix of baby photos of Harry and Markle when they were young. “When the stakes are so high, doesn’t it make more sense to hear our story from us?”

According to an article in Harper’s Bazaar, the documentary series will be available on Netflix on December 8, and will share the catalog with other streaming hits, such as the new Merlina Addams series. Also with the fifth season of The Crown, the series that tells the story of the royal family, where Harry has the fictional version of him.

And this is how Netflix continues to bet on new content that causes controversy worldwide to increase its numbers worldwide and once again dominate the streaming market.