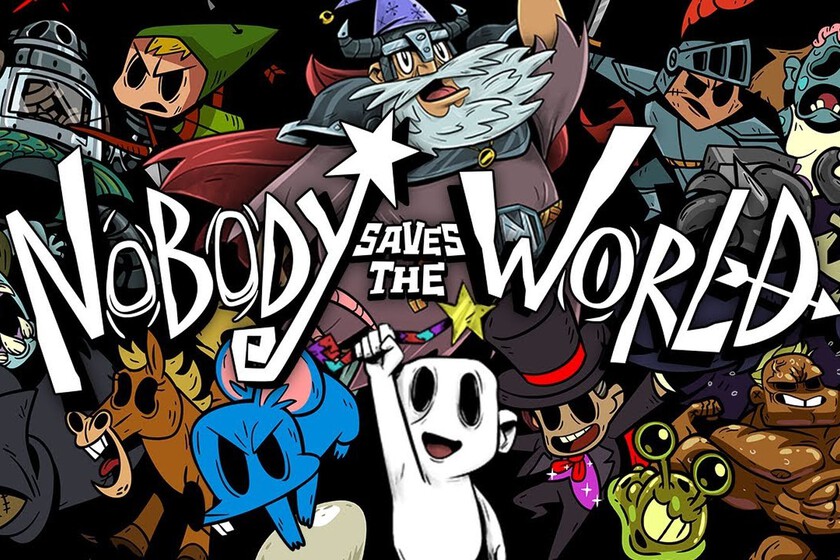 It is frankly difficult to be constant, especially when that constancy means create high-quality products. But it is just what the Canadian study has been doing DrinkBox since its founding in 2008: they don’t know how to play bad games. All they develop is original and fun, as shown by the sequels of Tales from Space and Guacamelee !, without forgetting the fantastic dungeon-crawler Severed, one of the best video games to come out of the PlayStation Vita.

His next work is called Nobody Saves the World and its launch is just around the corner, with the added incentive of knowing that it will come standard with Xbox Game Pass. And after playing his demo for several hours, we will tell you what we thought, although you can already imagine the result: another colorful wonder 100% DrinkBox.

The power of transformations (almost) without limits

How could it be otherwise, we are not facing the typical action adventure game with slight doses of RPG and touches of roguelike at specific points on the map. Well, from the outset it is already difficult to classify it, so you can see it by playing several suits. Its external world is fixed, for example, while the dungeons do change their design every time we enter like any other roguelike.

But the grace of Nobody Saves the World lies in its transformations. Specifically, that ability to mutate into other beings on the part of the protagonist, a totally pale and almost soulless character, except for that curious ability.

The full version will have around 15 different transformations, seeing in its demo a good first contact when going from rat to horse, archer, knight or even a slug. Yes, for the protagonist it does not matter human or animal, who transforms instantly … as soon as he has unlocked said being based on some objectives. Because the process follows rules that must be strictly adhered to.

It is part of the success of Nobody Saves the World. This progression that serves both to know the standard attacks and special abilities of each being, at the same time that we are perfecting them by fulfilling a series of tasks until access to more transformations are enabled. For example, for the slug it takes the archer to reach rank C. And that means going up a couple of levels.

Each new transformation part of the F level and to reach the next one (D) with a couple of objectives of the being in question it will be enough. Here there is no experience bar by the traditional method, but it is precisely delimited by the character objectives … but both for each creature, as well as globally for the main protagonist. And this stings us to do those tasks.

A good example of this would be the slug, capable of slowing down and causing critics on the enemy that has stepped on the viscous substance that it releases when walking. A priori, he does not seem like a powerful enemy due to his slow movements and how long it takes to start shooting, but at higher levels he is a tough character to crack that wins integers if we spend tokens upgrade for each skill.

The diverse universe of Nobody Saves the World

If from the outset it draws attention to that ability to transform into different beings, each one more opposite (power, speed, appearance …), it takes little time to make sense of the wide range of possibilities that opens this ability: there are areas of the map that we can only access with a specific being, either to enable an entrance or sneak through a narrow hole. And although the demo is limited to a few characters, in the full version we will not be able to take them all at once inside the transformation wheel (for quick access, let’s go), so we will have to draw a tactic when entering the dungeons .

In fact, this “fan” reaches its zenith when it sees a difference between each being: the different types of attack available to it. Or rather, the effect they have. And it is that in the last dungeon we will run into enemies invulnerable to certain types of attack. That they cannot be damaged with cuts? Then the knight will have to use his blow to the ground. What suffer with the dark type? Then the rat poison will come in handy. Because that’s when Nobody Saves the World shows its true weapons, by forcing us to quickly and constantly exchange between each being based on the type of attack.

What’s more, under that unmistakable DrinkBox touch, with such a palpable style of humor and quite striking visuals, like all his productions to date. I can only put one downside for now and it is when directing the attacks, for being somewhat rustic and rigid: four directions and without the option to use the second stick for greater maneuverability. The latter is partially offset by setting the position in two different ways by holding down the attack button or the trigger. But it is still strange when controlling the horse, for example … especially seeing that its attacks are backwards with its hind legs.

Each character forces us to change the chip, which is a point in its favor. It is as if in the Diablo on duty we had to forcibly alternate between all its characters, a bit in the vein of the wonderful Children of Morta, except that in Nobody Saves the World The change occurs constantly in advanced level combat or when exploring the map, since there is no lack of its secrets, like fairies that expand our magic cap, among other types of curiosities.

In a week it will be released for PC, Xbox Series and Xbox One, with the already exposed incentive of Xbox Game Pass. So there will be time to get lost and see it more thoroughly. But for now the sensations are very positive, especially because of how original and colorful each and every one of his transformations are.