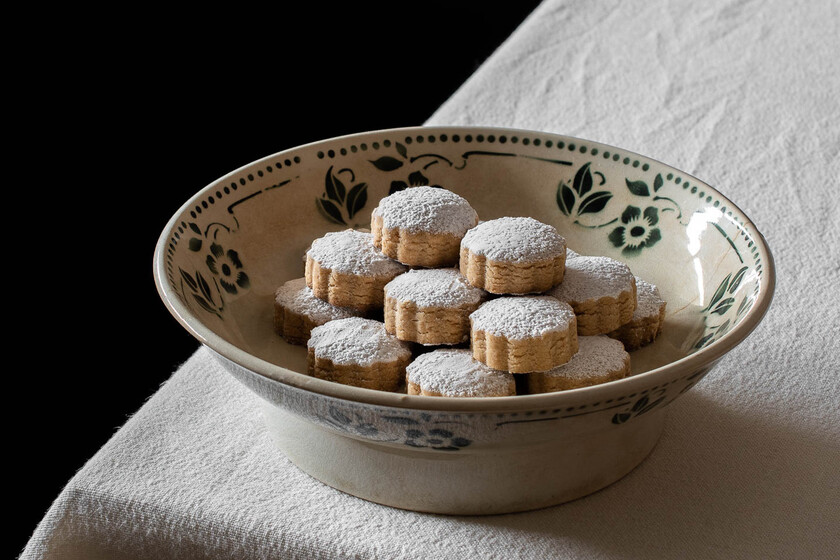 We toast the flour, which is the main characteristic of polvorones. To do this we spread it on a baking tray and bake it at 180 ºC, oven preheated with heat up and down, for about 15 minutes or until you see lightly toasted. We remove the tray from the oven, stir and let cool.

We do the same operation with the ground almond, but baking it between eight and ten minutes, just enough so that take some color. We remove the tray from the oven and let it cool.

When the flour be cold We sift it and place it in a wide and deep container. Add the ground almonds, the icing sugar, a pinch of ground cinnamon, another pinch of salt and the butter at room temperature. We stir and mix until obtaining a homogeneous mass.

We wrap the dough in plastic wrap and leave it rest in the fridge for at least half an hour. After the resting time, we spread the dough on a sheet of greaseproof paper. The thickness varies according to taste, but ideally it should be between 1-1 1/2 centimeters.

With a round pasta cutter we cut the dough. If we use a small one, more units and polvorones will come out, which is how we like them. We place them on a baking tray with greaseproof paper or a silicone mat.

We put the tray in the oven, preheated to 210 ºC with heat up and down, and cook for about ten minutes. You have to watch them so that do not over-roast because they bitter. We remove them as soon as we see that the edges begin to toast.

We remove the tray from the oven and let the polvorones cool down before sprinkle with icing sugar and pass them, with great care, to a serving platter or wrap them in their characteristic little paper.

the advantage of being the first in a conversation about CBDC, from January 10 to 17