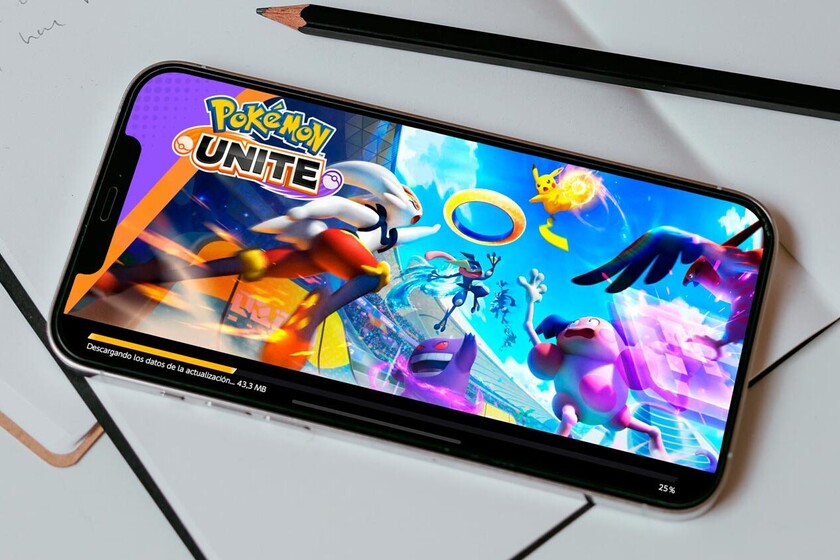 Months after being available for Nintendo Switch, and after the good reviews generated on the console, Pokémon Unite finally reaches mobile phones. And we have already tried it: the game seamlessly transfers Pokémon 5v5 battles to touchscreens with ten minute games where almost anything can happen.

MOBA-type games, titles where you have to fight in a closed space against other players online, have long been gaining followers thanks to the popularization of franchises such as League of Legends. Its mechanics are simple: two opposing teams of five players each where you have to win matches to beat your rival in points. LoL is very popular on computers, also on mobiles. And there is a game that can steal great prominence after landing on smartphones.

Index hide
1 Pokémon Unite, the expected Pokémon MOBA now available
2 Pokemon Unite
3 Simple controls well adapted to touchscreens
4 Good graphics, high-quality animations and Pokémon everywhere
5 Gameplay: every game takes place in a heartbeat
6 One of the best games of its kind, there is no doubt

The developers of Pokémon Unite, Tencent’s Chinese studio, had been testing the game on mobile phones for some time after the announcement that Nintendo would enable the title on both the Switch and smartphones. Until now, some internal tests had been developed in order to global launch on Android and iPhone. Now that time has come.

The Pokémon Unite servers are available globally from 9:00 am in Spain. The game is free, no ads, can be downloaded directly from Google Play and App Store, requires an account to play online and little else: the learning curve is easy, even for someone not experienced in Pokémon.

First things first: to try it first, you have to download it. Below are the direct links to the respective mobile stores. Once downloaded on the mobile, it is time to play the test: how is Pokémon Unite on mobile? The coastal answer would be “Lives up to expectations“. For the long answer you have to keep reading.

The arena or stadium is a large virtual area with two main routes: the lower and the upper. As in titles like LoL, not only the fight and the chosen characters prevail, the strategy is also important. Both the one that is planned at the beginning of each game and the one that arises when the combats develop: adapting to the skill of rivals is paramount.

Each side starts the game at one end of the stadium, it is also there where the Pokémon will “respawn” when they run out of energy. Once the ten minutes have started, you have to go through the arena defeating the wild Pokémon and the opponents. With each victory you get Æos, the points that will later go up to the team’s scoreboard. In order for them to go up, they must be marked: you have to go to the basket, located on the pitch, and keep the button pressed until the Æos are added.

As in any team game, the game is won by the one with the most Æos points on their scoreboard. And it is not an easy task, especially at the beginning: Fighting can get messy if you don’t have much experience in MOBA. In fact, Pokémon Unite is overwhelming at first, a feeling that soon disappears.

Cross the battlefield looking for opponents, fight against them to win Æos, score them on the scoreboard, dodge the attacks as much as possible, relive life in a team base and, how could it be less, Pokémon will also evolve during battles; which will increase your capabilities. And they will gain progressively more powerful attack moves.

The simplicity of the controls, with each button marked for the respective attacks, makes playing Pokémon Unite a matter of overcoming the first learning games. It doesn’t take long to master the games, gain experience, and level up, both to Pokémon and trainers. This progression is welcome, especially in the case of less experienced players.

The learning curve is not very steep: it is possible to gain quick experience even without having played a MOBA before

Choosing the line-up for each game is vital, not in vain the strategy tends to tip the balance in victory. Like in any other Pokémon game, each creature has a different balance; that can be defensive, offensive, can prioritize agility or offer balance in all key characteristics. Studying the lineup is a good starting point, at least when the trainer accumulates a certain number of Pokémon licenses.

Read:  the "Guitar Hero" from the creators of 'Clash Royale' comes to iPhone and Android

Respawn in process by KO

Having a wide selection of Pokémon within reach of the virtual controller is already great news. Obviously, Pokémon Unite doesn’t stop there: the graphics that the mobile title squanders are at the level of those of the console. And they perfectly accompany each game, both for the information on the screen (sometimes it becomes excessive) and for the details of characters and attack animations.

Advancing through the arena implies facing any other Pokémon, both wild and enemy. For attacks, the interface adds different buttons on the right side of the screen: each one triggers an action; that needs a certain recharge time (apart from the generic attack button, less powerful and always available). The animations and light effects that accompany the movements are impressive.

The Pokémon are well detailed, maintain the evolutions and their appearance is built in 3D with great quality. Fluid movements on the screen, well differentiated in terms of qualities, sounds maintain the charisma of each Pokémon and the melodies accompany the games without clashing (they can be somewhat heavy).

Pokémon Unite has good graphics, but you don’t need a very powerful mobile to play it

The graphics are not the most important thing in Pokémon Unite since fun, playability and strategy prevail in the game. Even so, it is very accomplished visually, at least as expected for a title in its category. With an advantage: you don’t need a particularly powerful mobile to enjoy 100% of its possibilities.

Gameplay: every game takes place in a heartbeat

It does not matter that the game has great graphics, that the characters are charismatic or that it has a huge variety of attacks: if you don’t keep the balance between fighting, planning, challenges and the progression of the experience in the end the gameplay ends up falling. It is not the case.

Pokémon Unite is perfect for playing a more or less quick game while waiting for the bus, taking a break from work, or during that little time of death where boredom tends to triumph. Ten minutes does not seem like much, but the truth is that pass in seconds thanks to how well balanced the game is. And because of how fun it is, of course.

Search for enemies, counterattack, cross the arena to score goals, communicate with other players in real time, evolve Pokémon for more powerful attacks… And all without Pokémon Unite putting excessive pressure on purchases: evolution without access to micropayments is not only adequate, it also intensifies the feeling of constant challenge in the game.

Æos Gems can be purchased for real money

Pokémon Unite amuses both those who have experience with MOBA-type games and those who are not used to playing multiplayer games online.

In addition, and since Nintendo has made the title a platform, It is not difficult to find players to play games withJust log in to find one available in seconds. At least for now.

Yes, it has micropayments, like almost any free mobile game. Even so, the purchases are basically for Acquire items and clothing for the trainer and to earn Pokémon licenses more quickly. With a little practice, and time, the list of available creatures grows even without paying a euro.

One of the best games of its kind, there is no doubt

It has been slow to make the leap to mobiles, but welcome: Pokémon Unite ascends in its own right to the podium of the best mobile games of 2021. The developers have not only taken the opportunity to extend the tentacles of the Pokémon universe, in the process they created a subscription title to become a timeless classic.

Since the games are online, the strategy to choose, and how the fights are triggered, will always be different. The difficulty curve is adequate, so it doesn’t take too long to get the most out of the experience. Of course, the difficulty can be high in confrontations with experienced players.

As we said, this new game from Nintendo, The Pokémon Company and Tencent has all the numbers to become a mobile classic. And from the console, that multiplatform games are active. Pokémon Unite will surely become one of the most downloaded games on mobile stores. And on its own merits.