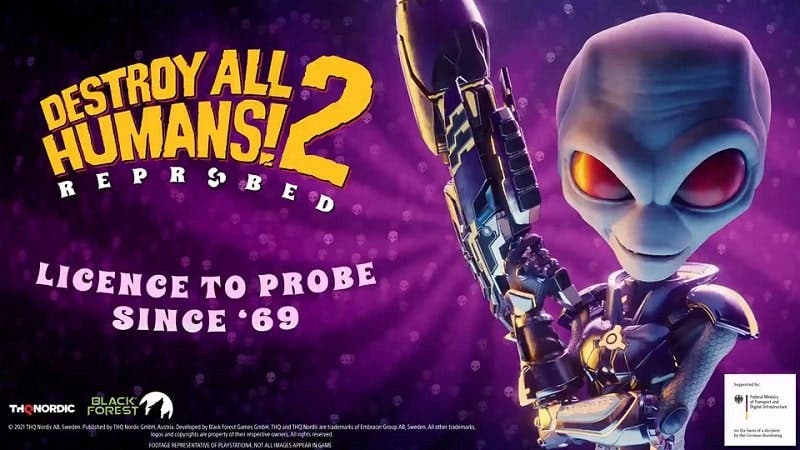 In the past month of August 2020 we were able to return to the world of Destroy All Humans with a new version of the totally improved cult classic title for Xbox One and without an upgraded version for Xbox Series X | S. In this spectacular remake we once again put ourselves in the shoes of the alien Crypto-137 while terrorizing the Earthlings of the 50s, collecting their DNA and overthrowing the US Government. wanting more, you are in luck, since PlayStation has leaked the remake of Destroy All Humans 2 Reprobed.

As many of you will remember, the Destroy All Humans 2 remake revealed in a way by THQ Nordic herself in one of the trailer for the Destroy All Humans! remake. At the end of the video we saw a second Crypto appear behind the protagonist, asking him if he has finished. A clear nod to the remake of the second installment that has now been leaked by PlayStation.

Destroy All Humans! – Xbox One

Through the official account of PlayStation via Twitter, the announcement of Destroy All Humans 2 Reprobed has been revealed in the company of a trailer. Said tweet has been deleted, so either way or unintentionally, PlayStation has leaked the remake of the second installment of Destroy All Humans, which we do not know if it will have a temporary exclusive release on PS5.

The trailer shows some of the gameplay from the 1969-based game, including psychedelic hippies and Russian spies from the Cold War era. It also shows off a new weapon and pair of glasses that set off a colorful explosion around Crypto, forcing people to dance. You can check this and more below, since we have been able to get hold of the trailer for the Destroy All Humans 2 Reprobed remake that has been shared by the Idle Sloth conodier via Twitter.

What it costs to change the battery to any MacBook