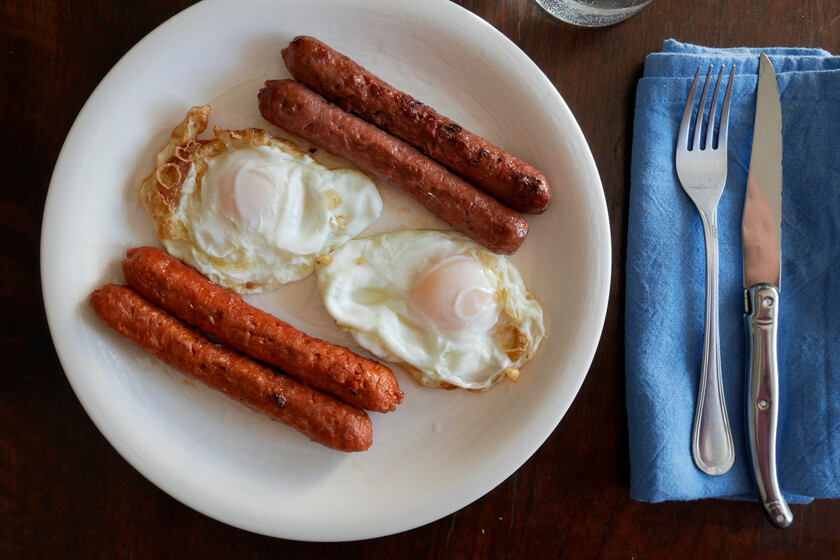 In just a couple of years we have become accustomed to plant-based alternatives to meat, almost without realizing how revolutionaries which these products result.

Political, nutritional and economic issues aside, the truth is that no one could have imagined that, overnight, plant products would arrive in our supermarkets that imitate meat in such a way that, without knowing what we are eating, we would never say that they do not carry a gram of animal protein.

So, we have tried several hamburgers, chicken substitutes, bacon, pizzas and all kinds of dairy products (which do not stop improving). Almost every month there are new releases. And it was a matter of time before one of the fetish products of every carnivore arrived: the chorizo.

Last September, the Catalan company Heura announced the launch of its two new products in the old bullring of Barcelona, ​​the Monumental: vegan sausages and chorizo. For logistical reasons, the sausages went on sale right away, but the chorizo ​​did not begin to be distributed until this year, coinciding, they explain from the brand, with San Antón: patron saint of animals and, also, the day they were traditionally made pig slaughter.

Marc Coloma and Bernat Ananos, founders of Heura, during the presentation of their new products.

What are they made of

As usual in many of these products, both the chorizo ​​and the sausages they are distributed frozen. They must be cooked in a pan for six minutes to be ready.

At first glance, it is clear that we are facing a ultra-processed product, something that its ingredients also attest to. The main protein that Heura works with is pea protein, which is, after water, the main element in both sausages and chorizo.

To refine the flavor, both products have a long list of additives and conventional aromas and, in addition, shea oil, a very rare ingredient to date in the food industry that comes from the berries of the tree of the same name, native to Africa.

“It is a vegetable fat, which in our case we decided to use since within the fats of vegetable origin it is the one that best imitates the juiciness and smoothness than an animal fat, but with the added value of being nutritionally better even when compared to other vegetable fats such as coconut fat, one of the most commonly used fats to formulate this type of product that wants to imitate the sensory animal meat”, he explains. Elena Moya, R&D Project Manager at Heura. “In fact, shea oil has 43.5% less saturated fat than coconut oil.”

If we compare them with the animal equivalents, according to their manufacturers, vegan sausage and chorizo ​​have a 40% less fat and saturated fats. Now, they are still ultra-processed foods that we should only consume occasionally.

Read:  How to subtract calories from your spoon dishes to eat lighter in this new year

After going through the frying pan, the truth is that both products have conventional sausage look, with a uniformity that betrays that, of course, we are not dealing with anything artisanal.

The texture, although less resistant than that of its meat counterparts, is very successful. As usually happens with these products, my impression is that it is a different type of meat than the one I am used to, but I’m still surprised it’s not meat. Although I have already tried many products of this type, the texture still seems totally alien to the plant world, even if it comes from a pea.

Regarding the taste, the same thing happens as in its equivalent made with animal protein: tastes like dressings what do you put on them The chorizo ​​is mild, but it is tasty and packs a punch, and the sausage, although it is much more spicy and has a different flavor than a conventional Franfurkt sausage, is not bad.

I still prefer a good chorizo ​​or a more or less homemade sausage, but they are better than many equivalent low-end meat preparations. And I’m sure that used as an ingredient or a component of other dishes –I can think of some macaroni with chorizo ​​or a hot dog with all its garnish–, where the texture is not so appreciated, it can give very good results.

As with all these types of products. plant-based, his target audiences it is the growing vegan or vegetarian population that wants to stop eating animals, but is not averse to eating products that remind them of this one. A totally logical thing, considering that, in most cases, people stop eating meat for political reasons, which have nothing to do with not liking it.

For the rest, it is difficult to find gastronomic satisfaction in these products that exceeds that provided by their meat equivalents. But they make sense if we want to reduce the amount of meat we consume and have a greater range of vegetable proteins to add to our dishes. substitutes plant-based they are getting better and better, their price is falling and they are here to stay.

have existed, but only at Burger King in Germany

this is the best trick

The Soria Torrezno Days bring the iconic bacon to a cheesecake, a cannelloni or a skewer with kimchi

This is how the Asturian cheese gamoneu del puerto is made, the most expensive cheese in Spain, of which there are only four producers...