By CooperOctober 2, 2022No Comments10 Mins Read 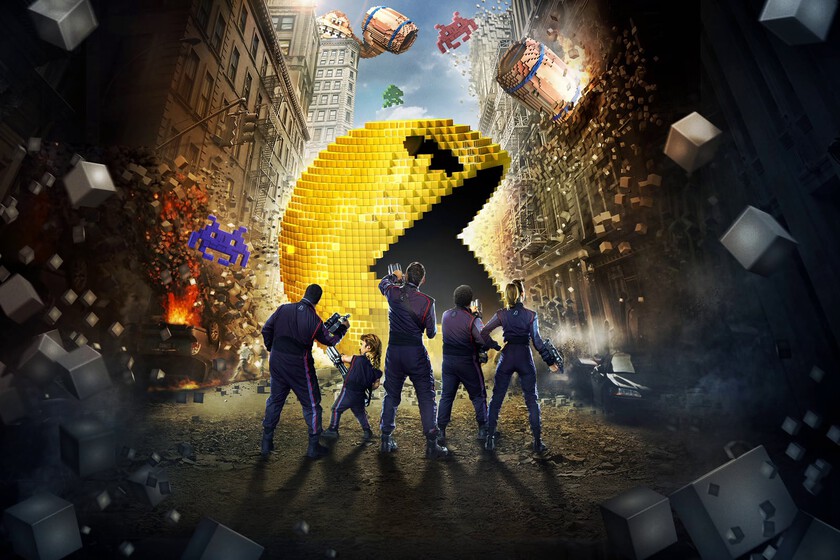 From the classic pixel to the modern voxel and from there to the big screen. On paper, Pixels had what it takes to be a celebration of the arcade legacy of Donkey Kong, Pac-Man, Q*bert, Centipede, and the arcade hits that obsessed an entire generation. pixels could be one bad parody of Independence Day produced by and starring the Adam Sandler of his least inspired stage. The reality is that being a parody is unintentional. A total disaster? About.

A year before the yellow fever of Pokémon Go crossed the barrier that separates video games from the real world, sony pictures He opted to combine the charm of the classics, the most trite premises of disaster movies and the same character that Sandler plays in half of the films he appears: the charismatic loser with a very special talent and answers for everything. Also, Chris Columbus, director of Home Alone or the first two Harry Potter movies, was at the helm. What could go wrong?

Unfortunately, pixels It is a visual show of lights and colors in which the truly interesting scenes, which exist, are diluted in an unnecessary accumulation of unfunny jokes and ideas recycled ad nauseam on the small and big screen. 106 minutes in which Sandler works in automatic mode in a film that does not find its own reason for being: it is too childish for those who remember the original games and the selection of classics hardly contributes anything to the new generations of video game enthusiasts.

Appear Mario on screen for about 10 seconds and in the background, yes, but the one from the classic arcade game Mario Bros. The cartridge that came to the NES without the “Super” in front of it.


Pixels is not a comprehensive nonsense. The direction of Chris Columbus saves the ballot of a script with the signature of Tim Herlihy, creator of several of Sandler’s best films (from Billy Madison to the lousy The Ridiculous 6, passing through the underrated Little Nicky or The Water Carrier) who also repeats with Sandler all the topics of his films. Including the not so subtle detail in which the first and last name of the protagonist’s romantic interest begin with the letter V and betrays from minute one that Violet van Patten it is meant to close the film with a final kiss without adding much to the plot.

Because pixels it taps into the charm of classic games, but actually offers little, very little to the viewer in the way of plot.

Now, as we mentioned, not everything in pixels it’s a meltdown. Columbus makes the key scenes of the film, the real-world, large-scale arcade games, truly shine on screen by combining live footage, super-large-scale voxel characters, and truly entertaining situations.

Borrowing too brazenly the basis and premise of the chapter Anthology of Interest II from Futurama and giving it the treatment of a Hollywood blockbuster. Because in pixels It’s the kind of comedy where you probably won’t laugh once, but its comedy scenes Pac Man either Donkey Kong They justify you staying until the end.

Index hide
1 Hollywood-style space invaders
2 An hour and a half remake of a great two minute idea
3 Pixels is not the worst movie based on a video game, but it is a missed opportunity

It is summer of 1982. Young Sam Brenner (later played by Adam Sandler) and Will Cooper (Kevin James) participated in an intense arcade game competition. Cooper had more skill with hook games than with Centipede either asteroids, but Brenner was out of this world: just by watching the game he could see the patterns of the game and take the initiative. What routine do ghosts have? Pac Man? How do the Martians move? Galaga?

The arrival to the final of the young Sam Brenner was assured, but there a hard nut to crack awaited him: Eddie “Thunderbolt” Plant (Peter Dinklage). A young man with plenty of attitude who, living up to his name, defeated him witheringly in the final. At least, as a consolation, that video game event and pioneer of current eSports was recorded, encapsulated and sent into space for posterity. What none of the three addicted to recreational suspected is that it will be the condemnation of the entire planet.

We are in 2015. Will Cooper is no longer the kid who borrowed the coin jar from his sister’s lemonade stand to go to the arcades: he is now the President of the United States. Of course, despite the fact that Sam Brenner is dedicated to installing televisions and video game consoles, he is still his best friend. He remains a world-class expert on classic video games, retro classics, which have very little to do with today’s. There are no longer patterns or lives are played, but impulses and infinite continuations. The world has definitely changed. And more that will change.

As the highest authority in the country, Cooper has been informed of a mysterious attack on one of the United States bases. The only clue you have is a trail that reminds you of the pixels of arcade video games and it doesn’t take long to reach a bizarre conclusion: that 1982 space probe in which a group of young people played Martians has been taken as a declaration of interplanetary war. A distant planet has begun the conquest of the Earth and its modus operandi is to ship real versions of retro video games.

The world is in danger and to combat this threat you don’t need war heroes, but true geeks of the arcade classics. Experts in Breakout, Space Invaders Y Pac Man. Luckily for humanity, Sam Brenner hasn’t lost touch with him.

Read:  Nintendo could be preparing its usual Direct on E3 dates, according to this leak

Pixels is an action comedy that is born from the same mold as most movies about supernatural catastrophes or alien invasions. He doesn’t have much else. The three hallmarks are the humor with which Adam Sandler and Kevin James spice up the less interesting moments, the cheeky character built for Peter Dinklage based on the also immodest Billy Mitchell, and the integration of arcade classics as a great threat to humanity. The last two only work on screen.

In fact, and to be fair, Sony Pictures Spain’s localization to the Spanish version does wonders for Sandler’s humor by translating and juggling his easy insults and jokes based on popular North American concepts and personalities.

Doing for the umpteenth time diamond in the rough destined, to no one’s surprise, to save the planet with its very president in the front line of combat. which is paradoxical, since Pixels was born from a French animated short.

On April 8, 2010, Pixels was released. Not the Chris Columbus movie, but a much more modest and original two-and-a-half-minute short whose premise was terribly simple, but its execution was brilliant: retro video games conquer the real world.

The story begins with a young man in New York. Putting an old television in the trash, his screen explodes and releases into the real world, like Pandora’s box, the characters and enemies of classic video games. A series of cute catastrophes with the exact measure of nostalgia.

space invaders take control of the streets and his little martians bombard the mythical yellow taxis. Pac Man he has conquered the subway tunnels as if they were the labyrinths of his games. Meanwhile, from the sky it begins to rain the iconic figures of the Tetris fitting into the skyscrapers of the city. Eliminating entire plants by fitting without free gaps.

Little by little, like a viral reaction, the real world ends up being infected by the spirit of classic games and ends up becoming in a scaled way a voxel, a three-dimensional pixel, in the middle of space. If you think about it enough it could be an allegory, although pixel, the 2010 short film is pure entertainment and retro spirit in a very small but successful dose. Nothing to do with the expanded remake of Sony Pictures.

Sony Pictures, or rather its Columbia Pictures division, became interested in the concept of the short film along with Sandler himself, who trusted Tim Herlihy to develop a script that he apparently did not initially like. After several changes, elements were introduced such as the involvement of the President of the United States and Chris Columbus, who met with Sandler for another project, saw the potential of the idea. Because he had it.

For its part, Sony has always had a very special disposition to bring video games to the big screen. Even before the creation of PlayStation Productions. He has been behind all the adaptations of Resident Evil, as well as Silent Hill and has also created original productions.

And we are not going to deny it, the shameless Product Placement of PS4, The Last of Us, Vaio computers or Xperia phones, among others, converts a percentage too much to consider Pixels in a commercial.

Pixels is not the worst movie based on a video game, but it is a missed opportunity

The brilliant career of Adam Sandler and Chris Columbus were not at their best in the middle of the last decade, and despite the fact that pixels came later, did not contribute to the streak of both.

The critics were withering with the film but, at least, it was not a great commercial debacle, of the 88 million dollars that it cost (according to IMDB) almost 245 million were collected worldwide. Its premiere in the US and Canada, yes, showed the predisposition for this curious mix of ideas with less than 25 million generated at the box office.

Pixels is a film that is not easy to recommend. It doesn’t work well either as a Sandler-style comedy, or as a romantic comedy – which it also intends to do – and much less as a disaster movie. In fact, everything that made the short by pixels of 2010 vanishes. Luckily, the production of the film does take advantage of this curious combination.

It must be recognized that the budget allocated to the special effects and the direction of Columbus manages to rescue the film with really interesting scenes including a crazy shootout in the United Kingdom inspired by games of Centipede or a very entertaining final act that fills the screen with icons from the video game while playing a fast-paced game of Donkey Kong to real scale.

Not to mention an ingenious game of Pac Man in which a titanic Pac-Man faces four minis that represent the ghosts of the arcade. And although homage is paid to Toru Iwatani, the creator of the video game, his role passes into the hands of an actor. Luckily, Pac-Man fans will recognize Iwatani with a discreet cameo appearance as an arcade repairman early in the film.

Pixels is not a good movieFar from it, but at least its essential scenes manage to be entertaining. On the way from the idea of ​​France to Hollywood, all the genius and genuine friendliness of the pixels 2010. Not for being more thankfully short and brilliantly simple, but for offering an original and cute premise in which classic video games go on a world conquest. A simple idea, but successful. And of course, The good thing if brief twice good.