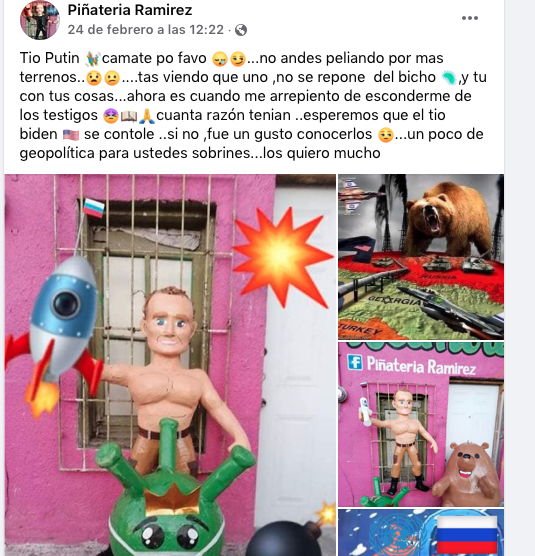 The marketing and advertising industry is closely linked to the trends that are created every day on issues that occur in the world in general. Brands often use this type of trend to create advertising campaigns for their products and services using channels such as social networks, as is the case with the popular Piñatería Ramírez that once again surprised everyone by creating a creative and fun piñata this time for Russian President Vladimir Putin.

In context to the war conflict that is currently being generated between Russia and Ukraine, following Putin’s orders to the Russian army to invade Ukrainian cities, has generated various messages of solidarity and rejection of war in the world. That is why many brands and companies have joined this trend by generating content on their social networks where they show their position in the face of these attacks.

According to data from various specialists, the creativity of an advertising campaign and marketing is one of the factors that determine your chances of success and to generate empathy in the public and consumers.

Read:  users will create their own mobile networks

Likewise, with data from the Research Department of Merca 2.0 in a study carried out on the impression that consumers have regarding the creativity of Mexican brands, they highlighted that “51.19 percent of those consulted consider that Mexican brands are creative because they generate good messages that motivate them to identify with them.”

That is why, despite the fact that this armed conflict that is currently taking place between Russia and Ukraine is a very sensitive issue in the worldthe creativity of brands can be very important to generate messages and content that reach people, generating awareness.

Using again the power of social networks, Piñatería Ramírez went on its Facebook account to share its creative design and also a powerful message where it rejects the acts of violence by the ruler of Russia against Ukraine.

The publication shows the piñata where the figure of Vladimir Putin shirtless and showing off his muscles and holding a syringe. It is also accompanied by the Covid-19 piñata and that of a bear.

The post is from Thursday, February 24, the date when this conflict began in Europe and It already registers more than 3.2 thousand interactions and comments of the digital pulse.

“Uncle Piñata always updated”reads one of the comments.

Once again this Mexican brand has won the hearts of Internet users and consumers for their creativity and ingenuity in creating their products with the themes found on the table.

They sue Meghan Markle; How does it affect the image of the Duchess of Sussex?