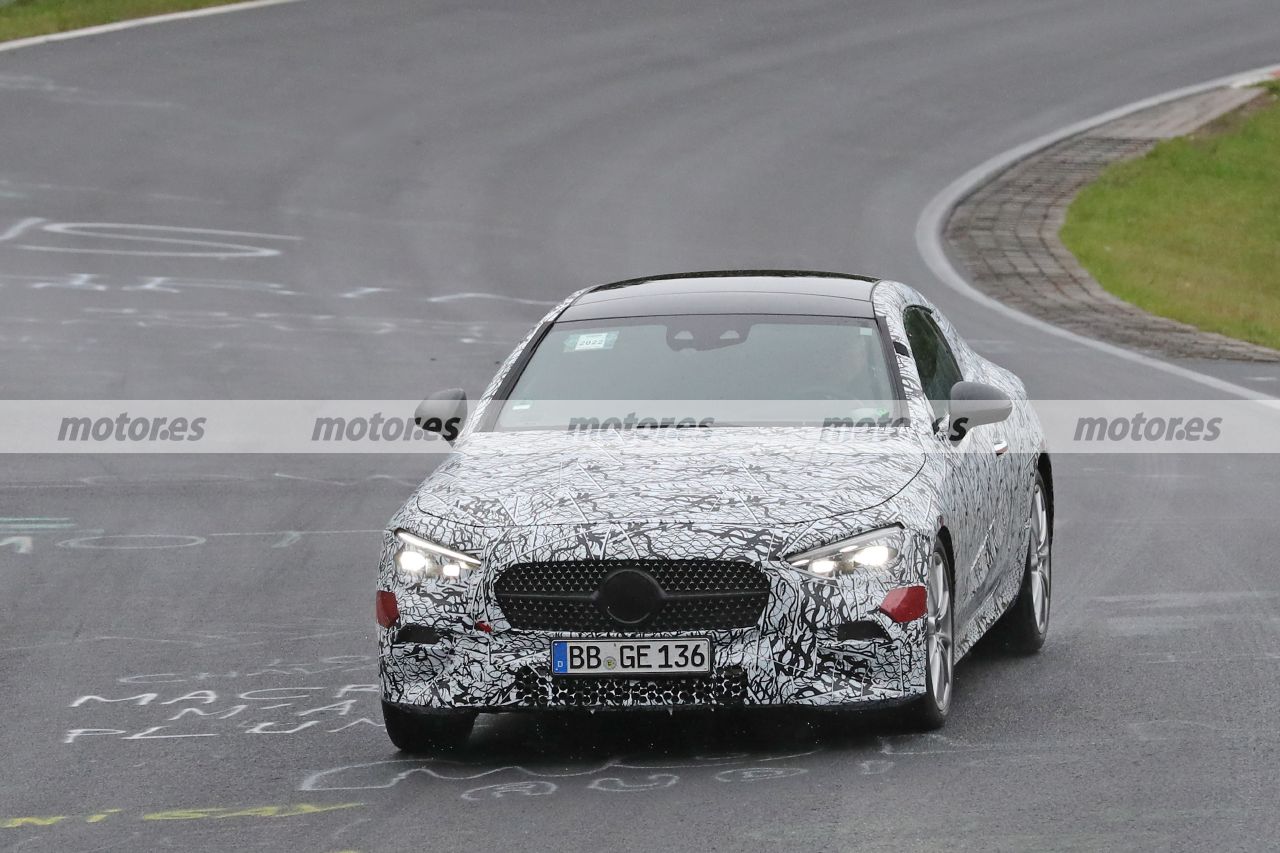 The prototypes of the new Mercedes CLE Coupé have been seen in a new test day at the Nürburgring. The firm of the star faces the last phases of the development of this new coupé that will arrive in 2023, revealing part of its interior design.

The prototypes of new Mercedes CLE Coupe They continue with their testing program, without disheveled or uncovering their camouflage in the least, despite the fact that their set-up is already in the final stretch. This time, the new two-door sports model has been hunted down on the circuit of Nurburgringrevealing some special details that until now had not been seen.

The spy photos of the new coupé of the star brand, which merges the C-Class Coupé and the E-Class Coupé into a single model, show the special finish of multiple chrome stars of the radiator grille typical of the «AMGLine», which will be accompanied by a bumper with more sporty lines. The headlights have also been uncovered somewhat more, revealing sharper headlights. At the rear of the CLE Coupé, the slim taillights continue to sport a sinuous curvature of the position light.

Index hide
1 The new Mercedes CLE Coupé arrives in the summer of 2023
1.1 Test BMW 430i Cabrio, the perfect companion

The new Mercedes CLE Coupé arrives in the summer of 2023

But, the surprise of these snapshots is the interior. The new sports car will have a dashboard copied directly from the C-Class, with the large 10.25-inch digital display in the instrument panel, and with the new touch screen that occupies the center console and is integrated into the transmission tunnel. The star brand has not even bothered to change any detail of the dashboard, keeping even the shape of the three air outlets of air conditioning.

Read:  BMW presents new versions and equipment in its range for 2022

And it is that, despite the fact that its proportions grow considerably and it is positioned halfway between the two-door models of the C-Class and E-Class, in reality, the German brand intends to maintain its Closest location to immediate rival Munich against the exclusivity of a higher segment. In any case, the new Mercedes CLE Coupé will have an interior with five seater and with a generous cargo volume.

The new Mercedes CLE Coupé will arrive with engines of 2.0 and 3.0 liter in-line four and six cylinder petrol and diesel turbo, in addition to a PHEV version that we have seen in tests. An option that will offer high power and performance, with minimal consumption and emissions, and a generous electric range of up to 100 kilometres. The new sports car will debut early spring 2023delivering units at the end of next summer.

a peek into BlockFi’s secret finances… not pretty

Pharmacist reveals possible parasite that you may have inside

Woman kills her terminally ill husband inside a hospital