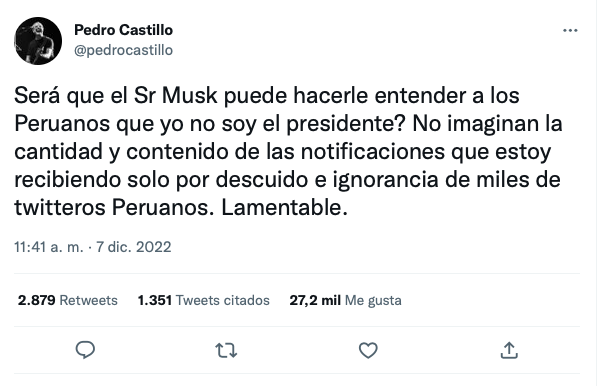 Social networks have become a tool widely used by people around the world, especially when it comes to criticizing and denouncing. Recently, the case of an Internet user identified as Pedro Castillo has gone viral on the social network Twitter, after begging Elon Musk for help, after receiving hate from Peruvian tweeters who confuse his account with that of the president accused of “rebellion and conspiracy.” in Peru.

In context, this Wednesday the political scene in Peru has become a trend throughout the world, especially in the region after its president tried to dissolve Congress and decree an emergency government.

Let us remember that the president Pedro Castillo, who won the presidential elections mounted on his horse and assumed power in July 2021, faced this week the third attempt by Congress to remove him due to corruption accusations against him. Tired of dealing with the legislature, he announced his decision and two hours later he was detained by the Peruvian prefecture and his own escort, and is currently being detained in flagrante for rebellion and conspiracy.

In this sense, information and trends in social networks have spread like wildfire, where people, especially Peruvians, go to these digital platforms to criticize on the subject. So far, the trend on Twitter with the name of the president registers more than 700,000 tweets, most of which are hate, about the poetic situation in that country.

Without a doubt, the digital world has witnessed many changes in the world, where Internet users share everything about their lives on these networks.

The story of a tweeter has drawn attention on the blue bird social network, and it is that the Internet user who identifies himself as @PedroCastillo makes a peculiar request to Elon Musk, who is the new owner of Twitter, to clarify that he ” He is not the president of Peru” and thus stop receiving messages from Peruvian citizens.

Read:  From complaining in networks to "famous" in Venga la Alegría

Could it be that Mr. Musk can make Peruvians understand that I am not the president? You cannot imagine the quantity and content of the notifications that I am receiving only due to the carelessness and ignorance of thousands of Peruvian twitterers. Regrettable.

As mentioned by the Internet user, who is a musician, and has a community of more than 12,000 followers, he has received a large number of notifications from Peruvian Twitter users outraged by the actions of their president.

The publication has gone viral, reaching more than 20 likes and various comments from the digital community that laugh at the situation and even help him spread his message.

“And you’re not interested in being the president now? The position is vacant and surely you will not do worse than the previous one ”, says one of the comments.

“Of course you’re not president, you’ve just been ousted, you fool,” says another comment.

“My friend, those are the consequences of having an important name for the moment like yours. Enjoy the messages and the momentary fame you have. In addition, you Don’t carry those twitter on your shoulder. Stay calm and enjoy life and the moment, “wrote another tweeter.

“I have been bullied since I was a child”: a young man named Sergio Andrade reveals the importance of personal branding

Is Bad Bunny looking for you on a dating app?