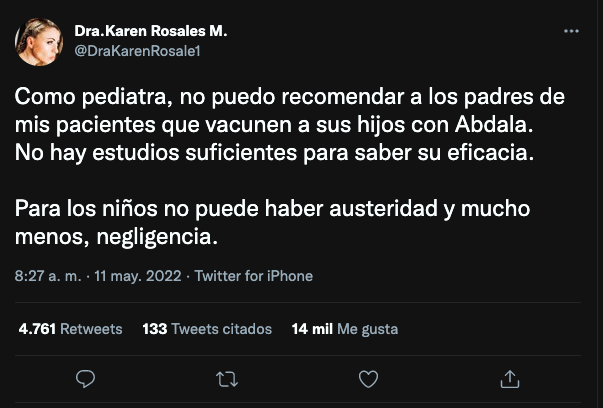 After more than two years of health emergency, Mexico has achieved a stability that offers hope. In recent weeks, the lowest number of new infections since the start of the pandemic has been achieved. At the same time, the immunization campaign has already achieved its first goal of protecting most adults. But now there is a strong controversy over the announcement that the Cuban Abdala vaccine will be the one that will be applied to children.

Based on what was announced by the federal government, the biological developed in Cuba will be applied to infants from two to 11 years of age in our country. But although everyone agrees that everyone should receive the immunization, the disagreement is regarding the brand chosen for the inoculation.

For months it has been requested that children should also receive protection against this new disease. In fact, from 2021 several countries began their respective immunization campaigns among minors.

Index hide
1 What do the experts think?
2 Efficacy in adults
3 Origin of your name
4 For now, what is your opinion that the Cuban vaccine is applied to Mexican children?

What do the experts think?

In this sense, the input developed by Pfizer is the one that enjoys the greatest acceptance for its application among the smallest. Through pharmaceutical research, it has been verified that it works correctly and its side effects are minimal.

On the other hand, the biggest problem with the Abdala immunization is that it does not have support. For the same reason, the pediatrician Karen Rosales used her social networks to show her position. She is clearly against applying the Cuban vaccine to children. She states that there are not enough studies to know its effectiveness. “For children there can be no austerity and much less negligence.”

As a pediatrician, I cannot recommend the parents of my patients to vaccinate their children with Abdala.
There are not enough studies to know its effectiveness.

For children there can be no austerity and much less negligence.

Although it is not the only case because several of his colleagues think the same. In fact, The Abdala vaccine only has emergency use permission from the Federal Commission for the Protection against Sanitary Risks (Cofepris) in adults but not in children.

Read:  The Golden Retriever and six other ideal breeds for children that will make their childhood happier and more doggy

Similarly, this input lacks the approval of the World Health Organization (WHO). Therefore, those who receive it are going to have problems if they plan to travel to other countries. It’s the same situation adults face with the Russian Sputnik V vaccine.

On the other hand, according to what was observed in clinical trials, the Abdala vaccine offers an efficacy of 92.28 percent when the three doses are received two weeks apart from each other. Although that is only in adults because that is the population in which the investigations were carried out.

The The Abdala vaccine is not vectorial and does not work through mRNA technology, but rather is protean. This means that it carries a part of the spike protein that the virus uses to bind to human cells. While it binds to receptors on the virus’s own spike protein, triggering an immune reaction.

Origin of your name

The Cuban nation decided to name its new vaccine after a famous dramatic verse by independence hero and national icon José Martí. In the verse, the young hero, Abdala, heads off to war to defend his homeland, full of patriotic fervor no matter how strong and powerful the enemy is.

For now, what is your opinion that the Cuban vaccine is applied to Mexican children?

Green tea can be very healthy, but these are the contraindications to keep in mind

How the Web3 space is validating the work of digital artists