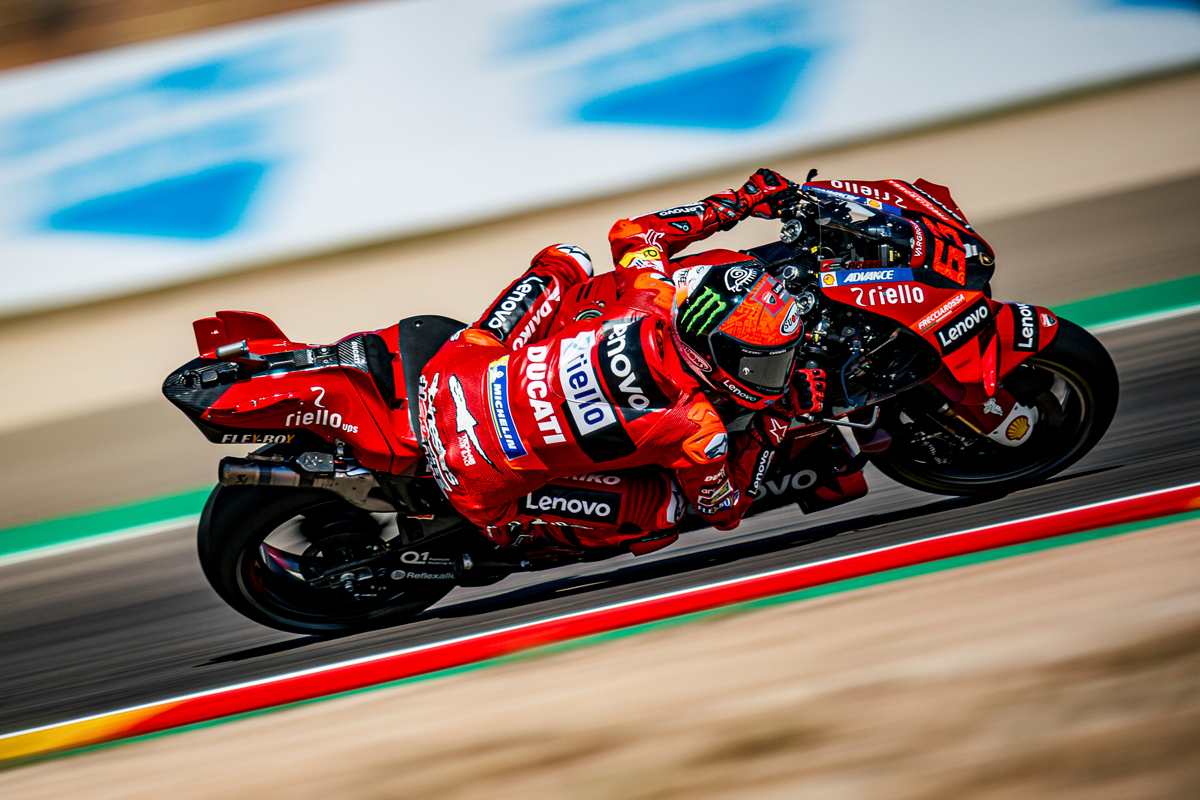 Pecco Bagnaia continues in a state of grace and will start on pole at the Aragon GP. The Italian driver has set a record lap to start first in MotorLand. Aleix Espargaró and Fabio Quartararo will start in the second row.

Pecco Bagnaia is determined to turn the MotoGP World Championship around. The four victories that he has added in the last four Grand Prix prove it. And in MotorLand he has laid the foundations to get the fifth. With a record lap, Bagnaia has conquered the pole in Alcañiz after signing a lap of 1:46.069. Jack Miller and Enea Bastianini accompany the Italian in the front row.

The history of the Aragon GP classification began in FP3. Among other things because Marc Márquez went to the ground and Aleix Espargaró could not get into the top ten. Both were forced to go through Q1, with Maverick Viñales and Johann Zarco as rivals for the last two tickets to Q2.

Nevertheless, Aleix Espargaró was the only one to meet expectations. The Aprilia rider took the best time in Q1 with a time of 1:46.569, even after throwing his first lap attempt overboard to avoid giving Marc Márquez the wheel. Johann Zarco managed to follow in the footsteps of #41 on his way to Q2, leaving Marc Márquez sidelined.

With everything, the loser of Q1 was Maverick Viñales, since the #12 crashed in the final stretch of the session. A mishap without consequences, but one that will surely have stung Mack, not so much for not getting a good grid position as for the fact that having suffered his first crash in a Grand Prix as an Aprilia rider.

Index hide
1 Pressure for Fabio Quartararo
1.1 Marc Márquez, at the gates of Q2

The Q2 chronicle was written in red Ducati inkwith its captain general in command of operations. Pecco Bagnaia took pole with a time of 1:46.569, shattering the track’s previous record. He was escorted in this ‘comeback operation’ by his current partner Jack Miller and the one who will be his partner in 2023, the also Italian Enea Bastianini.

The good work of the Ducati riders displaced Aleix Espargaró to fourth place. For its part, Fabio Quartararo will start sixth, after Johann Zarco. The leader of the World Cup will not only have to come back, but will also have to do it on a track that does not adapt to the benefits of the Yamaha and in which he suffers to overtake. Doesn’t seem like the best scenario for the devil.

Marc Márquez, at the gates of Q2

The third row of the grid was made up of two other Ducati men and the only Suzuki rider present, as Joan Mir has decided not to compete after practice and will miss both the Aragon GP and the Japanese GP. With this in mind, Marco Bezzecchi and Jorge Martín will be with Álex Rins. Already in the fourth row appear Brad Binder, Miguel Oliveira and Takaaki Nakagami.

The fifth row of the grid is headed by Marc Márquez after staying at the gates of Q2. The #93 has not managed to get past the first round of qualifying and will have to deal with a difficult career start before exhibiting his real pace and highlighting if his arm recovery is better than in his previous return and he can compete without experiencing severe pain as the laps go by.