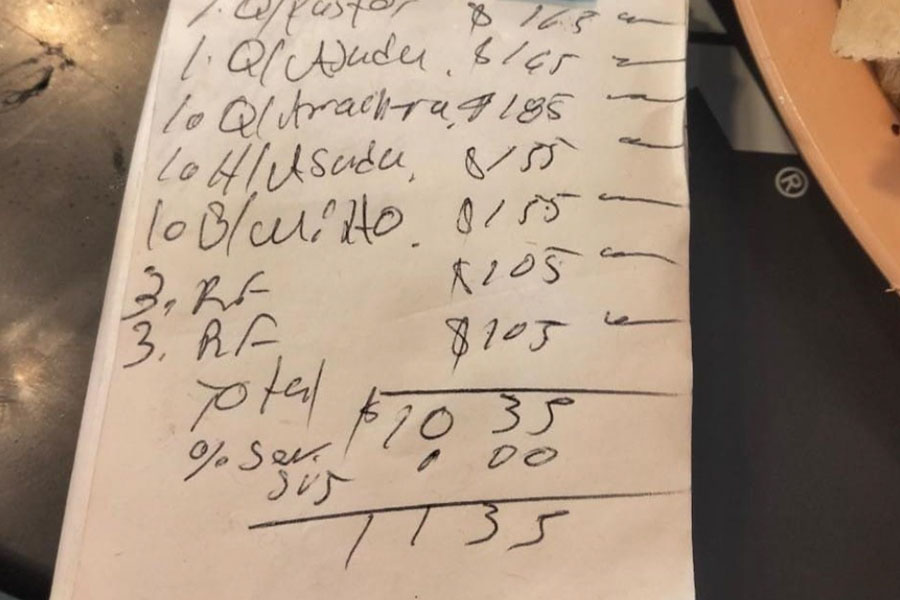 A social media user shared the exorbitant bill he paid at the Strawberry Fair in Irapuato for an order of tacos; However, he was not the only one to report high costs in the gastronomic pavilion, for which the Federal Consumer Protection Agency (Profeco) visited the place and sanctioned some establishments.

Henry Berger, as he identifies himself on Facebook, had never paid so much to eat quesadillas and tacos at a popular cultural event, so he consumed without paying attention to the prices on the menu and then fell in surprise. It was more than a thousand pesos!

On March 21, the young man attended the fair promoted with concerts, cultural activities, rides and traditional food, but it was at the “El Norteño” taqueria where he lost the desire to continue his journey.

“Do not forget to ask costs before buying, because then they take out even the eyes”posted on his account, followed by an image with the list of foods he had consumed.

As can be seen in the image, only one quesadilla cost 160 pesos and the tacos de pastor, flank steak and roast beef exceeded 100 pesos each, without forgetting the Mandatory 100 pesos tip to the waiter.

The post went viral and has been shared more than 300 times on Facebook alone, with comments of annoyance and alert to various public institutions.

Likewise, other Internet users made their own complaints on social networks due to the high costs of the Strawberry Fair:

Read:  They open investigation for the purchase of Microsoft from Activision Blizzard

“They applied it to me the same there and more because they don’t have people.”

“The same thing happened to me at another food establishment at the fair. I did ask and it was better if I stood up and left there.”

“That’s how expensive a quesadilla is and then they’re not good hahahaha and they don’t even give you a letter and you ask prices and they don’t tell you until the end that the story arrives.”

After this and many other complaints about the traditional event that is celebrated in the State of Guanajuato, the Federal Consumer Protection Office (Profeco) intervened with a supervision visit to the Strawberry Fair.

We want you to enjoy the fair with your family and friends, that’s why we received a visit from PROFECO to check that all the businesses in our pavilions have their prices displayed.
Remember, your rights as a consumer come first. Compare prices and choose. #YourFair pic.twitter.com/ZieuCMpb7c

The supervision of the agency culminated in the closure of two businesses and, to avoid another case like that of Henry Berger, Profeco enabled a citizen service module in the gastronomic pavilion of the event, which will end on April 3.

“There are two establishments to which we suspended the sale, precisely because of these complaints that were given “, exposed the municipal president of Irapuato, Lorena Alfaro García.

So far, the 2022 Strawberry Fair has been classified as a success, since after the pandemic it recovered its tourist influx, with more than 52,000 people in the first weekend.

How many bales did you sell? In the style of Alfredo Sámano street vendors “boast” sales

Why is the euro now worth the same (or less) than the dollar?