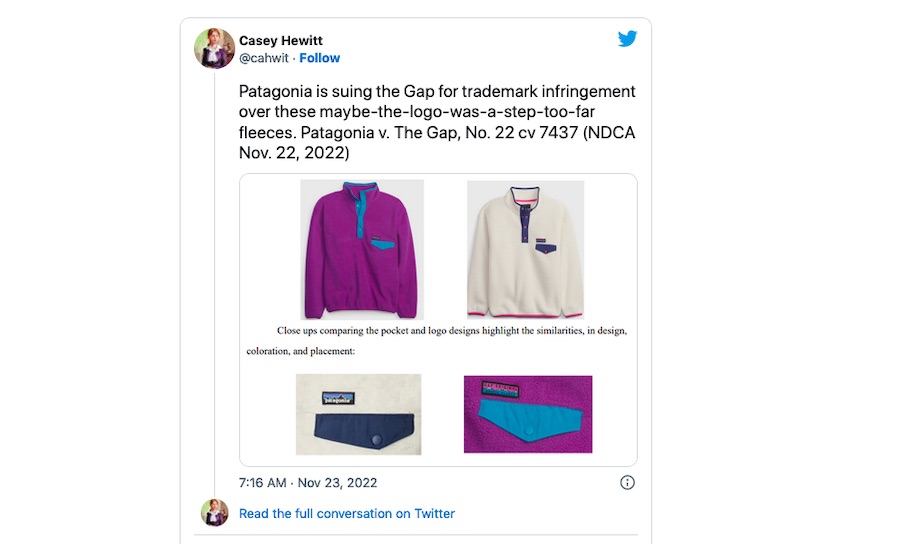 Patagonia is one of the leading brands in the market for outwear and denounced for design theft a GAPafter finding similarities in one of the iconic garments of the famous American brand, which recently made a historic donation of its proceeds to combat global warming.

The famous clothing brand has established itself in the fashion market thanks to the ability of good design to generate sales, hence the legal zeal with which brands defend themselves against copies of certain garments when similarities are found, due to which have marked increasingly valuable activities in the market, which help us understand the importance of creative teams in the most powerful brands in the world. apparel.

Similarities that cannot be justified between a garment recently launched by GAP and the snap-t pullover from Patagonia motivated the latter to denounce its competition for copying the design of its garment, igniting the controversy about the value of design in fashion.

Patagonia is suing the Gap for trademark infringement over these maybe-the-logo-was-a-step-too-far fleeces. Patagonia vs. The Gap, No. 22 cv 7437 (NDCA Nov. 22, 2022) pic.twitter.com/egXu6lFKbR

Information about the alleged complaint was revealed through a note from Reuterswhere the news agency reported that Patagonia proceeded legally in a court in the City of San Francisco, United States, accusing that the synthetic wool jackets that GAP recently launched are an imitation of its famous jacket, imitating not only the fabric, cut and details, also the pocket on the front and the logo in the shape of mountains.

“The adoption of designs and logos with an even greater similarity cannot have occurred by accident,” the agency quotes from the lawsuit consulted to disclose the information.

The design of the famous jacket Patagonia it has become a symbol of the fashion industry, so much so that it has appeared in exhibitions at the Museum of Modern Art in New York and the Victoria and Albert Museum in London, UK.

Faced with the design challenge, brands are at a time when the environment they are defining sets a key standard in communication and most importantly, they define sales strategies, which remind us of the importance of the creative team in a brand, because of its ideas depends on whether a garment scales in sales or becomes a brand crisis for companies.

we already saw it with alessandro michelethe designer who recently departed from gucciafter having made the brand the third most valuable in the apparelaccording to Brand Finance, thanks to the designs of their garments. His departure from gucci It generated controversy due to the value it has as creative talent and the challenge for the Italian firm to find new creative talent, which adds value to the business with the garments they sell.

This characteristic has made the fashion market make a singular commitment, in the way its brands manage to stand out to the consumer, hence the branding collaborations, since they are the safe alternative to launching designs inspired by very popular garment models. , without the risk of a copy lawsuit.