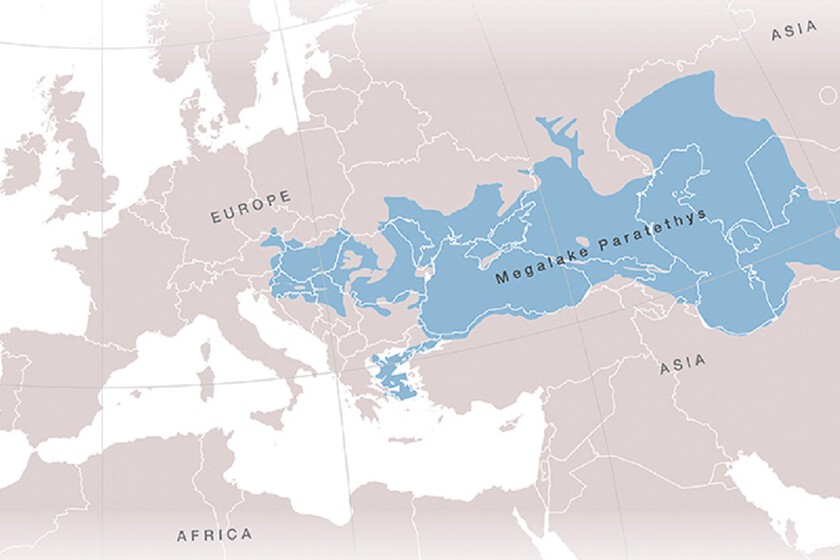 A few months ago, at Magnet we made a list of the largest lakes in the world. We were surprised then to learn that the largest lake (and by far) is the Caspian Sea, a name that curiously already hints at its past, when it was adjacent to the ocean about 11 million years ago. This huge saline lake it is almost the same size as Japan.

Also just as incredible are the five Great Lakes, which run along the Canadian and United States border and form one of the largest collections of fresh water on Earth. This series of interconnected lakes represents about 20% of fresh water in the world and supports more than 100 million people.

So that you can imagine its imposing size, covered an area larger than the current Mediterranean Sea and today it would extend from the Alps above Italy to Kazakhstan in central Asia. It has more than 10 times the current volume of all the world’s freshwater and saltwater lakes and at its peak would have covered an area of ​​about 2.8 million square kilometers, according to data from Science Alert.

Here is a map to give you an idea of ​​the size:


This vast body of water, which formed 9.75 million years ago, once harbored species found nowhere else, including the smallest whales in the world. Its aquatic ecosystem was unique and was home to everything from mollusks and crustaceans to dolphins that evolved over the centuries to adapt to its restricted environment.

And yet, it dried up to nothing millions of years ago.

How is it possible that such a titan could dry up? It is what dozens of scientific studies have endeavored to solve. As water levels dropped and salt levels increased, very few of these creatures survived. Why did all this happen? According to this study published in Natureby four weather-driven cataclysmic events that shrunk the lake, with water levels dropping as much as 250 meters.

According to the researchers, during the worst moment of drying, the lake lost up to 70% of its water and more than two-thirds of its surface. That made the salinity of the water in the central basin of the lake, similar to the contours of today’s Black Sea, it will skyrocket, from almost a third of the salinity of today’s oceans to a level similar to that of seawater.

A change in the weather (sounds familiar to all of us)

The study emphasizes that changes in temperature and precipitation in Eurasia also affected changes on land, for example, open environments replaced forest environments and forest types changed. Although how these evolutions fed and affected each other remains to be discovered, the authors say.

Not only that. In addition to the important change that occurred in the continental vegetation, experts estimate that it was during this stage that the deserts of the Sahara and the Arabian Peninsula were formed. Even, changes in the weather that dried up the lake also influenced the evolution of land animals in those areas, as explained by evolutionary biologist Madelaine Böhme of the University of Tübingen in this other study published in Communications Earth & Environment.

Paratethys ceased to exist between approximately 6.7 million and 6.9 million years ago, when erosion created an outlet on the edge southwest of the lake. This outlet, which is most likely now submerged under the Aegean Sea, gave rise to a small river that gradually found its way to the Mediterranean.

Currently, the only remnants of Paratethys left in our world are the Caspian Sea basin (which is still a lake) and the Black Sea, which is connected to the Mediterranean. The other surviving vestige, the Aral Sea, is about to suffer the same fate as Paratethys, in what scientists consider “one of the greatest ecological disasters caused by man”. It’s a matter of time before they all disappear.